Israeli troops fired rubber bullets and tear gas at a nonviolent protest against the separation wall near the West Bank village of Bilin. Several protesters were injured including the Nobel Peace laureate Mairead Maguire, who was shot with a rubber bullet. She joins us on the line from Ireland. [includes rush transcript]

AMY GOODMAN: Israeli forces have killed eight Palestinians over the past two days, including a 17-year-old girl and a Palestinian police officer. Meanwhile, Israeli troops fired rubber bullets and tear gas at a nonviolent protest against the separation wall near the West Bank village of Bilin. Several protesters were injured, including the Nobel Peace Prize winner Mairead Maguire. She was shot with a rubber bullet. She returned yesterday to Ireland, where she joins us now on the line. Welcome to Democracy Now!, Mairead Maguire.

MAIREAD MAGUIRE: Good afternoon, Amy, and to all your listeners.

AMY GOODMAN: Can you tell us what happened?

MAIREAD MAGUIRE: Yes. I was invited with my friend to attend a nonviolent conference in Bilin, a village outside Ramallah, and to give a talk there, which I did. At the end of the conference, we were invited to participate in a nonviolent demonstration with some of the Palestinian members of Parliament, including Dr. Barghouti, and Israeli peace activists and local villagers and international visitors from over several hundred countries so — or several hundred international peace activists from over 20 countries.

We walked along to try to walk up toward the separation wall, and it was a totally nonviolent protest. And we were viciously attacked by the Israeli military. They threw gas canisters into the peace walkers, and they also fired rubber-covered steel bullets. As I tried to move back and helping a French lady, I was shot in the leg with a rubber-covered steel bullet, and the young Israeli soldier who shot me was only 20 meters from me. I was stunned by it, and then later on, after having some treatment by the ambulance medics, I went back down to the front line with the peace activists, and we were again showered with gas. I was overcome and had a severe nosebleed and had to be taken by stretcher to the ambulance and treated.

And I witnessed there a Palestinian woman, maybe around in her sixties, and an old Palestinian man with blood on his face. These were over 25 unarmed peace people who had been viciously attacked by the Israeli military. And it was a completely peaceful protest. It was absolutely unbelievable. I never in all my years of activism witnessed anything so vicious as from the Israeli military.

AMY GOODMAN: We’re talking to the Nobel Peace Prize laureate Mairead Maguire, who just came from the West Bank town of Bilin. Can you describe the wall there, the wall that you were protesting?

MAIREAD MAGUIRE: Yes, the wall is being built right through the village of Bilin, and the villagers’ land is being cut off. This wall is actually not so much a security wall, as it is really a wall that is taking in yet more of Palestinian land. The Palestinians have lost two-thirds of their land. When I was walking along that road, my interpreter from the press conference earlier in the day told me that he had owned 10 acres of land on the other side of the wall, that the Israeli authorities had moved in, confiscated his land, uprooted his olive trees, which are 400 years old, and taken the olive trees to Jerusalem, and they were planted in Israeli settlements in Jerusalem.

So this is a wall, which is — it is an apartheid wall. It’s dividing the people. But this is also by domination and control, which is what the word “apartheid” means. So, I mean, this kind of repression of the Palestinian people and the occupation which is going on — now, the anniversary is June the 9th, when it’s 40 years occupied — this will not bring peace or security to Israel, which we all want to see. This will bring division and suffering, uninhibited. The international community needs to demand that the occupation end.

AMY GOODMAN: You won the Nobel Peace Prize, Mairead Maguire, in 1976. Why? What actions were you engaged in then, some 30 years ago?

MAIREAD MAGUIRE: Well, in 1976, we were in a very dangerous position in Northern Ireland. We were in the brink of civil war. Three of my sister’s young children were all killed. And we started a peace movement. Our message was, this problem will not be solved through violence; it can only be done through dialogue and through nonviolence. And today in Northern Ireland, we are very glad we have our peace, and we are moving towards a more normal society. I believe the message from Northern Ireland, that you cannot solve these problems through state violence, militarism, paramilitarism, suicide bombs; you cannot solve these problems through violence, but only through nonviolence. That’s a message that is beginning to be heard more and more in Israel and in Palestine.

AMY GOODMAN: Mairead Maguire, I want to thank you for being with us, joining us from Ireland, just having returned from the West Bank. 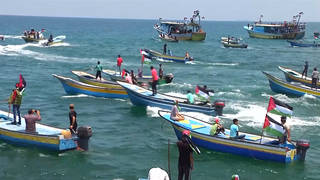