In Burma, tens of thousands of monks and protesters are marching through the city of Rangoon today in defiance of military orders. On Monday, Burma’s military junta warned that it was ready to take action against the anti-government protests that have rapidly spread across the country. We speak with Jeremy Woodrum, co-founder of the US Campaign for Burma. [includes rush transcript]

AMY GOODMAN: In Burma, the ruling military junta is facing the most vocal popular uprising against its rule in nearly two decades. Tens of thousands of monks and civilians have defied military warnings and have staged new anti-government protests. On Tuesday, in the city of Rangoon, as many as 100,000 people took to the streets. A day earlier, Buddhist monks dressed in maroon robes have been leading the marches. They vow to continue holding marches until they’ve “wiped the military dictatorship from the land.” The protests are the largest in Burma since 1988, when the military junta crushed a popular uprising by killing some 3,000 people.

Over the weekend, monks marched to the home of the Nobel Peace laureate, pro-democracy leader Aung San Suu Kyi, who’s been under house arrest since 2003. Military authorities allowed Suu Kyi to briefly greet and pray with the monks. It was her first public appearance in more than four years.

On Monday, the ruling junta warned it was ready to take action against the monks to break the protests. It repeated its warning in state media Tuesday, ordering monks not to get involved in politics, accusing them of allowing themselves to be manipulated by the foreign media.

President Bush is expected to announce new sanctions on the Burmese junta in a speech today. This is State Department spokesperson Tom Casey.

TOM CASEY: We certainly would call on the regime to exercise restraint in the face of these protests and also to release those that they’ve imprisoned for peacefully expressing their views over the course of the last few days.

AMY GOODMAN: Jeremy Woodrum is co-founder of the US Campaign for Burma. He’s helped spearhead a successful nationwide boycott of the Burmese military government and organized delegations to visit refugee camps near the Burma-Thailand border. He joins us from Washington, D.C.

Jeremy, what is the latest? What is happening on the streets of Burma today?

JEREMY WOODRUM: Well, I’ve been on the phone all night. And, apparently, inside Burma, in the capital city, an additional 100,000 people — monks, civilians, students and everyday civilians — are marching against the military regime. Also, what’s not being reported as widely in the media is the demonstrations are taking place across the country. In one other city alone, at least 50,000 additional people were marching there, as well. So things are growing every day.

AMY GOODMAN: What do you think is going to happen?

JEREMY WOODRUM: I think the protests — one of two things: either the protests are going get much, much larger, or the military regime is going to crack down. Unfortunately, we’ve received some ominous news that the military is preparing a crackdown. They’ve ordered some soldiers in the military to shave their heads, so that they could pose as monks, and then those fake monks would attack soldiers to incite a military crackdown. The regime has done this before in Burma, and we believe they would do so again.

JEREMY WOODRUM: Sure. Well, that was a very emotional time for her and for the people of Burma. You know, for the Burmese people, Aung San Suu Kyi is like Nelson Mandela. She singularly embodies their hopes and aspirations. Very uncommon to find someone like that anywhere in the world, in any country, but she is it. And, apparently, for a brief period of time, the regime relaxed their restrictions on her — she’s been under complete house arrest for the past four years — and allowed monks to march past her house. When they met her, she started crying, because she was overwhelmed with the emotions, I believe, of seeing the courage and bravery of the Burmese people. They continue to act nonviolently in the face of severe repression.

AMY GOODMAN: Just remind us what happened in 1988, when the people rose up like they have this week.

JEREMY WOODRUM: Yeah, well, the circumstances were very similar. The causes were very similar. And the military regime reacted by opening fire on nonviolent demonstrators. Keep in mind, not a single demonstrator has done anything, thrown a single rock, stone, used violence in the least. And in 1988, it was a similar situation, and the regime executed between — we don’t know the exact number — somewhere between 3,000 and 10,000 people. They just opened fire on demonstrators in the streets. And we greatly fear that happening again.

JEREMY WOODRUM: Yeah. That is an important step. We should squeeze the military leaders on their personal finances. And that’s what those sanctions are.

But at the same time, the real thing that needs to be done is the United Nations Security Council needs to step in and take action. They are the body in the world that has the power to restrain Burma’s military regime. The problem is that China has almost single-handedly and unilaterally paralyzed the U.N. Security Council. They haven’t made a single statement. They haven’t made a single resolution. They have done absolutely nothing. They’re just sitting on the sidelines while Burma burns. It’s hugely frustrating to see one country, China, be able to block the entire will of the international community.

AMY GOODMAN: Jeremy Woodrum, I want to thank you for being with us, with the US Campaign for Burma. We’ll certainly continue to follow events there. 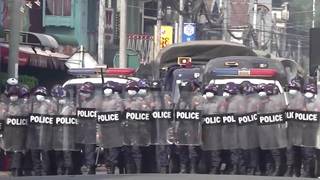