Showdown in Nevada: Unions Face Off Over Casino Caucus Sites

A federal judge is expected to rule on a lawsuit that seeks to ban caucus sites in nine Las Vegas strip hotels ahead of Nevada’s caucuses Saturday. Critics say the suit would disenfranchise the mostly Latino and female workers organized by the powerful Culinary Workers Union, which has endorsed Barack Obama. The suit was filed days after the endorsement by the Nevada State Teachers Union and several individuals backing Hillary Clinton. [includes rush transcript]

StoryFeb 19, 2020Nevada Culinary Workers Union Member: I Would Trade My Union Healthcare for Medicare for All

JUAN GONZALEZ: Democratic candidates are campaigning in Nevada ahead of the state’s caucuses on Saturday. Nevada is the first heavily Latino state to vote in the 2008 race. Now, a showdown looms between the state’s powerful Culinary Workers Union and the Nevada State Teachers Association over accusations of vote suppression.

Last March, the Democratic Party agreed to set up so-called “at-large caucus sites” in nine Las Vegas strip hotels on Saturday to accommodate workers who can’t attend caucuses in their neighborhoods. The largely Latino and female workforce in almost every casino on the Strip is organized by the 60,000-member Culinary Workers Union, which has endorsed Barack Obama.

Days after the endorsement, the Nevada State Teachers Union and individuals backing Clinton filed a lawsuit alleging that the casino sites create a “preferred class of voters.” The teachers union has not endorsed a candidate, but Debbie Cahill, the union’s deputy executive director, is a Clinton supporter. The law firm handling the suit also has ties to the Clinton campaign. Clinton ally and former Nevada Congressman James Bilbray is an attorney at the firm. The federal judge has set a hearing for today to help determine the legitimacy of the at-large caucuses.


AMY GOODMAN: We go now to Las Vegas, where we’re joined on the phone by Hugh Jackson, a longtime Las Vegas journalist. He’s been following this story. He blogs the Las Vegas Gleaner online.


Welcome to Democracy Now!, Hugh. Tell us about this showdown. What is happening in court, the story of the culinary workers versus the teachers?


HUGH JACKSON: Well, as you mentioned, they’re going to court this morning. I believe that’s as early as 9:00 my time, which I guess would be noon your time. And, you know, the consensus — you never know what a judge is going to do, obviously. The consensus seems to be building out here that the case is probably going to get tossed, which means that the process goes forward.


But meantime, you know, after this caucus Saturday, all of these campaigns are going to pick up their marbles and go start calling each other names and playing tricks on each other somewhere else. And Nevada’s union movement and Democratic Party are going to have to deal with this bloodbath that’s been opened up out here during the process.


AMY GOODMAN: Well, explain what’s happening. Explain what these forces are, what the argument is, what the caucus sites are in the casinos.


HUGH JACKSON: Well, Nevada’s caucus started — of course, this is the first year that Nevada has had a caucus that has been meaningful, because it was moved up the calendar. And from the get-go, all of the candidates have put their sights on the culinary union, 60,000 workers. Those workers are, as the union likes to say, very good at going to meetings. And in a caucus, particularly in a state that hasn’t had one, it has long been thought that if anybody can get people to meetings and hold some influence over the event, that it would be the culinary union.


So when this thing really kind of effectively kicked off publicly in March, appropriately enough, it was in a rally that was held in the parking lot at the Culinary, and they brought out 5,000 people on the same night that UNLV had a Sweet 16 game on national TV, I might add. I think it was kind of impressive. Clinton showed up, Obama showed up, Richardson, several of the other candidates. And throughout the course of many, many events at the — for the Culinary — at the Culinary ever since, all of the candidates, including Clinton, have gone forward and told them how important they are, how crucial they are to the process, how fantastic it is that organized labor is going to have an early voice in the nominating process, of course, currying favor and courting the union’s endorsement.


Lo and behold, when the endorsement — it was announced last week on Wednesday, it only took two days for the Clinton campaign people — or Clinton supporters, in any case, to be more accurate — to determine that, gosh, as much as we like the Culinary, this process isn’t any good, because it appears to give the Culinary more representation or an unfair weight in representation of the caucus system.


JUAN GONZALEZ: Hugh, I’d like to ask you, when this thing was originally decided, obviously it’s not a general rule for workers in — large groups of workers in any worksite to be able to caucus, and specifically for the hotel workers. Were any of the unions, back when it was approved, raise questions about the unfair advantage this would give to a particular union?


HUGH JACKSON: No. And see, these at-large sites, as they’re called, that are on the Strip, I mean, they’re designed primarily for culinary workers, obviously, but anyone who works a shift job within two-and-a-half miles of the Las Vegas Strip can participate. But, you know, these were touted from the start as just yet another neat and unique thing about the Nevada caucus process. And gosh, everybody, including some of the people who are plaintiffs in this suit, were saying, “Yeah, rah-rah! This is going great! This is really going to be cool!” Nobody said a word until last week. So it really did come up on people at the last minute.


AMY GOODMAN: Well, NBC’s Tim Russert asked Hillary Clinton about the lawsuit in Nevada and concerns of the caucuses disenfranchising shift workers on this past Sunday’s edition of Meet the Press.


TIM RUSSERT: In Iowa, you expressed concern that the time of the caucus prevented a lot of shift workers from voting. They were disenfranchised.


TIM RUSSERT: We may confront the same thing in Nevada. They have now scheduled — the state party there — to have caucuses at the place of work so that shift workers can show up — many people, minorities particularly. Supporters of yours have filed a suit to try to stop having those caucus locations at the workplace. Do you support that suit?


SEN. HILLARY CLINTON: Well, first of all, I don’t think it’s supporters of mine. Some —- there seems to be some misunderstanding about that. I was asked yesterday in Reno. The teachers union, who brought the suit, has not endorsed me. And so, I think their concern is to have as many people participate as possible, which is certainly what it should be. This is now in the courts. The courts and the state party will have to work it out. But I don’t want to disenfranchise anybody. I want -—


TIM RUSSERT: So why not drop the lawsuit and let people vote?


SEN. HILLARY CLINTON: Well, that’s up to the people who brought it. I think that —- well -—


TIM RUSSERT: But what’s your view?


SEN. HILLARY CLINTON: But, Tim, as I understand it, there are a lot of people working at many places who won’t be able to work. The places for doing the caucus are not at their workplace across the state. I mean, that’s —- you know, the caucus idea is for neighbors to get together to argue and talk about their choices. The problem is that if you have a limited period of time, as I pointed out long before anything happened in Nevada, you’re going to essentially leave people out who can’t be there during those one— to two-hour period of time. And so, I — you know, I haven’t read the lawsuit. The coverage of it seems to suggest that some people are saying, “Well, wait a minute. What about us? Those are not our workplaces. We have to be at work. How are we going to participate?” It’s up to the courts to work that out.

AMY GOODMAN: That’s Hillary Clinton on this past week’s Meet the Press. Bill Clinton, the former president, also got in an argument with reporters in Oakland — in fact, the mayor, Ron Dellums, was trying to pull him away — over this issue. Hugh Jackson?


HUGH JACKSON: Yes, I saw some of the clips of that. And Bill has certainly been a lot more forceful in defending the suit than Hillary has. But again, you know, these people were — thought this system was fantastic, were highly interested in getting the Culinary’s endorsement, until it went to Obama. And then, suddenly they’re concerned about, as Bill Clinton put it, “one man, one vote.”


I also think that that’s a particularly specious, disingenuous argument, frankly, this calling of “one man, one vote,” because the caucus system, as you folks have probably heard people say, is — well, in my opinion, it’s just awful. And, you know, we already have all kinds of misrepresentations. For instance, in the rural counties out here in Nevada, people get more — their votes are weighted more heavily than they are in urban areas. If Clinton supporters, or if Bill Clinton, for that matter, was so deeply concerned about the notion of “one man, one vote” — “one person, one vote” — being respected in this process, they would not be suing to end the at-large caucuses on the Strip. They would be suing to end the whole caucus itself, because it violates that principle. So their consistency is — well, it’s not there.


AMY GOODMAN: Hugh Jackson, I want to thank you for joining us, independent journalist based in Las Vegas, blogs at lasvegasgleaner.com. The Las Vegas — the Nevada caucuses will take place on Saturday. When we come back, we’ll go to Michigan, where the primary just took place, and we’ll look at the state of the union movement around the country with the editor of Labor Notes.

Unemployment, Foreclosure, Deunionization: A Look at the State of the Economy and Organized Labor in Michigan

NEXTUnemployment, Foreclosure, Deunionization: A Look at the State of the Economy and Organized Labor in Michigan 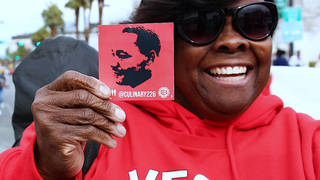 Nevada Culinary Workers Union Member: I Would Trade My Union Healthcare for Medicare for All