New York City, NY – Award-winning journalist and host of Democracy Now! Amy Goodman is the first journalist to receive the Right Livelihood Award, widely recognized as the world’s premier award for personal courage and social transformation. The annual prize, also known as the Alternative Nobel, will be awarded in the Swedish Parliament on December 8, 2008.

The Right Livelihood Award was established in 1980 to honor and support those “offering practical and exemplary answers to the most urgent challenges facing us today”. Goodman has been selected for “developing an innovative model of truly independent grassroots political journalism that brings to millions of people the alternative voices that are often excluded by the mainstream media.”

Pioneering the largest public media collaboration in the country, Democracy Now! is a daily grassroots, global TV/radio/internet news hour airing on more than 750 public radio and television stations and at democracynow.org.

Goodman said, “I am deeply honored that grassroots, independent journalism and the hard work of my colleagues at Democracy Now! are being recognized in these critical times. I strongly believe that media can be a force for peace. It is the responsibility of journalists to give voice to those who have been forgotten, forsaken and beaten down by the powerful. It is the best reason I know to carry our pens, cameras and microphones out into the world. The media should be a sanctuary for dissent. It is our job to go to where the silence is.”

Goodman and two Democracy Now! producers were arrested last month at the Republican National Convention while reporting on street demonstrations. Charges were dropped after widespread public outcry. The video of Goodman’s arrest was among the most watched YouTube video’s during the convention week. It has now been viewed over 860,000 times.

Amy Goodman writes a weekly syndicated column with King Features which runs in major newspapers throughout North and South America. She is co-author with her brother, journalist David Goodman, of three New York Times bestsellers: Standing Up To the Madness: Ordinary Heroes in Extraordinary Times; Static: Government Liars, Media Cheerleaders, and the People Who Fight Back; and The Exception to the Rulers: Exposing Oily Politicians, War Profiteers, and the Media That Love Them.

Goodman’s reporting on East Timor and Nigeria won the George Polk Award, the Robert F. Kennedy Prize for International Reporting, and the Alfred I. DuPont-Columbia Award. Her other awards include the first ever Communication for Peace Award presented by the World Association of Christian Communication, the Puffin/Nation Institute Award for Creative Citizenship, The Paley Center for Media “She Made It” Award, and the Gracie Award for American Women in Radio and Television Public Broadcasting. Goodman has also received awards from the Associated Press, United Press International, and the Corporation for Public Broadcasting.

Goodman shares the 2008 Right Livelihood Award with Krishnammal and Sankaralingam Jagannathan of India, and their organisation, Land for the Tillers’ Freedom, for their work dedicated to realising in practice the Gandhian vision of social justice and sustainable human development; Asha Hagi of Somalia “for continuing to lead at great personal risk the female participation in the peace and reconciliation process in her war-ravaged country.”; and Monika Hauser of Germany, gynaecologist and founder of medica mondiale, “for her tireless commitment to working with women who have experienced the most horrific sexualised violence in some of the most dangerous countries in the world, and campaigning for them to receive social recognition and compensation.”

Video of Goodman Arrest at RNC 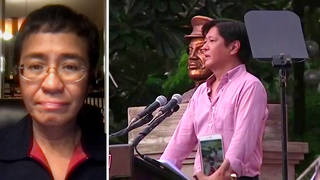