May Day: Tens of Thousands Prepare to March Across the Country as Labor Struggle Linked to Immigrants Rights

Tens of thousands are expected to march in cities across the country today, linking immigrant rights to May Day for the third year in a row. The major demands include legal status for undocumented migrant workers and an end to the raids and deportations that have torn families apart. We speak to Anike Tourse of the Coalition for Humane Immigrant Rights of Los Angeles. [includes rush transcript]

AMY GOODMAN: Today, we’re talking about the major protests that will be taking place in Los Angeles and around the world today, May Day, historic day, one of the biggest rallies right here in Los Angeles.


Two years ago, over a million people took to the streets and participated in what was called the Great American Boycott. In 2007, the May Day rallies for comprehensive immigration reform continued but were marred by incidents of violence, with the Los Angeles Police Department firing rubber bullets at protesters in MacArthur Park.

This year, the LAPD claims to have prepared more restrained tactics that include the use of an electronic device flashing crowd-control warnings in English, in Spanish, in Mandarin and Korean.

To discuss today’s events and the state of the immigrants’ rights movement, we’re joined by Anike Tourse of the communications — of CHIRLA, the Coalition for Humane Immigrant Rights of Los Angeles, joining us here in Los Angeles. Welcome.


AMY GOODMAN: Talk about the protest plan today and what happened in the past.


ANIKE TOURSE: Well, I will say today we’re expecting a very exciting day, about a minimum of 25,000 people and upwards. We have marches that are coming from two points in Los Angeles, and we’ll converge together at one point at Fifth and Broadway. One group is going to be starting over at MacArthur Park. Another is going to be starting over at First and Broadway. And we also have a whole group — we have about 4,000 workers coming from the factory American Apparel. That should be extremely exciting.


ANIKE TOURSE: Well, the American Apparel — you’re probably aware that Dov Charney, the owner, has a big “Legalize LA” campaign. He’s been a big proponent of immigration reform for many years. And he is actually going to be paying all of his workers today to actually get out there and march. So it should be quite something.


AMY GOODMAN: And what is happening so last year isn’t repeated, when the police moved in on the protesters at MacArthur Park?


ANIKE TOURSE: Well, I actually was there last year, and it was very scary and very disturbing and shocking for everyone. The police has made repeated claims that there are systems in place, communication in place between the NGOs and between the police to make sure that such a thing doesn’t happen again.


AMY GOODMAN: Describe what did happened.


ANIKE TOURSE: Well, there was the march. The march was a peaceful march. And then at the end of the march there was like a rally in MacArthur Park. It was a big sign of unity, lots of families, lots of community, vendors, music. And then, there was a small group of people that started kind of taunting the police. And when I say “small,” I mean very small. I think it was a maximum of fourteen young people. And I think it started with just a few kids, and these were teenagers, and they were literally just kind of making comments back and forth and just sort of, you know, yelling things at the police.


And the police were not really doing anything about this. The organizers approached the police and asked them, why not separate this small group, isolate them, because they’re disturbing everybody else that’s having this, you know, peaceful event. And at the same time, there were speakers. As I was saying before, there was music. So there were a lot of people that weren’t even aware of this small group. But the police kind of continued to be quiet.


Then there was back-and-forth interim on walkie-talkies. That is where I understood the breakdown in communication had happened. And then, suddenly, you know, there were rubber bullets flying. There was — you know, there was an announcement of, I believe it was — and it was teargas. There was an announcement that everybody needed to disperse. But it didn’t come until after all of these things had already happened, meaning until the bullets were already, you know, going. And people — then there was — people were — the police was dressed in riot gear. They were in a large — a long row, and they were moving towards the group. And it was really terrifying. Then, suddenly, there was a mad scramble.


And what was most scary, to be honest, was to see the families. You know, there were particularly mothers that were looking for kids very quickly or siblings looking for each other. I mean, organizers were organizers, so we were clear about what to do, which was really to get things together and to get going.


AMY GOODMAN: And, of course, the journalists who were attacked at the time —-


AMY GOODMAN: —- those images are very famous, because the police moved in, and they were knocking down reporters, camera people.


ANIKE TOURSE: Yes, I’m very glad you brought that up. I think something to also point out is that that’s largely why this demonstration got so much attention, because there was media that was being attacked. And clearly, you know, how can you blame the media out there just for doing their job? It is important, of course, to underscore that it was equally horrific to see all of these families that were being attacked, as well, and just peaceful community members.


AMY GOODMAN: What you calling for today?


Primarily, we’re looking to see that when the next presidential regime comes in, that there is a change in humane immigration reform. All of these kinds of current tactics, including the raids, which is probably the most horrifying because it gets down to separation of families and, as you just heard, the infringement of human rights violations for all people, including citizens. These kinds of systems, they don’t do anything. They don’t fix our problem. They don’t solve anything for the thirteen-plus million people that are dealing with undocumented status that are already here. They don’t solve the issues with our economy. In fact, things like this, with the raids, they make our economy worse. And we want to make sure that when a new president comes in, that there is immigration reform, is passed in the first 100 days.


AMY GOODMAN: Will the Mayor, Villaraigosa, be marching with you?


ANIKE TOURSE: The Mayor will be there, and he will be marching with us, yes.


AMY GOODMAN: I want to thank you for being with us.


ANIKE TOURSE: Happy to be here. 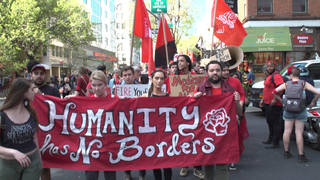