The Department of Homeland Security released a report last week that warned right-wing extremist groups are gaining new recruits by exploiting fears about the economy and the election of the nation’s first black president. We speak with Mark Potok of the Southern Poverty Law Center. [includes rush transcript]

StorySep 02, 2021Was Afghanistan the First “Feminist War”? Examining the Role of “White Feminism” in the Longest U.S. War

JUAN GONZALEZ: Homeland Security Secretary Janet Napolitano is facing calls for her ouster from a number of House Republicans in the wake of a department memo that warned of right-wing political extremism in the United States.


The report, which was released last week, warns that right-wing extremist groups are gaining new recruits by exploiting fears about the economy and the election of the nation’s first black president. The report predicts a worsening economy will to lead more people joining militias and skinhead groups and carrying out individual acts modeled after Oklahoma City bomber Timothy McVeigh.


A handful of Republicans in the House are calling for Napolitano to step down in the wake of the report. House Minority Leader John Boehner said the report includes, quote, “about two-thirds of Americans who might go to church, who may have served in the military, who may be involved in community activities…I just don’t understand how our government can look at the American people and say, ‘You’re all potential terrorist threats.’”

Idaho has long been the center of white supremacist groups in the United States.


Mark Potok is the director of the Intelligence Project at the Southern Poverty Law Center. They recently released a report that finds the number of violent hate groups in the US has skyrocketed since 2000. He joins us via Democracy Now! stream from Alabama.


MARK POTOK: Well, thank you so much for having me.


JUAN GONZALEZ: Mark, your reaction to the controversy now and the calls for Janet Napolitano’s ouster?


MARK POTOK: I think it is completely a tempest in a teacup. You know, the things that Boehner and others have said are very hard to square with actually reading the report. You know, basically, the report has been accused of saying that all conservatives and all veterans are this huge suspect class, people who may, you know, take up arms and start blowing up federal buildings.


The reality is, is when you read the report, it doesn’t say anything remotely like that. You know, the reference to veterans is — what it really says is that white supremacists are interested in attempting to recruit returning veterans because of their skills. It does not say, in any sense, that these people are prone to joining the groups, that we should look at all veterans with a wary eye. And it certainly doesn’t make any suggestion like that with regard to conservatives.


You know, really, I think that this is an attempt to create a great big political storm over an essentially innocuous report. You know, there are a few, what I would characterize as, errors in the report. For instance, it describes the rise of militias in the 1990s as being essentially the result of a recession. Well, there really wasn’t a recession in the ’90s, and that really is not why the militias rose. But essentially, the conclusions, which are — which amount to the idea that we’re at a time when these groups are poised to continue growing, I think is obviously correct.


JUAN GONZALEZ: Now, your group has been charting the rise of hate groups in recent years. The issue of whether the election of Barack Obama has caused a new spur, a new growth in those groups?


MARK POTOK: Well, of course, that only begins to play about July of last year, when Obama actually wins the Democratic nomination. And initially, the reaction of the white supremacist movement is utter horror. Eventually, the leaders, such as they are, begin to say, “Well, maybe if Obama wins, it will be good for us.” David Duke famously wrote last year that if Obama won the election, it would be a, quote, “visual aid to white Americans.” In other words, people would wake up, realize their country had been robbed from them, and rush into these groups.


You know, what we know for a fact is that immediately after the election, on November 5th and 6th, in fact, we saw the servers of at least two major white supremacist groups crash, because they did get a major surge in interest. You know, whether that really translates into a significant growth of the groups or not, I think remains to be seen. But I think it’s quite likely.


JUAN GONZALEZ: Well, Mark, I want to thank you very much, Mark Potok, director of the Intelligence Project at the Southern Poverty Law Center, for being with us.

On Anniversary of 1937 Guernica Bombing, Basque Community in Idaho Looks Back 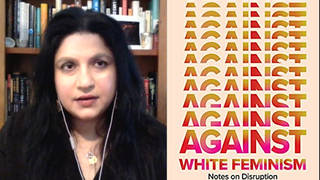 Was Afghanistan the First “Feminist War”? Examining the Role of “White Feminism” in the Longest U.S. War