The confirmation hearings for President Barack Obama’s Supreme Court nominee Judge Sonia Sotomayor continue on Capitol Hill. On Tuesday, Democratic senators praised Sotomayor’s seventeen years on the federal bench, while Republicans repeatedly grilled her about statements she has made during a series of speeches over the years. We play excerpts of the hearings. [includes rush transcript]

StoryJun 04, 2021“Disaster Patriarchy”: V (Eve Ensler) on How the Pandemic Has Unleashed a War on Women


On Tuesday, the questioning of Sotomayor began. Democratic senators praised her seventeen years on the federal bench, while Republican repeatedly grilled her about statements she has made during a series of speeches over the years.


Near the beginning of the hearing, Judiciary Chair Patrick Leahy, a Democrat, asked Sotomayor to explain her 2001 comment that a, quote, “wise Latina” might arrive at a better legal decision than a white man.


SEN. PATRICK LEAHY: So tell us, you have heard all of these charges and countercharges, the “wise Latina” and on and on. Here’s your chance. You tell us — you tell us what’s going on here, Judge.


JUDGE SONIA SOTOMAYOR: Thank you for giving me an opportunity to explain my remarks. No words I have ever spoken or written have received so much attention.


I gave a variant of my speech to a variety of different groups, most often to groups of women lawyers or to groups, most particularly, of young Latino lawyers and students. As my speech made clear in one of the quotes that you referenced, I was trying to inspire them to believe that their life experiences would enrich the legal system, because different life experiences and backgrounds always do. I don’t think that there is a quarrel with that in our society. I was also trying to inspire them to believe that they could become anything they wanted to become, just as I had.


The context of the words that I spoke have created a misunderstanding, and I want — a misunderstanding — and to give everyone assurances, I want to state up front, unequivocally and without doubt, I do not believe that any ethnic, racial or gender group has an advantage in sound judging. I do believe that every person has an equal opportunity to be a good and wise judge, regardless of their background or life experiences.


What — the words that I used, I used agreeing with the sentiment that Justice Sandra Day O’Connor was attempting to convey. I understood that sentiment to be what I just spoke about, which is that both men and women were equally capable of being wise and fair judges.

AMY GOODMAN: Senator Jeff Sessions, the ranking Republican on the Senate Judiciary Committee, also questioned Sotomayor about some of her previous statements about the role of judges.


First, that’s troubling to me as a lawyer. When I present evidence, I expect the judge to hear and see all the evidence that gets presented. How is it appropriate for a judge ever to say that they will choose to see some facts and not others?


JUDGE SONIA SOTOMAYOR: It’s not a question of choosing to see some facts or another, Senator. I didn’t intend to suggest that. And in the wider context, what I believe I was — the point I was making was that our life experiences do permit us to see some facts and understand them more easily than others.


But in the end, you’re absolutely right. That’s why we have appellate judges that are more than one judge, because each of us, from our life experiences, will more easily see different perspectives argued by parties. But judges do consider all of the arguments of litigants. I have. Most of my opinions, if not all of them, explain to parties why the law requires what it does.


SEN. JEFF SESSIONS: Do you stand by your statement that my experiences affect the facts I choose to see?


JUDGE SONIA SOTOMAYOR: No, sir. I don’t stand by the understanding of that statement that I will ignore other facts or other experiences because I haven’t had them. I do believe that life experiences are important to the process of judging. They help you to understand and listen, but that the law requires a result. And it will command you to the facts that are relevant to the disposition of the case.


SEN. LINDSEY GRAHAM: One thing that stood out about your record is that when you look at the Almanac of the Federal Judiciary, lawyers anonymously rate judges in terms of temperament, and here’s what they said about you: “She’s a terror on the bench.” “She’s temperamental, excitable.” “She seems angry.” “She’s overly aggressive, not very judicial.” “She does not have a very good temperament.” “She abuses lawyers.” “She really lacks judicial temperament.” “She believes in an out-of-control — she behaves in an out-of-control manner.” “She makes inappropriate outbursts.” “She is nasty to lawyers.” “She’ll attack lawyers for making an argument she does not like.” “She can be a bit of a bully.”


When you look at the evaluation of the judges on the Second Circuit, you stand out like a sore thumb, in terms of your temperament. What is your answer to these criticisms?


SEN. LINDSEY GRAHAM: Are you the only one that asks tough questions in oral argument?


JUDGE SONIA SOTOMAYOR: No, no, not at all. I can only explain what I’m doing, which is, when I ask lawyers tough questions, it’s to give them an opportunity to explain their positions, on both sides, and to persuade me that they’re right.


SEN. LINDSEY GRAHAM: But if I may interject, Judge, they find you difficult and challenging, more than your colleagues.


SEN. HERB KOHL: As you know, Judge, the landmark case of Griswold v. Connecticut guarantees that there is a fundamental constitutional right to privacy as it applies to contraception. Do you agree with that? In your opinion, is that settled law?


JUDGE SONIA SOTOMAYOR: That is the precedent of the court, so it is settled law.


JUDGE SONIA SOTOMAYOR: There is a right of privacy. The court has found it in various places in the Constitution, has recognized rights under those various provisions of the Constitution. It’s founded in the Fourth Amendment’s right and prohibition against unreasonable search and seizures.


SEN. HERB KOHL: Alright. Judge, the court’s ruling about the right to privacy in Griswold laid the foundation for Roe v. Wade. In your opinion, is Roe settled law?


JUDGE SONIA SOTOMAYOR: The court’s decision in Planned Parenthood v. Casey reaffirmed the core holding of Roe. That is the precedent of the court and settled in terms of the holding of the court.


SEN. HERB KOHL: Do you agree with Justices Souter, O’Connor and Kennedy in their opinion in Casey, which reaffirmed the core holding in Roe?

JUDGE SONIA SOTOMAYOR: As I said, I — Casey reaffirmed the holding in Roe. That is the Supreme Court’s settled interpretation of what the core holding is and its reaffirmance of it.


This is Democracy Now!, democracynow.org, The War and Peace Report. When we come back from break, we’ll look at the judge’s record. Stay with us. 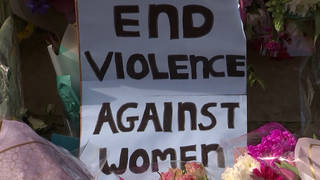 “Disaster Patriarchy”: V (Eve Ensler) on How the Pandemic Has Unleashed a War on Women