Democratic Congressman John Murtha of Pennsylvania has died at the age of seventy-seven from complications after gall bladder surgery. He was the powerful chair of the House Defense Appropriations Subcommittee. In 2002 Murtha voted to support the invasion of Iraq, but three years later he shocked many in Washington when he introduced a bill calling for the immediate withdrawal of US troops. [includes rush transcript]

AMY GOODMAN: As we report on the death of Congress member John Murtha at the age of seventy-seven, we wanted to go back to an interview I did with him in August of 2006. He had come to New York to take part in a town hall meeting on Iraq.


Congressman Murtha had ignited a firestorm in Washington a few months earlier when he called for an immediate withdrawal of US troops from Iraq. Coming from Murtha, this was extremely significant. He was a decorated Army veteran with close ties to the military commanders. He was considered a channeler of the commanders. He was also the top Democrat on the House Appropriations Defense Subcommittee who voted for the Iraq invasion and had visited Iraq several times since the war began.


I asked Congressman Murtha about his position on Iraq and his comments on the Haditha massacre, where US Marines were involved in the killing of twenty-four unarmed Iraqis, including women and children, in 2005. This is my conversation with Congress member John Murtha.


AMY GOODMAN: Can you talk about your position on Iraq? What are you calling for right now, Congressman Murtha?

REP. JOHN MURTHA: I believe we should redeploy responsibly as quickly as possible. I feel very strongly we can’t desert Iraq, but we have to find a way to reduce our presence. We’ve actually become the enemy in some cases. When you look at what’s happened with our troops occupying the country when they said we’d be liberators, some of the military things that we have to do as military and some of the enemies we’ve made, we really lost ground. The incidents are increasing, rather than decreasing. We’ve got 130,000 troops, and we’re spending $8 billion a month, and we need to reduce our presence and let the Iraqis take over.

AMY GOODMAN: Can you talk about Haditha and what happened there? You were the first congressman to talk about it.

REP. JOHN MURTHA: Yeah, I support the military 100 percent, unless they make a tragic mistake like that, which hurts the rest of the troops and hurts our nation.

AMY GOODMAN: And what do you know at this point of what happened there?

REP. JOHN MURTHA: Well, I know that the NCIS, which is the Naval justice system, endorsed what I said. They said that these were — people were killed unnecessarily, and so I’m looking forward to that thing being resolved. It should have been resolved much faster. If I hadn’t spoken out, it wouldn’t even have been investigated.

AMY GOODMAN: And the fact that they’re bringing a libel suit against you, one of the soldiers, Wuterich, saying that you have slandered the soldiers for talking about Haditha?

AMY GOODMAN: Your early call for withdrawal of troops from Iraq, which shocked a lot of people — a conservative Democrat that you are, the Vietnam veteran that you are — one of the leading Democrats is from here, New York, Hillary Rodham Clinton. She did not endorse that call.

REP. JOHN MURTHA: Yeah, I’m disappointed. I’m not sure why that’s happened. She talked to me after I made my statement, and I see she’s finally calling for Secretary Rumsfeld’s resignation. And I think — I don’t know what the reason she’s decided not to endorse my position, but we’re spending $8 billion a month, $11 million an hour, and there’s so many things we could do. We cannot solve these other domestic problems without redeploying. And with 130,000 troops there for three-and-a-half years, the incidents are getting worse.

AMY GOODMAN: What message would you have for the senator from New York right now?

AMY GOODMAN: Congress member John Murtha and war veteran. I spoke to him in 2006 here in New York. He died yesterday at the age of seventy-seven from complications after a gallstone operation. He was operated on at the National Naval Medical Center. They said his intestine was damaged during the gallbladder surgery.

David Price: “The CIA Is Welcoming Itself Back onto American University Campuses”

NEXTDavid Price: “The CIA Is Welcoming Itself Back onto American University Campuses” 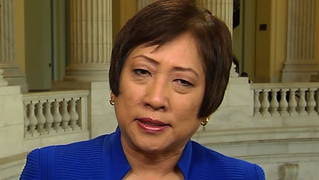