By Amy Goodman with Denis Moyniham

President Barack Obama dedicated the signing of health care legislation to a number of people, including his mother, S. Ann Dunham Soetoro, who, he said, “argued with insurance companies even as she battled cancer in her final days.” The health care legislative process and its frenetic endgame prompted the president to postpone a trip to the country where his mother raised him for several years of his childhood: Indonesia. While his health care bill is considered by many a huge step forward, Obama is simultaneously, and with far less scrutiny, potentially taking a huge step backward with Indonesia.

News is breaking in Indonesia about the role of the Indonesian military in the murder of political activists in the province of Aceh last year, in the lead-up to elections.

This is happening while the White House is engaged in fierce behind-the-scenes negotiations with Congress on whether to restore aid to the Indonesian military, including one of its most notorious elements, the special-forces command known as Kopassus. Military aid to Indonesia was suspended in 1999 after its military, the TNI, unleashed a campaign of terror on the people of East Timor. In 2005, the Bush administration partially restored military aid, but conspicuously denied aid and training to the Kopassus, thanks largely to the efforts of grass-roots activists and the intervention of Sen. Patrick Leahy, D-Vt.

My colleague Allan Nairn, reporting from Indonesia, broke the story this past week on “Democracy Now!,” the news hour I host, and on his blog, allannairn.com. He reported that the TNI “assassinated a series of civilian activists during 2009 … as part of a secret government program, authorized from Jakarta, coordinated in part by an active-duty, U.S.-trained Kopassus special-forces general who has just acknowledged on the record that his TNI men had a role in the killings.” Aceh is a resource-rich province at the western tip of Indonesia. After the devastation Aceh suffered in the tsunami of 2004, the government reached a political settlement with the Free Aceh Movement. The elections in 2009 were a result of that. Nairn details two of the eight assassinations of members of the pro-independence Partai Aceh, citing numerous sources, most of whom, fearing for their safety, remain unnamed.

Allan and I are no strangers to the Indonesian military. In 1991, we survived a massacre in East Timor. East Timor was invaded by Indonesia in 1975, with the full support of President Gerald Ford and Secretary of State Henry Kissinger. In the next quarter-century, the Indonesian military killed more than 200,000 Timorese, a third of the population. Allan and I went there to report on the situation and ended up covering a march to a cemetery in Timor’s capital city, Dili. As the mass of unarmed civilians was hemmed in by the cemetery walls, Indonesian soldiers marched in formation, their U.S.-supplied M-16s at the ready, and without warning, without provocation, opened fire on the crowd. Allan and I were beaten to the ground. Swinging their M-16s like baseball bats, the soldiers fractured Allan’s skull. We survived, but more than 270 Timorese were killed that day. We managed to escape, and to report on the massacre. While I was denied entry in 1999, Allan sneaked in to Timor and reported on the TNI atrocities there, as they burned much of East Timor to the ground. They arrested Allan, but he continued reporting from prison, giving new meaning to “cell phone.”

Since Allan broke the news this past week, the Indonesian press has been buzzing with the allegations. Air Vice Marshal Sagom Tamboen, a spokesman for the TNI, told the Jakarta Globe that the military is considering legal action against Nairn. Nairn told me, “I welcome this threat from TNI, a force which has murdered many hundreds of thousands, and challenge them to arrest me so that we can face off in open court.”
Human Rights Watch recently wrote a letter to Secretary of State Hillary Clinton and Secretary of Defense Robert Gates, outlining serious concerns about possible re-engagement with Kopassus. ETAN, the East Timor and Indonesia Action Network, has launched a petition campaign at etan.org to block the funding.

Much of the political class in the United States is now chattering and twittering about the health care bill’s passage into law, and the potential political consequences. They should spend time focusing on Obama’s plans for Indonesia, and the possibility that he may restore funding and training for one of the world’s most notorious, human-rights-abusing military forces, the Indonesian Kopassus. 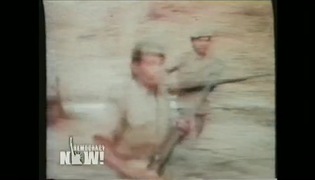