UPDATE 5:00 p.m. EDT: Click here to watch the video from the press conference.

New York, NY; Monday, October 3, 2011 – Today, Amy Goodman, the award-winning journalist and host of Democracy Now! news hour, will announce details of a six-figure settlement in a federal lawsuit brought by her and Democracy Now! producers Sharif Abdel Kouddous and Nicole Salazar against the cities of Minneapolis and St. Paul and the U.S. Secret Service, challenging the policies and conduct of law enforcement during the 2008 Republican National Convention held in Minneapolis-St. Paul, which resulted in the unlawful arrests of Democracy Now! journalists as they were trying to report on public protest and political dissent.

The settlement includes $100,000 in compensation paid by the St. Paul and Minneapolis police departments and the U.S. Secret Service. The settlement also includes an agreement by the St. Paul police department to implement a training program aimed at educating officers regarding the First Amendment rights of the press and public with respect to police operations, including proper procedures for dealing with the press covering demonstrations. The St. Paul Police Department will use its best efforts to get the Minneapolis Police Department to institute a similar program, and will also make the program available to law enforcement personnel statewide.

Announcement of the settlement was made today on Democracy Now! News Hour. Watch/listen

Watch the original Democracy Now! video report on the arrests on Sept. 2, 2008.

2008 Video of the Arrest of Democracy Now! Producer Nicole Salazar

Adobe Flash Player version 9.0.115 or higher is required to watch video inline on this webpage, and JavaScript must be enabled. You can choose another option on the listen/watch page if you prefer.

Click here for a hi-res version, suitable for re-broadast.

2008 Video of the Arrest of Democracy Now! Host Amy Goodman

Adobe Flash Player version 9.0.115 or higher is required to watch video inline on this webpage, and JavaScript must be enabled. You can choose another option on the listen/watch page if you prefer.

Click here for a hi-res version, suitable for re-broadast.

ABOUT CCR:
The Center for Constitutional Rights is dedicated to advancing and protecting the rights guaranteed by the United States Constitution and the Universal Declaration of Human Rights. Founded in 1966 by attorneys who represented civil rights movements in the South, CCR is a non-profit legal and educational organization committed to the creative use of law as a positive force for social change.

ABOUT DEMOCRACY NOW!:
An independent, global, daily public TV/radio/internet news hour, Democracy Now! is hosted by award-winning journalists Amy Goodman and Juan Gonzalez. Democracy Now! is broadcast in English and in Spanish on more than 950 public television and radio stations around the world. For more information, visit www.democracynow.org. 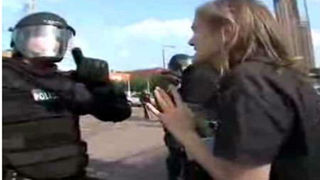