We speak with former freelancer at the New York Times, Natasha Lennard, who helped the newspaper cover the initial Occupy protests. She was arrested during the Brooklyn Bridge demonstration while reporting on the event. She no longer freelances for the Times and recently wrote a piece for Salon.com titled “Why I Quit the Mainstream Media.” [includes rush transcript]

StoryNov 16, 2011As Occupy Enters Third Month, a Look at How Protesters Are Building a Global Movement

AMY GOODMAN: We turn to a reporter who was covering Occupy Wall Street for the New York Times. Juan?

JUAN GONZALEZ: Well, to talk more about the protests, the reporter is Natasha Lennard. She is with us in the studio. She’s a former freelancer at the New York Times who helped the Times cover the initial Occupy protests. She was arrested during the Brooklyn Bridge protest while reporting on the event. She no longer freelances for the Times and recently wrote a piece for Salon.com titled “Why I Quit the Mainstream Media.”

AMY GOODMAN: Well, Natasha, why don’t you tell us what happened? Tell us about your experiences on the Brooklyn Bridge, one of the largest mass protests in U.S. history, more than 700 people arrested. You were swept up, as well?

NATASHA LENNARD: Absolutely. So, I was there that day live reporting for the Times and at the base of the bridge saw a huge surge of hundreds of people at that—at the entrance, taking the bridge, many of whom, I believe, thought they would be permitted because the police did not stop people and indeed seemed to walk along the bridge with protesters on the roadway. I followed the surge of people. That’s where the story was. And about a third of the way in, as many people have heard by now, the police stopped us and then began a, you know, customary mass arrest of 700 people, who now all will probably go to evidentiary trial, having pleaded “not guilty” to any illegal action.

AMY GOODMAN: You showed your credential?

NATASHA LENNARD: I showed my press credential. I had a New York Times identification card, but not an NYPD press card. But as had happened during the eviction a couple of nights ago, press are routinely arrested now in protests, and the credentials, or not credentials, don’t seem to matter. Freedom of the press is very much under threat in these protests, in my view.

JUAN GONZALEZ: But then you became the target of a campaign by Andrew Breitbart and some other notorious now, conservative talk show folks. Could you talk about that?

NATASHA LENNARD: Absolutely. I spoke at a panel at the radical bookstore Blue Stockings in New York’s Lower East Side, talking about strategy and politics of the left with relation to Occupy Wall Street, and at that time was no longer, you know, routinely freelancing for the New York Times. But nonetheless, because of my link to the Times from my arrest, Breitbart found a video—a reporter with Breitbart’s website found a video of my panel discussion in which I quite ardently showed support for the experimental nature of Occupy Wall Street, and they used that to decry me as a non-objective journalist. And as I wrote in Salon this week, I’m not an objective journalist. I, like may hundreds, thousands, millions of people across the country, am quite appalled by the current state of inequality that the system we’re living under has created and would only want to speak in that capacity henceforth.

AMY GOODMAN: After they targeted you, the Times said you would not be writing for them?

NATASHA LENNARD: They released a statement in response to questions from Politico, who followed up the target—not targeting me, but questioning the Times about it. And the Times responded that I would not be used for future Occupy Wall Street coverage, which I believe was somewhat the case anyway, because some of my Twitter feeds had shown subjective support for the movement at large, so it wasn’t exactly a New York Times position.

AMY GOODMAN: You know, so often I do not think it’s about what your position is, since when you watch television with the mainstream journalists, they’re constantly pontificating about what they feel about almost every different issue. It’s what that opinion is. It’s not that you have an opinion.

NATASHA LENNARD: Well, you know, I think there’s a storied history in America’s mainstream press about which opinions become controversial, and you get targeted from expressing them, and which don’t. And I think when it comes to popular movements that question an economic status quo, you know, a target—targets from the right pour in.

AMY GOODMAN: We just saw this tweet by a Guardian reporter, Adam Gabbatt, who said, “I was told 'no press today, for security reasons' when tried to get on Wall St.” Your assessment of this two-month anniversary of the Occupy Wall Street protest that you have been covering throughout, for or not for the New York Times?

NATASHA LENNARD: Well, you know, I think what’s amazing about this is that it’s not one homogeneous, monolithic thing. This is a very diffuse, amorphous spread of people taking action and not feeling representative politics, as they stand, are sufficient, and taking their political spaces into their own hands. And I think the press should take their voices into their own hands, too, and I think it’s a shame that people are being barred from reporting on the scene, as seems to be the case too often.

AMY GOODMAN: And we’re going to talk more about that. We’re going to be joined by a New York City Council member who actually went down to observe on the night that the news came down just after midnight that the police were raiding Occupy Wall Street. He was arrested and held for more than 12 hours without being able to reach any attorney. He was also held for two hours in a police van by himself while others were taken out to be arraigned. We’re going to go to Seattle, as well, speak with a former police chief there, and with an 84-year-old actually former mayoral candidate, who was pepper-sprayed in the face. Stay with us. 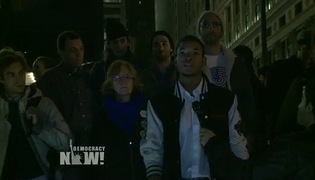 As Occupy Enters Third Month, a Look at How Protesters Are Building a Global Movement