Over the weekend, WikiLeaks founder Julian Assange accepted the award for Most Outstanding Contribution to Journalism at the 2011 Walkley Award in Australia, an honor akin to the Pulitzer Prize in the United States. We play an excerpt from Assange’s acceptance speech and get reaction from constitutional law attorney and Salon.com blogger Glenn Greenwald. Today also marks the first anniversary of “Cablegate,” when WikiLeaks began publishing a trove of more than 250,000 leaked U.S. State Department cables. In related news, the U.S. Army recently scheduled a Dec. 16 pretrial hearing for Army Private Bradley Manning, the soldier accused of providing the cables to WikiLeaks. Manning “faces life in prison, possibly even the death penalty, although the government said they won’t seek that, for what was an act of conscience,” says Greenwald. [includes rush transcript]

AMY GOODMAN: Over the weekend, WikiLeaks founder Julian Assange accepted the award for the Most Outstanding Contribution to Journalism at the 2011 Walkley Awards. The Australian Walkley Awards are the most prestigious awards for excellence in journalism in Australia.

Wikileaks editor-in-chief Julian Assange pre-recorded his acceptance speech, which was played at the award ceremony in Brisbane. This is a clip.

JULIAN ASSANGE: We journalists are at our best when we share with activists and lawyers the goal of exposing illegality and wrongdoing, when we help to hold others to account. This award is a sign of encouragement to our people and other people who labor under difficult conditions in this task.

Our lives have been threatened. Attempts have been made to censor us. Banks have attempted to shut off our financial lifeline. An unprecedented banking blockade has shown us that Visa, MasterCard, PayPal, the Bank of America and Western Union are mere instruments of Washington foreign policy. Censorship has, in this manner, been privatized.

Powerful enemies are testing the waters to see how much they can get away with, seeing how they can abuse the system that they are integrated with to prevent scrutiny. Well, the answer is, they can get away with too much. I expected the hate speech on Fox News, but not the calls by U.S. senators for the extrajudicial assassination of myself and my staff. Neither did I expect that the United States would aggressively undermine its own Constitution to persecute me and my organization. But I can understand the Washington elite’s reaction. Washington is waging a war against the truth. It was, after all, the truth about Washington and their friends that we revealed.

AMY GOODMAN: WikiLeaks founder Julian Assange, accepting the award for Most Outstanding Contribution to Journalism at the 2011 Walkley Awards in Australia.

GLENN GREENWALD: There is no question that the award is justifiable and very well deserved. It is without question true that WikiLeaks is responsible for producing more journalistic scoops over the last 18 months than every single media outlet in the world combined. You can barely read a story about any important region in the world without making reference to what was revealed by those diplomatic cables.

I think the two most significant examples, or two of the most vivid examples, is that even the very hostile WikiLeaks critic, Bill Keller of the New York Times, has credited the release of those cables with sparking the revolt in Tunisia by revealing the extent of the ruling family’s corruption. And of course, that revolt is what ultimately sparked the Arab Spring. There are even good arguments to make that it was because of the cables revealing the extent of American violence in Iraq, killing an entire house of civilians and then bombing the house to cover up the evidence, that it made it impossible for the Iraqi government, the Maliki government, to agree to the Obama administration’s demands to have immunity for U.S. troops as a condition for staying, and therefore helped to bring about the end of the Iraq War. So the significance of the diplomatic cables and other WikiLeaks releases is astronomical. I mean, there’s nothing that compares to it in the last couple of years in terms of shedding light on how the powerful factions of the world function.

And what I think is most striking is, you know, when the Chinese dissident, Liu Xiaobo, won the Nobel Peace Prize in 2010, much was made of the fact that the Chinese government was imprisoning him, that shed light on the true character of the Chinese government. And here you have WikiLeaks, which is, deservedly so, winning the equivalent of the Pulitzer Prize for its—and not just a prize, but the top prize in this—for this foundation, which is Outstanding Contribution to Journalism, winning this award for its outstanding journalism and shedding light on the political and corporate factions and how they function. And what is the United States doing? Using every extralegal and extrajudicial means possible to destroy them, talking about prosecuting them, putting them in prison, cutting off their funding. And I think it shows the true nature of America’s political class in the same way.

AMY GOODMAN: Finally, the Army has scheduled, Glenn, December 16th as the pretrial hearing for Private Bradley Manning, the accused WikiLeaker, the soldier on the ground in Iraq who is accused of providing the—uploading information to WikiLeaks. It’ll be Manning’s first appearance before a court, the first time he will face his accusers, after 17 months of imprisonment.

GLENN GREENWALD: Right. And, of course, if—whoever it was who leaked those cables and the rest of the material to WikiLeaks is the one who really deserves the credit. If Bradley Manning is the leaker, as accused, that’s why so many people, including myself, consider him heroic. But it is amazing that after 16 months, finally, he is going to make his way into a military court. His conditions have, by all accounts, improved ever since the controversy over his extremely harsh and inhumane detention exploded. But there is still the case that the fact that he now faces life in prison, possibly even the death penalty, although the government said they won’t seek that, for what was an act of conscience. And so, we’ll see how this court hearing plays out.

AMY GOODMAN: Glenn Greenwald, I want to thank you for being with us, constitutional law attorney, political, legal blogger for Salon.com, author of the new book, With Liberty and Justice for Some. 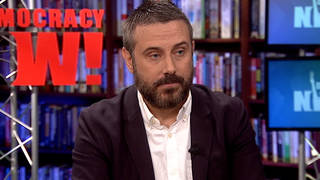