Some 1,000 police officers raided the Occupy Los Angeles encampment in a park outside City Hall overnight, arresting scores of people and evicting what has been the largest Occupy camp in the country. Meanwhile, Occupy Philadelphia protesters vacated their encampment this morning after more than a thousand police moved in and warned them of mass arrests. We get eyewitness updates on both raids from National Lawyers Guild legal observer Ken Montenegro in Los Angleles and Occupy organizer and activist Jeff Rousset in Philadelphia. “[Philadelphia’s history of free speech and democracy] changed this morning at around 1:00 a.m. The city shut down the subways; they barricaded all of city hall, about two blocks in every direction; and hundreds and hundreds and hundreds of cops poured in. They forced everybody off the plaza,” Rousset says. [includes rush transcript]

NERMEEN SHAIKH: Overnight, more than a thousand police raided the Occupy Los Angeles encampment in a park outside City Hall. After a series of dispersal orders, police arrested scores of people as they carried out the eviction of what has been the largest Occupy camp in the country, which began on October 1st. Meanwhile, Occupy Philadelphia protesters vacated their encampment earlier this morning after more than a thousand police moved in and warned them of mass arrests.

For an update, we go to Los Angeles, where we’re joined via Democracy Now! video stream by a National Lawyers Guild legal observer who witnessed the eviction. He was inside the Occupy L.A. encampment when the raid began. And in Philadelphia, we’re joined on the phone by Jeff Rousset. He has been with Occupy Philadelphia since its inception. He was there today during the raid of the Occupy camp. He’s also the national organizer for the Prometheus Radio Project.

AMY GOODMAN: Ken Montenegro is the legal observer in Los Angeles. Tell us what happened there, as it’s taking place, even as we broadcast, Ken.

KEN MONTENEGRO: So, this morning—and thank you, Amy, for providing coverage to this, which is something that probably won’t get the coverage it deserves from this angle.

Consistent with the other evictions or ejectments of the other Occupy locations, it was almost like blitzkrieg. It was a sudden, rapid deployment of troops, or really, police officers on foot in military riot-style gear, come into the park, cordon off sections of the park—well, actually, it’s a City Hall lawn—we’re contending in a lawsuit that it is not a park, so the City Hall lawn—and started to force people out, would threaten people with arrest, move the public out of the line of sight, allowed embedded—effectively embedded or authorized, I think is the term they’re using locally, teams from some media outlets into the park to film or document, if you will, what happened. But it was heavy-handed. It’s my understanding that there were more than 1,400 LAPD, Los Angeles Police Department, officers deployed for the eviction of Occupy L.A.. That doesn’t factor in the number of sheriffs’ deputies. The buses that were used were Sherriff’s Department buses, and the type of equipment that was used was really just kind of off a military-like lot or something. It was just very, very heavy-duty.

AMY GOODMAN: In Philadelphia, Jeff Rousset, with Occupy Philadelphia, national organizer for the Prometheus Radio Project, what happened there overnight?

So, on Friday, the city ordered us to leave Dilworth Plaza, to leave City Hall, by 5:00 p.m. Sunday. At that time, there were about a thousand people supporting us, including some folks from Occupy Wall Street. Since then, the number has dwindled, but we’ve maintained a presence at City Hall. You know, Occupy Philly, over the last two months, has been quite different from other Occupy movements, in that the Philadelphia police has been very hands-off. There has not been any police brutality. And, you know, those of us here thought that that was because the city was really being careful of its public relations image, being that Philadelphia is unique in that it’s the so-called birthplace of free speech and democracy.

However, all that changed this morning. At around 1:00 a.m., the city shut down the subways. They barricaded all of City Hall about two blocks in every direction, and hundreds and hundreds and hundreds of cops poured in. They forced everybody off the plaza. Some folks decided to stand and link arms in the street, while another group went out on a march and kind of marched around the city. Eventually, the police gave orders to disperse and told everybody to get on the sidewalk or else they would be arrested. A handful of folks stayed in the street, linking arms, doing—in an act of civil disobedience. They were arrested.

After the rest of us, about 40 people, moved onto the sidewalk, out of nowhere, about five cops on horseback, on these huge horses, came in out of nowhere, and one of the cops on horseback charged into the crowd that was on the sidewalk, trampled one person, actually my co-worker, Vanessa, who is now in the hospital, possibly with some broken toes. She was saved by three men who were able to grab her by both arms and pull her out from underneath these horses. Other people were hit by horses, as well. Shortly after that, people remained on the sidewalk. We had other protesters arriving who managed to get past the barricades, and they told us that other protesters had been choked. At least two people had been choked in another location. A cop pulled a knife on someone walking up the sidewalk.

JEFF ROUSSET: After—a knife. A knife. That’s right. After some more standing around, just totally outnumbered by cops, the other march was on Broad Street, and we got word that there was confrontations going down, so we hurried over there and continued to march up Broad Street while cops attempted to trap us and pen us in using their bikes as barricades, and also using bikes as weapons to hit people. I have an open case from getting arrested at Comcast a few weeks ago, so I was trying to maintain a safe distance and just film, yet this white-shirt police officer actually grabbed me and told me I couldn’t go across the street and shoved me back into the crowd in this attempt to trap protesters. The police were slamming people on the ground, attacking people, apparently arbitrarily. A woman called a female police officer a name, and the cop just punched her right in the face. Eventually the march continued into a narrow street, and cops totally surrounded and trapped people. Again, they attacked people. They let—

AMY GOODMAN: How many were arrests were there, Jeff?

JEFF ROUSSET: They let some go, and they ultimately arrested about 50 people in that one spot.

AMY GOODMAN: And the Occupy encampment is gone now, at Occupy Philadelphia, in front of the City Hall?

JEFF ROUSSET: Yeah, after they forced everyone off the plaza, the cops tore down the tents, tore down the shelters. And, you know, you couldn’t really see much besides police and kind of stuff, debris, flying in the air.

AMY GOODMAN: Well, Jeff Rousset and Ken Montenegro, I want to thank you both for being with us. Jeff Rousset from Occupy Philadelphia. Ken Montenegro, legal observer with the National Lawyers Guild, during this morning’s eviction of Occupy Los Angeles, graduate of People’s College of Law. 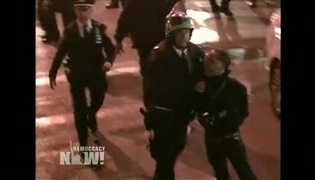