In an exclusive interview, we speak with former Greek prime minister, George Papandreou, who is attending the U.N. climate change summit in Durban, South Africa. Papandreou was forced to resign last month when he suggested holding a national referendum to allow the Greek people to have a say in whether they would accept the European Union’s bailout plan which would necessitate severe austerity cuts. We speak to Papandreou about the financial crisis, the role of banks, and the importance of the growing Occupy Wall Street movement. “The Occupy Wall Street movements … are saying something very, very specific, that inequality, in the end, is an inequality of power, and we need to redistribute power, not just money—power—and this is, I think, the democratic challenge that we have today,” Papandreou says. [includes rush transcript]

AMY GOODMAN: We turn right now to our exclusive interview with the former prime minister of Greece, George Papandreou. He was here at the U.N. conference just about an hour ago, and I talked to him about the Occupy Wall Street movement, why he’s at the climate change conference, and the fact that he’s here not as prime minister of Greece but representing Socialist International, or SI.

AMY GOODMAN: Can you talk about the status of democracy now in Greece, the cradle of democracy?

For example, in Greece, we have a lot of tax evasion, and tax havens around the world, of course, help this. But this is robbing our people of the capacity to deal with the debt burden, but also with growth. And I think this is creating a deep inequality. The Occupy Wall Street movements or Occupy democracy movements in the United States are saying something very, very specific, that inequality, in the end, is an inequality of power, and we need to redistribute power, not just money—power—and this is, I think, the democratic challenge we have today, because once we—when we have—when that’s lost, then our democratic institutions are actually—can be captive to special interests and very strong interests. And I think this is something which we’ve seen in the financial markets, but also in our societies.

AMY GOODMAN: Do you support the Occupy Wall Street movement?

GEORGE PAPANDREOU: I support much of what they’re saying, because there are obviously different views. But I think the central idea, that we need to not only redistribute income, but we also need to redistribute power in our society, is absolutely necessary to rejuvenate our democracies. And I see that this is a global challenge. It’s a challenge in Greece. I think one of the reasons I, myself, had asked to propose to go to a referendum was to give ownership to the Greek people about the future of our country and say to the markets and to the European Union, to the rest of the European Union, yes, we will do what’s necessary, but we want to make this our own decision. And—

AMY GOODMAN: And so, what happened?

GEORGE PAPANDREOU: Well, what happened was we did create in the end—we had a lot of—a reaction from other parties, which in the end came together to work together in a coalition government, which was another alternative. But I do believe that we need to think in Europe how we mobilize our citizens to be more—to have more of a say in European Union issues, because now, more and more, what’s happening in our global societies, but in Europe also, is that, because of these crises, rather than making our citizens or giving our citizens the opportunity to be innovative, to participate, to have a voice, we are closing in into sort of closed-roomed decisions, you know, of the few and the powerful, under the rubric that, yes, this is a crisis management. OK, I understand that. But we need to deal with these crises, whether they’re climate change, whether it’s poverty, whether it’s migration, whether it’s our multicultural societies, whether it’s the financial crisis. We need to give our citizens—have them to be active, not just to have a voice, but they have many solutions, whether it’s crowd sourcing or social media, or whatever. Our citizens can have solutions.

AMY GOODMAN: Do you think that the referendum should have taken place?

GEORGE PAPANDREOU: I think, sooner or later in Greece, we will be needing more participation of our citizens on the—where Europe is going. And my first choice would have been the referendum, yes.

AMY GOODMAN: Greece is now being run by an unelected technocrat.

GEORGE PAPANDREOU: Well, that’s not exact—exactly so. In Greece, we have a parliamentary democracy, therefore the parliament will decide—decides to give a confidence vote to whatever prime minister is appointed and then decided upon. And what we did is we have a coalition now of three parties and decided that in order to have this coalition, we needed to have somebody who is, if you like, above party politics. And that’s why we have Lucas Papademos.

AMY GOODMAN: What role did Goldman Sachs play in what’s happening in Greece today in the economic crisis?

GEORGE PAPANDREOU: Well, obviously, a number of firms, such as Goldman Sachs, have played a crucial role in the financial crisis around the world. We are still in the process of investigating the role of Goldman Sachs. In Greece, there has been a parliamentary committee set up, and we will have the results hopefully soon.

AMY GOODMAN: How did Goldman Sachs benefit by giving additional credits to Greece?

GEORGE PAPANDREOU: Yeah, this was—these were practices that in the past were considered legitimate practices, not only for Greece, but for many other countries. But in the end, these were—these innovations were the—what brought down not only Lehman Brothers but the whole financial situation just a few years ago, unluckily to the detriment of the man or woman in the street. But we haven’t really seen the banking system being revamped. And this, I think, is a key issue. We need real regulation around the world to deal with the issues such as naked CDSs, tax havens, transparency in the banking system, more democratic decision making. This is absolutely necessary if we want to have a sustainable economy.

AMY GOODMAN: Is Greece being ruled right now more by American financial institutions than the people of Greece?

GEORGE PAPANDREOU: I wouldn’t say Greece is being ruled by American financial institutions. I would say that Greece is obviously dependent. Obviously, we have our share of responsibility as Greece, too, particularly the previous government, in borrowing more than we could pay back and not investing it in areas which would be productive. I’d be very much in favor of borrowing and investing in green growth, for example, which would make us competitive, because I do believe Europe can become competitive vis-à-vis other countries, not through inequality, not simply through cutting our wages and prices, but through investing in quality, investing in green growth and so on. So I think we are—yes, we are dependent right now on these loans, and on very strict conditions, but we’re working to go beyond this and make Greece a robust economy, a viable economy. We have great potential. Our people have great potential. They’re suffering right now. We’re all suffering. But we have great potential.

AMY GOODMAN: Prime Minister Papandreou, what are your plans?

GEORGE PAPANDREOU: Well, my plans—well, right now I’m fighting for, as head of the SI and here in Durban, seeing that green growth is the solution, even to our financial crisis. As long as we can get our heads together in the governments to work and invest in green growth, to bring back jobs, to bring back—to move our economies into a different type of model of growth, which is less consumer-oriented but much more humane and much more—and much healthier, if you like, but at the same time making sure that our planet is sustainable. So this is major for me, and I’ll be voicing this, not only this, but other issues around democracy and social justice in Europe and the world.

AMY GOODMAN: Do you think the financial institutions have anything to do with sustainability?

GEORGE PAPANDREOU: Well, I’d like to see the financial institutions change. I think there has been some change, but very slow, and not enough in order to really deal with the problems. We have, I think, a very deep understanding around the world about the types of problems. But we have the institutions and the global governance which, at this point, is not living up to the conditions. G-20 sometimes—G-20 is sometimes called G-zero, because there’s no real global governance. And I think this is where we’re lacking right now.

AMY GOODMAN: What is your greatest regret?

GEORGE PAPANDREOU: My regret—well, I wouldn’t say regret. I think what—when I took the office as prime minister two years ago, my goal and the mandate we had was to change Greece. I ended up having to crisis manage Greece for the last—in the previous two years. However, we have also made major changes in Greece to make it more just, more transparent, more investment-friendly and more of a green economy, and I believe over the next few years we will see this. So, I wish we didn’t have this crisis, we would just go to these changes, because if we had made these changes, Greece wouldn’t have been in this debt crisis. However, I also feel that—proud to have been able to save Greece from bankruptcy, and even with great cost to the Greek people.

AMY GOODMAN: Finally, the outcome of COP 17—are you satisfied with this and the role of the United States, in particular, that so many have been saying here is acting as an obstacle to any kind of serious greenhouse gas reduction legal framework?

AMY GOODMAN: Do you agree it is a chief obstacle or not?

GEORGE PAPANDREOU: Yes. Yes, it could have taken the lead. Thank you.

AMY GOODMAN: Former Greek prime minister, George Papandreou, now president of the Socialist International, or SI. And that does it for our broadcast. You can go to our website at democracynow.org to see our full coverage of the week that we have been in Durban, South Africa, covering the COP 17, the U.N. climate change talks. You can also go there to see our full coverage of Copenhagen, when we were in covering the COP 15, and the COP 16, as well, in Cancún, also the People’s Summit on Climate and Mother Earth in Bolivia. That’s all at democracynow.org. 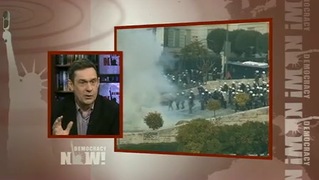