Talks at the U.N. Climate Change Conference in Durban have entered their last official day, with focus now on a European Union-sponsored road map calling for a new climate treaty to be negotiated by 2015. The treaty would impose binding cuts on the world’s biggest emitters of the heat-trapping gases, but would not likely go into effect until 2020. After being publicly heckled by a U.S. college student on Thursday and facing widespread accusations of obstructing the Durban talks, U.S. climate envoy Todd Stern said the Obama administration supports the E.U. road map. The U.S. State Department later backtracked on Stern’s comments by taking the unusual step of issuing a clarification to its position, saying it does not yet support a legally binding deal to cut emissions. When Amy Goodman then tried to question Stern and fellow lead U.S. negotiator Jonathan Pershing about the apparent retraction, they refused to answer. [includes rush transcript]

StoryApr 24, 2017“See You in Court”: Kids Suing Trump Admin over Climate Change Speak Out at March for Science

AMY GOODMAN: We’re broadcasting from Durban, South Africa, in our week-long exclusive at the United Nations Climate Change Conference. Talks have entered what is supposed to be their last official day, but without an agreement, negotiations are expected to possibly extend into Saturday.

The talks are now focused on a European Union-sponsored road map that calls for a new climate treaty to be negotiated by 2015 to impose binding cuts on the world’s biggest emitters of greenhouse gases. Such a deal would not likely go into effect until 2020. The E.U. plan has received support from key blocs at the talks, including a coalition of small island nations and a grouping of the world’s least developed countries. But several of the world’s largest polluters, including the United States, China and India, have refused to back the deal. There’s also no agreement on how to establish a Green Climate Fund and whether it should be run in part by the World Bank. Last night, the U.S. State Department took the unusual step of issuing a clarification to its position on the so-called E.U. road map to make clear that the United States does not yet support a legally binding deal to cut emissions.

Earlier today, Connie Hedegaard, the European commissioner for climate action, held a news conference and answered questions about the E.U. deal and the opposition to it from the world’s largest polluters.

PETER FABRICIUS: Peter Fabricius from Independent Newspapers. Yesterday, the chief U.S. negotiator, Todd Stern, in his press briefing first said that he supported the road map, and then later, last night, the State Department issued a statement clarifying that to say he did not mean legally binding, he meant other aspects of the E.U. Could you just give us some sense of where you think the U.S. stands, and also who the other holdouts are that haven’t come aboard?

CONNIE HEDEGAARD: As I indicated, I think it’s very interesting that half of the BASIC group has now said that they are in favor of—only of a legally binding deal. But the key point there is whether that also goes for their own commitments—South Africa and Brazil. And I think that I’ve also indicated where two other major challenges are. And yes, I also saw this correction from the State Department. I always thought that the United States were in favor of a legally binding deal, provided that others were also legally bound. So, in that sense, we—and you wrote, all of you, very much about the Chinese press conference, when they were also sort of articulating things in that direction, that the world should have a legally binding deal. I think also press releases were issued. But again, the discussion is, should it also go for themselves. And that is sort of the old scheme we are still in. That’s the same practice we are still waiting for. We sat as a set in small group of 28 ministers appointed by the respective regional groups, a very representative group, until 4:00 or a bit more this morning and tried to find solutions to that, and that process will continue here. I’m not quite sure when the presidency will call the meeting again.

AMY GOODMAN: Connie Hedegaard, the European commissioner for climate action. Minutes after Hedegaard spoke, I spotted the top two U.S. climate negotiators, Todd Stern and Jonathan Pershing, and attempted to speak to them.

AMY GOODMAN: Could we get State Department clarification on the road map?

TODD STERN: No, not right now.

AMY GOODMAN: What we’re trying to do is ask the chief U.N.—U.S. climate negotiator, Todd Stern, about his statement yesterday that the U.S. supports the E.U. road map, the European Union road map, because after he said that last night, the State Department issued a clarification point saying the U.S. may support the E.U. road map, but not the legal aspects of it, which is the only meaningful aspects of it. 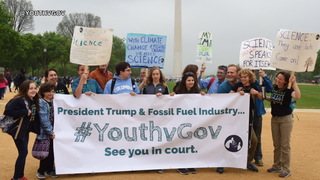