In Egypt, the trial of former president Hosni Mubarak has been adjourned until August 15. On Wednesday, Mubarak appeared in court for the first time, along with his two sons, Gamal and Alaa. He was brought into the Cairo courtroom on a hospital stretcher. Mubarak denied all the charges against him, which include profiteering, illegal business dealing involving Israeli gas exports, and the unlawful killing of protesters during the revolution. Democracy Now! correspondent Sharif Abdel Kouddous was outside the courtroom, where crowds had gathered to watch, many expressing relief that justice could be served for the victims of the revolution. Special thanks to videographer Nicole Salazar. [includes rush transcript]

AMY GOODMAN: In Egypt, the trial of former president Hosni Mubarak has been adjourned until August 15th. On Wednesday, Mubarak appeared in court for the first time, along with his two sons, Gamal and Alaa. He was brought into the courtroom on a hospital stretcher. Mubarak denied all the charges against him, which include profiteering, illegal business dealing involving Israeli gas exports, and the unlawful killing of protesters during the revolution.

Democracy Now! correspondent Sharif Abdel Kouddous was outside the courtroom where crowds had gathered to watch. He filed this report.

SHARIF ABDEL KOUDDOUS: Mubarak has just appeared on the screen for the first time. He’s lying down on a bed. The crowd erupts in joy.

August 3rd is a day many Egyptians will never forget. It’s the day their former president, Hosni Mubarak, first stood trial for his crimes, just six months after a popular revolution forced him out of office. The trial was held at the Police Academy, a vast, walled complex on the desert outskirts of Cairo. The courtroom was the very conference hall where Mubarak had addressed security leaders two days before the January 25th revolution began.

No less than 8,000 police, army and security forces were deployed to guard the area. Six hundred people would allowed to attend the proceedings inside, including lawyers, human rights workers and family members of those killed in the uprising. Dozens of local and foreign journalists crowded at the entrance, trying to get in. Outside the walls of the compound, hundreds of revolutionaries had gathered to watch the trial on a massive outdoor screen. A crowd of Mubarak supporters had gathered, as well, chanting praises to the deposed president and denouncing media figures who hadn’t stood by the regime.

Tensions quickly rose, and clashes broke out. Angry crowds hurled rocks and bottles at each other. The police, out in full force, stood by and watched, before finally intervening and restoring calm. The pro-Mubarak crowd eventually left the scene.

Khaled Alaa had come with his daughter and was among those who was proud to see the former president on trial.

KHALED ALAA: [translated] I came today to be present at the trial of the deposed president. I came to see the contrast between someone who was an oppressor, who we are now applying justice to. This is certainly a historic day in Egypt. And I told my daughter to come with me, because this might not happen again in our lifetimes.

SHARIF ABDEL KOUDDOUS: Since his ouster on February 11th, Mubarak had remained in the resort town of Sharm el-Sheikh, hospitalized since April. While the public prosecutor had officially requested the former president be flown to Cairo for the trial, many Egyptians remained skeptical. But just after 9:00 a.m., the crowd erupted in cheers.

Just moments ago, a helicopter passed over our head, presumably the one carrying Hosni Mubarak. The crowd behind me went wild, chanting, “There’s the thief! There’s the thief!” They’re chanting for a retribution that they’ve been waiting for for so many years.

Those gathered outside the Police Academy had come from across Egypt to be at the site of the trial. And some had even come from outside the country.

MOHAMED EL NAKIB: My name is Mohamed El Nakib. I’m originally Egyptian, but I live in America, United States, in the state New Jersey. Well, I came to visit my family in Cairo, but also I came to see this. It’s very important. It’s really important to everyone here. We just want to see what would happen with him. I didn’t expect him to show up whatsoever, and it seems like he’s going to show up. So we want to see what’s going to happen next.

SHARIF ABDEL KOUDDOUS: The anticipation grew as people watched the state TV broadcast on a large outdoor screen. The crowd got louder as the defendants cage in the courtroom began filling up. Former Interior Minister Habib El-Adly appeared, as did both of Mubarak’s sons, Gamal and Alaa, dressed in the white coveralls of the accused. Then, the crowd caught its first glimpse of Hosni Mubarak himself.

There’s Mubarak. Mubarak has just appeared on the screen for the first time. He’s lying down on a bed. The crowd erupts in joy. This is Mubarak’s first appearance on television since he was ousted over six months ago. This is a historic moment in Egypt, a historic moment in world history.

As the trial got underway, the crowd fell quiet. Revolutionaries who had protested in Tahrir and members of the security forces that had done battle with them during the uprising stood side by side watching the screen in awe. The sight of Mubarak and his two sons standing in the defendants cage as the charges of corruption and involvement in the killing of protesters were read out to them was striking.

Sherif Azer, the assistant secretary general at the Egyptian Organization for Human Rights, described the significance of the moment.

SHERIF AZER: This is a historical moment, something that we never imagined that would come, even the least one that will be tried, not to mention Mubarak and his sons, like even the generals of the police. No one ever imagined that they would be put on trial ever. As we have seen, he was physically there, and he appeared in front of cameras. So far, it seems that it’s going on the right track.

SHARIF ABDEL KOUDDOUS: But perhaps none were more moved than the family members of those killed in the uprising. Mourning mothers and wives, dressed in black and clutching pictures of their loved ones, described how much the moment meant to them.

UM HASSAN ALI MOHAMED: [translated] I am the wife of the martyr Yehia Eid Mohamed Abdel Amm. My name is Um Hassan Ali Mohamed. On January 28th, he was returning from work, when in front the El-Marg police station, as he was riding his motorcycle, the police shot him twice in his chest. When he turned around, the police shot him twice in the back. When my husband died, I thought, “How will I ever get justice for him? How will it ever come?” because the president authorized the protesters to be shot. Now, I can’t tell how much joy I’m feeling. I’m happy. I’m so happy, I don’t even believe it. My heart is jumping from joy from what I’m seeing. I came not believing he would be in the cage. I came thinking they would trick us. I came thinking he had already fled. I can’t believe he’s here. I can’t believe it.

MOTHER OF MOHAMED SULEIMAN TAWFIQ: [translated] I am the mother of the martyr Mohamed Suleiman Tawfiq. He was hit by a live ammunition—three bullets, one in his head and two in his stomach—on his birthday, on the day of the Friday of Anger. I felt such relief when I saw him in the cage with my bare eyes, and I saw that it was a public trial. I used to go home broken and go home bothered. But now I can go home and sleep. I’ve spent seven months without sleeping. But now I can sleep as I am comfortable knowing this. I feel that I got justice.

SHARIF ABDEL KOUDDOUS: Today is just the opening day of this trial. There are still many more to come. And people here will await the verdict. They will wait to see whether justice will be done. Regardless of what happens, today was a defining moment in Egypt’s revolution.

AMY GOODMAN: Sharif and Nicole’s coverage from Egypt was made possible in part by a grant from the Pulitzer Center on Crisis Reporting. 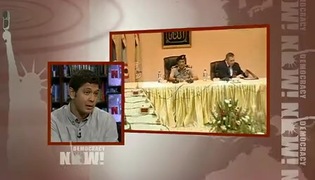