We speak with Buddy Roemer, a candidate who is on the Republican ballot in New Hampshire but has not been invited to this weekend’s two Republican debates—or any of the past 16 debates—even though he is a former governor of Louisiana and four-term member of Congress. Roemer’s campaign is unusual in the Republican field: He has refused to accept campaign contributions more than $100, rejected all donations from political action committees, and has made campaign finance the key plank in his platform. He has also endorsed the Occupy Wall Street movement. “[President Obama] gets elected, and he says he wants change. But he takes all his money from these same corporations who don’t want change,” Roemer says. “Special interests control Washington. I’ve been there.” [includes rush transcript]

StoryJan 06, 2012Occupy New Hampshire Member on His Exchange with Mitt Romney over Support for Corporate Personhood

JUAN GONZALEZ: The leading Republican candidates are participating in two debates this weekend in New Hampshire ahead of Tuesday’s primary. The first is sponsored by ABC and will be on Saturday night at St. Anselm College in Manchester, New Hampshire. Then on Sunday morning, the candidates will debate on NBC’s Meet the Press.

Our next guest is on the Republican ballot in New Hampshire but has not been invited to these or any of the other 16 Republican debates, even though he is a former governor and four-term member of Congress.

AMY GOODMAN: His name is Buddy Roemer. He served as Louisiana’s governor from 1988 to 1992. Prior to that, he served four terms in Congress. Roemer has run an unorthodox campaign: he’s refused to accept campaign contributions over $100, has rejected all donations from political action committees, and has made campaign finance the key plank in his platform. He even endorsed the Occupy Wall Street movement.

BUDDY ROEMER: Do you know who the largest corporate giver is to politicians in Washington? Goldman friggin’ Sachs.

NARRATOR: …they don’t want you to hear.

NARRATOR: He’s been a congressman and a governor…

DYLAN RATIGAN: They don’t seem to want you in the conversation.

NARRATOR: …who hasn’t been invited to a single televised debate.

BUDDY ROEMER: I’m Buddy Roemer, and I approve this message.

BUDDY ROEMER: The country is in a modest recovery now. Earlier this year, we had the same jobs report that things were recovering, and it slid right back down. I think the nation is in decline, long term. We’ve lost a million-and-a-half jobs net in this country compared to when Bill Clinton was president. Long term, we have unsustainable trade imbalances. Long term, we have a debt we can’t repay. Long term, we’ve lost three out of four manufacturing jobs because of unfair trade treaties. I think this nation is in trouble. The corporations have made more money in the last 18 months than any time in the history of America.

So what’s the disconnect? A president gets elected, and he says he wants change. But he takes all his money from these same corporations who don’t want change. Special interests control Washington. I’ve been there. I’m the only person running that spent eight years as a congressman and spent four years as governor of a state, turning unemployment around.

It’s the way I always run for office. And I usually win, if I can get my message to the people. I’ve been shut out of the debates. My message has not reached the people. We can do better, America. Kick the lobbyist out of the room.

JUAN GONZALEZ: And, well, Governor Roemer, why do you think your message has not been allowed to get out by the various media companies who have controlled these debates?

BUDDY ROEMER: Well, I think you just answered it. There’s a different criterion or a different criterion at every debate. We call and ask. First, you had to be an official candidate for president. I thought that was fair. I announced at Dartmouth College in New Hampshire in August. We called for the next debate. They said, “Well, you have to have 1 percent in a national poll.” We worked four weeks. We made 1 percent. I called again. They said, “Oh, you have to have 2 percent now, Governor.” We made 2 percent. I called again three debates ago, and they said, “Well, you had to raise a half-a-million dollars in the last 90 days.” We had raised $256,000. No check over $100. Average gift: $51. All 50 states participating, from California to Maine. And they said, “Well, you need to raise half-a-million.”

Is that the standard to elect our president? Is that what we’re doing in America now? Look, I’m not perfect in anything, and I don’t know everything. But I have been a congressman. I have been a governor. I have built a billion-dollar bank, with no bailout money, profitable. I have built jobs. I know what to do. And I can’t even get in the debate. It is amazing to me.

AMY GOODMAN: Buddy Roemer, you were a Democrat. Then you switched to the Republican Party. Why?

By the way, I helped form a group of Democrats called the Boll Weevils in Congress. We worked with President Reagan for eight years. I was proud of that.

Number two: Louisiana was a one-party state. When I looked at my state legislature, there were 144 members. A hundred and thirty-six of them were Democrats. There was no debate. There was no choice. There was no competition. So I thought that one of the lasting things I could do would be to change parties, because it fit my belief better, although I like some things the Democrats stand for, and, number two, give the state a two-party system, which will make it a better state. It’s worked just like that. Now Republicans are about 55 to 60 percent of the legislature. There’s clear debate. There’s clear dialogue. A one-party nation, a one-party state, is corrupt, and I wanted to change that.

JUAN GONZALEZ: And Governor Roemer, you’re probably also one of the few Republican politicians who has been supportive of the Occupy Wall Street movement.

JUAN GONZALEZ: Could you talk about that and why you see a positive role for the Occupy movement in American politics?

Look, Washington is run for the money. And wherever the money is—ethanol subsidies, subsidies to huge oil companies, loopholes where General Electric can build a plant in China, sell the product back in America, and deduct the expense in China, while they close down American plants. It’s not right. It’s not healthy. It’s not fair.

I’m a capitalist. I mean, I went to Harvard and studied economics. I got my master’s degree from the Harvard Business School in banking and finance. I build companies. I’ve built a nice, profitable bank. I believe in capitalism. But I also believe in fair play. I believe in a speed limit on the highway. And I think America is bought and sold by the big companies and the special interests.

Hell, I went to Iowa in February, gave one speech. And I said, I’ve come to Iowa to lose the election. The first thing I’ll do as president is cut the ethanol subsidies. It goes to three large corporations. It doesn’t help anybody in America. It’s been there 27 years. We need to spend within our means. And I’ll ask everybody to give something—the oil companies and the ethanol growers. That’s the kind of guy I am. I’m an American first, not a Republican. I’m an American first. And we need to get this country right again.

AMY GOODMAN: And yet, you are not in. There’s two major debates that are taking place this weekend.

BUDDY ROEMER: Yeah. I don’t understand it. I mean, look, I’m not pretending to be something I’m not. I’m not well-financed. I mean, I’m proud of my volunteers. I’m going to—let me say it again. I’m proud of them. We covered New Hampshire. But we are forgotten. In the 21st century, if you’re not in the debates, you’re not a candidate. You should go with me sometime into a room full of 30 or 40 people to hear a presidential candidate. And they like what I say, and they join hands with me. But the first question they ask me is, “I didn’t know you were running, Buddy. I’ve never seen you in a debate.”

JUAN GONZALEZ: Well, Governor, I wanted to ask you—one of the big issues, obviously, in recent months in the debate over wealth inequality has been the Republican Party attacks in various states on the rights of labor unions and union members to organize. What’s your view on the rights of workers to form unions and to have collective bargaining with their employers?

BUDDY ROEMER: I think all employees have the right to join a union. We are a right-to-work state in Louisiana. I worked hard for that, so that they could not be abused. And there was some abuse in the system. That can be debated. But Louisiana decided to make it easier for an employee to say no. But an employee has a right to say yes.

AMY GOODMAN: Governor Buddy Roemer, this weekend, when the debates take place, how can people find out your responses to the questions, since you’re not included in either? Are you going to be doing what you did in Iowa?

BUDDY ROEMER: Oh, you know my trick, don’t you? Yeah, we tweet during every debate. I mean, we answer the questions as they’re asked. I mean, I know when Rick Perry had his unfortunate mistake and forgot the answer to his own question, we tweeted the answer: you know, Commerce, Education. You need to—

BUDDY ROEMER: BuddyRoemer.com. BuddyRoemer.com is the way to plug into all my social media. It’s a big thing with what we do. We pride ourselves on leading the vanguard. And “Roemer” is spelled—

AMY GOODMAN: We only have five seconds. Have the thought of going to the debate anyway, actually physically showing up?

AMY GOODMAN: I want to leave it there. We thank you so much for, Buddy Governor—for, Governor Buddy Roemer, joining us, Republican presidential candidate, speaking to us from New Hampshire. 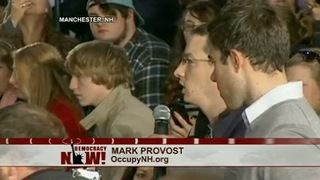