Occupy New Hampshire activist Mark Provost made national headlines Wednesday when he attended a town-hall meeting hosted by Republican presidential candidate Mitt Romney and asked about his past comment that “corporations are people.” Provost’s question to Romney came as Occupy New Hampshire is preparing for a series of events leading up to the state’s Republican primary to highlight the disproportionate impact corporations and wealthy donors have on the political process. We play an excerpt of the town-hall exchange and get Provost’s response to Romney reply. “I think his response really, again, is this denial that there’s this class in the country and that there are some people within the corporation, specifically the workers, that are taking it on the chin so that the United States’ executive management can make massive bonuses, and serve their shareholders rather well, too, because the profits largely go to capital gains and dividends.” [includes rush transcript]

JUAN GONZALEZ: Protesters aligned with Occupy New Hampshire are planning a series of events leading up to Tuesday’s Republican primary. On Wednesday, one member of the group made national headlines when he questioned Mitt Romney about his past remark that “corporations are people.” Before we play Wednesday’s exchange, I want to go back to last August, when Romney first made the comment at the Iowa State Fair.

MITT ROMNEY: For the coming decades going to be able to balance our budget and not spend more than we take in, we have to make sure that the promises we make in Social Security, Medicaid and Medicare are promises we can keep. And there are various ways of doing that. One is we could raise taxes on people.

MITT ROMNEY: Corporations are people, my friend. We can raise taxes on—

HECKLER: No, they’re not!

MITT ROMNEY: Of course they are. Everything corporations earn ultimately goes to people. So, where do you think it goes?

HECKLER: In their pocket.

JUAN GONZALEZ: On Wednesday, Mitt Romney was questioned about corporate personhood by Mark Provost, a member of Occupy New Hampshire and Occupy Boston. It was the first question asked at the town-hall meeting where Senator John McCain endorsed Romney.

MITT ROMNEY: OK, we’re going to take some questions from you. Just raise a hand, shout out a question. Yes, sir?

MARK PROVOST: How are you doing, Mr. Romney?

MARK PROVOST: I am Mark from Occupy Boston, and I’m from Occupy New Hampshire. Congratulations on your victory last night. And you’ve said that corporations are people. But in the last two years, corporate profits have surged to record highs, directly at the expense of wages. That’s in a JPMorgan report. Now, it seems that the U.S., it’s a great place to be a corporation then, but increasingly a desperate place to live and work. So would you refine your earlier statement from “corporations are people” to “corporations are abusive people”? And would you be willing to reverse the policies of both the Obama administration and his predecessors around corporate-centric economic policies that only see wealth and income, you know, just go to the top, at record highs seemingly, every—faster every year? And the people in this country are in a permanent economic stagnation. So, I just want to see some color on that.

MITT ROMNEY: Where do you think corporations’ profit goes? When you hear that a corporation has profit, where does it go?

MITT ROMNEY: Yeah, but where does it go?

MARK PROVOST: Well, it depends. If they retain it, there’s retained earnings, that means that they’re not spending it on—they’re not distributing it as dividends, and that means they’re not using it for capex, capital expenditure. You know, so they could just hoard it. That’s retained earnings. Right? But as profits, it goes to shareholders. So it goes to the 1 percent of Americans that own 90 percent of the stocks.

MITT ROMNEY: OK, not let’s get to facts, all right? There are two places they can go.

Number two, you are right, they can go into retained earnings, which then can be used for capital expenditures or growing the business or hiring people or working capital. When a business has profit, it can do good things: give it to the shareholders and grow the enterprise. And by the way, the only way it can hire people is if it grows the enterprise.

Now, corporations, they’re made up of people, and then, of course, the buildings that people work in. The buildings don’t pay taxes. The only people that—the only entities that pay taxes are people. And so, corporations are collections of people that are trying to have good jobs for themselves and promote the future. And so, corporations are made up of people, and the money goes to people, either to hire people or to pay shareholders. And so, they’re made up of people. So, somehow thinking that there’s something else out there that we could just grab money from and get taxes from, and everything could be better, that doesn’t involve people, well, they’re still people. And what I want to do is make America a place where those corporations that have that money decide to invest here.

I was with a company—with a guy who runs a big chemical company. He said, “We just announced a $20 billion factory in Saudi Arabia.” I said, “Why?” He said, “We wanted to build it in Pennsylvania, but the regulators in this country are not willing to act to allow us to get hold of the natural gas, so we’re going to have to go somewhere else.” Tens of thousands of jobs lost, not by the corporations, but by government not doing its job. I want this to be the place where corporations—people—from all over the world want to invest here, grow here, start their businesses.

AMY GOODMAN: Republican presidential candidate Mitt Romney answering a question by Mark Provost, a member of Occupy New Hampshire and Occupy Boston. Mark is joining us in the studio from Manchester, New Hampshire. We’ll go to him after this break.

AMY GOODMAN: Our guest is Mark Provost, who questioned the presidential candidate, Mitt Romney, about the issue of corporate personhood, about Romney’s statement this summer that corporations are people. Mark, can you talk about Romney’s response and what Occupy New Hampshire and Occupy Boston are doing in New Hampshire in these last few days before the primary?

MARK PROVOST: Sure. Thank you for having me on, Amy.

I think—I’m not sure Mr. Romney’s response was—sufficiently answered my question. I asked him—you know, because the corporate profits have reached record highs, directly at the expense of wages, and I cited a JPMorgan report, and, you know, his response was that corporations are people. And I think he had two statements of fact in that three-minute ramble. And one of them was that buildings don’t pay taxes, which I was already aware of—I think most people are. And the second was that corporations don’t pay taxes, but the people in them do. The corporations are actually supposed to pay taxes, but they’re—you know, corporate taxes as a percentage of federal revenue and as a percentage of GDP are both at, you know, 50-year lows.

So, I think his response really, again, is this denial that there’s this class in this country and that there are some people within the corporation, specifically the workers, that are taking it on the chin so that the United States’ executive management can make massive bonuses, and serve their shareholders, you know, rather well, too, now, because the profits largely go to capital gains and dividends. So, I really don’t think his response was—you know, gave color to what I was asking.

JUAN GONZALEZ: But Mark, the attention paid to your question—do you think you would have gotten the same kind of attention prior to the Occupy movement, in terms of a focus on wealth inequality?

MARK PROVOST: Well, I mean, I’ve been writing about income and wealth inequality for a little bit over a year now. But certainly, the Occupy movement has really changed the narrative in this country. And I watched, the night before, Mitt Romney kind of brush off a mic check in the Iowa—Occupy Iowa Caucus. And I’ve always thought that the mic check had a limited shelf life. I mean, Occupy New Hampshire, the group I’m with, we mic-checked President Obama, you know, a month and a half ago on the police brutality. And, you know, I was always aware and always articulated that this mic-check strategy has a limited—limited shelf life. And so, when I saw that Romney brushed it off, and it even kind of galvanized his supporters, I figured, well, why don’t I just pivot tactics a little? Instead of doing a disruptive mic check, I can introduce myself as a member of a legitimate organization or two legitimate organizations, in Occupy Boston and New Hampshire, and I’ll ask him a, you know, direct question. So—

AMY GOODMAN: Tell us the plans for Occupy New Hampshire in these last few days before the primary, your—what your plans are for the Republicans who are running for president and also for the Democrats.

MARK PROVOST: Right. The plan is that—we came up with an idea. We did model it somewhat after Iowa caucus, just in the fact that they announced their plans before us, and we had no plans. So we have Occupy the New Hampshire Primary. And really what it is, it starts today, and it lasts through Tuesday, January 10th, and we’re going to be at Veteran’s Park in Manchester. And we’re going to be joined by Occupy movements across the Northeast: Maine, Occupy Maine, Occupy Vermont, Occupy Worcester, Occupy Lowell, Occupy Boston, Providence, Hartford, New Haven, Albany, Wall Street. So we’re going to have a large inter-Occupy assembly up here. We are going to be having festivals, teach-ins, marches. We have a funeral procession for the American Dream right here at Saint Anselm’s before the major debates on Saturday. So we just have a lot of great things in. Our message is the same as the Iowa caucus. We’re concerned about the disproportionate power and influence of corporations and the wealthiest 1 percent over our political process.

AMY GOODMAN: Well, Mark Provost, we want to thank you very much for being with us, a member of Occupy New Hampshire and Occupy Boston. 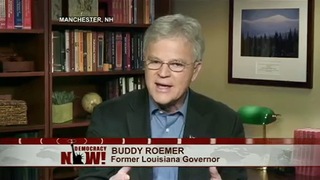