We speak further with Henia Belalia of the group Peaceful Uprising about the issue of climate change, which was not raised in any of the three presidential debates. “The reason that we always bring this back to being a social justice issue is that we’re looking at this infinite growth machine that is the U.S. economy, and in order to continue to grow on a planet that is comprised of finite resources, we are decimating what were once independent economies and having those people be forced to leave their homes and to migrate out of their homes.” Belalia notes that once migrants get to the U.S. they are often treated as scapegoats by leaders who lack the political courage to address global warming. [includes rush transcript]

StorySep 03, 2021A Plea for Help from New Orleans: Curfew & Cops Are Not Aid for the Poor After Ida, Says Malik Rahim

AMY GOODMAN: We’re going to be speaking with Bill McKibben next, Bill McKibben who is the founder of 350.org. But those figures that we are mentioning, I wanted to bring Henia Belalia back into the conversation about who gets hit most. I mean, right now, New York City, hundreds of thousands of people without power. But you say, I mean, in the world when it comes to climate change, the most vulnerable in life become the most vulnerable when it comes to climate change.

HENIA BELALIA: Absolutely, be it because of lacking infrastructure to deal with this kind of—this kind of environmental impact or the lack of economic stability to deal with it. I mean, if we’re looking at countries that have already faced some of the most intense impacts, let’s look at the Maldives, who have already had to—who have already had to evacuate some of their people, or some islands off the coast of India, who are literally already under water. The reason that we always bring this back to being—to being a social justice issue is that we’re looking at this infinite growth machine that is the U.S. economy, and in order to continue to grow on a planet that is comprised of finite resources, we are decimating what were once independent economies and having those people be forced to leave their homes and to migrate out of their homes. And then, once they’re—once they get to the U.S. looking for a healthier and safer future for their children, once we see the economy tanking because of—because of depleting resources and lack of, you know, fossil fuel, we then blame them for the economy rather than looking at the root causes of this. And that’s very similar to what’s happening now, of our leaders not actually looking at the root causes of climate change and not even having the courage, the political courage, to bring that up to the presidential candidacy platform.

AMY GOODMAN: I mean, you have the presidential candidates not mentioning climate change once in the three presidential debates. But Governor Romney actually did mention the issue of climate change in a reference, saying, “President Obama promised to begin to slow the rise of the oceans and [to] heal the planet.” And the people at the Republican convention laughed as he said this. And then he went on to say—what was his line? “I will help your families” [“My promise is to help you and your family”].

HENIA BELALIA: It’s interesting that Romney would say that, following a decision from the Utah Division of Water Quality Board just one week ago to essentially greenlight the first commercial tar sands mine in the United States right here in southern Utah in a place called PR Springs. Some of our allies, Living Rivers, who—you had John Weisheit on your show last week—filed a lawsuit on the claim that, from the Canadian corporation, U.S. Oil Sands, that there was no groundwater to be polluted. Yet it’s called PR Springs for a reason. And some of our own people from Peaceful Uprising, some of our allies at Utah Tar Sands Resistance and Before It Starts have actually been on the ground drinking from that—from that very spring, so…

AMY GOODMAN: I wanted to quote President—Governor Romney exactly. He said, “President Obama promised to begin to slow the rise of the oceans and [to] heal the planet. My promise is to help you and your family.” Before we go to Bill McKibben, Henia, I wanted to ask you about Tim DeChristopher. If you can briefly summarize who Tim is—of course, we’ve had him on Democracy Now! and covered his story—but also the fact that he has now just come out of jail, though he is not free—

AMY GOODMAN: —and how his story relates to the issue of climate change that we’re talking about today.

HENIA BELALIA: Sure. Tim is a climate activist, currently serving a two-year prison—a two-year prison term. Tim, in 2008, in the last month of the Bush administration, disrupted an oil and gas lease auction, feeling that standing outside and protesting with signs was not enough when we were looking at the environmental calamity that we were facing. And so, he actually went in and outbid big oil and big gas in an auction. And—

AMY GOODMAN: He became bidder 70. He picked up the paddle.

HENIA BELALIA: He picked up a paddle, the bidder paddle, and became bidder 70.

AMY GOODMAN: And started to say he—make bids on land in Utah that was being sold off, public lands.

HENIA BELALIA: Exactly, exactly. And all in all, he won about 14 parcels of land worth about $1.8 million. And despite the fact that he raised over $100,000 in the weeks following the auction, which he offered to the BLM, which they did not accept—

HENIA BELALIA: The Bureau of Land Management, absolutely—he was tried early in 2011 and was sent to prison on July 26 of last year. He served his term in a California prison and then a Colorado prison and has now been released, yes, from the federal prison where he was and has been transferred to a halfway home, which means that he is still an inmate. He’s still incarcerated until his release date in April 2013 and is right now getting—transferring into the new terms of his incarceration. And obviously we’re—we’re very excited.

AMY GOODMAN: But is living in a halfway house here in Salt Lake City.

HENIA BELALIA: In Salt Lake City, but again, still—still incarcerated. And we’re very excited to have him out here, obviously, and supporting him through this transition and looking forward to welcoming home in April of 2013. 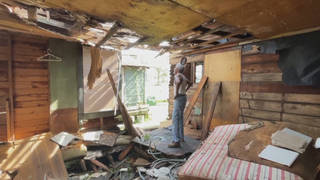 A Plea for Help from New Orleans: Curfew & Cops Are Not Aid for the Poor After Ida, Says Malik Rahim