AMY GOODMAN: Let’s go to the issue of progressive politics. I want to play an excerpt from our six-hour election special last night, about the secret drone war that’s expanded under President Obama. Investigative journalist Jeremy Scahill asked Congressmember Dennis Kucinich on our show about the case of Anwar al-Awlaki, an American citizen killed by a U.S. drone strike in Yemen last year.

JEREMY SCAHILL: I just wanted to ask you—I was talking about you earlier and saying that with the loss of you, or with you not being in the House anymore, there basically isn’t another Democrat who filled the space that you did, particularly on civil liberties issues, on foreign policy issues. And I was—I was just remembering the last time that I visited you in Washington.

We were talking about how you put forward this bill after it became clear that President Obama had authorized the killing of a U.S. citizen, Anwar Awlaki, who had not been charged with any crime, had not been indicted with any crime. And this was well before Awlaki was killed. Of course, he was killed in a drone strike in September of 2011, along with another U.S. citizen, Samir Khan, who had also not been indicted and whose family had been told by the FBI that he had not committed any crimes. Then two weeks later, Awlaki’s 16-year-old son Abdulrahman was killed while he was having dinner with his teenage cousins and friends. And there’s been no explanation as to why that young American citizen was killed in this drone strike. So you had Obama killing—or authorizing operations that killed three U.S. citizens in a two-week period.

And when you, a year before this happened, put forward legislation in the Congress, that didn’t mention Awlaki by name but just said that the president does not have the right to unilaterally authorize the assassination of a U.S. citizen without due process, only six of your colleagues signed on to that legislation. I mean, to me, that’s one of the sort of enduring symbols of your legacy in Congress, the fact that you were one of only half-a-dozen members of Congress—not a single senator—to simply state on the record that American citizens have the right not to be assassinated by their own government without due process.

What—what is your—I mean, what is your sense of how much damage this administration has done to those core causes that you fought for for so long?

REP. DENNIS KUCINICH: First of all, thank you.

I expect that the Obama administration will continue their policies of drone strikes, which have killed hundreds of innocent people and have put to death, through drone strikes, thousands of individuals who were just determined to be combatants, often because they happened to be the wrong age. This is repugnant to morality. It’s morally depraved, this drone strikes. And whether you’re a Democrat or Republican doesn’t matter. This is about what kind of human beings we are.

The drone situation is abominable. By the way, I’m going to have a briefing in Washington on November 16th on the drone policies. We’re going to be bringing some of the top people in the world who have something to say about this and could be considered experts, on civil liberties and other matters.

But our country is changing, you know, and think about this: drones are now being offered and used domestically. How long is it before some local police department uses a drone to intercept and kill a suspect, and when that becomes commonplace? People say, “Oh, well, that can’t happen.” Well, it’s happening now overseas, and we’re committing acts of war in other countries without Congress’s knowledge or without Congress’s assent. We’ve got a problem here. And no matter who wins tonight, we still have a problem.

AMY GOODMAN: That’s outgoing Congressmember Dennis Kucinich of Cleveland, Ohio. He lost in a challenge to Marcy Kaptur when they were redistricted. Marcy Kaptur also won last night in Ohio, beating “Joe the Plumber,” whose real name is Samuel Wurzelbacher.

This is Democracy Now!, democracynow.org, The War and Peace Report. When we come back, we’ll stay with Ben Jealous of the NAACP and journalist Laura Flanders, but we’re going to talk about the ballot initiatives around the country and more about progressive politics. Stay with us. 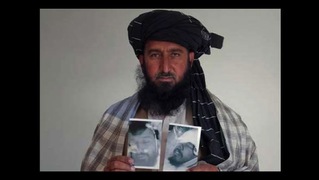