Sharif Abdel Kouddous reports from the streets of Cairo, where thousands of people have taken to the streets in new rallies for and against a controversial referendum backed by embattled Egyptian President Mohamed Morsi. In a potential nod to the opposition, Egypt’s government now says the vote will take place on Saturday, as well as one week later. Egypt’s main opposition leaders are urging their supporters to vote “no” in the referendum instead of boycotting it. [includes rush transcript]

NERMEEN SHAIKH: We turn now to Egypt, where thousands took to the street in mass rallies for and against President Mohamed Morsi last night in Cairo. The country remains starkly divided over the plans for a hotly disputed referendum that is being planned for Saturday. Thousands of Morsi’s supporters gathered at a mosque in Nasr City, three miles from the presidential palace, to, quote, “support the legitimacy” of the president and call on people to vote for the constitution. The Muslim Brotherhood, along with other Islamist groups, organized the rally, and dozens of buses brought demonstrators from across the country for a huge turnout.

SHARIF ABDEL KOUDDOUS: In three days, Egypt is supposed to hold a referendum on a hotly disputed constitution. Today, thousands of people have come to the presidential palace grounds to protest President Morsi and his decision to hold a referendum. The presidential guard has built a wall of concrete blocks to try and prevent people from coming. Protesters came early on, moved some of the blocks away, and now thousands are streaming across and going to the other side to protest at the palace wall.

Protesters are continuing to take down these massive concrete blocks. They have improvised a chain and pulley system here, which they attach to the blocks at the wall. And they’re trying to clear it to let more of the people through easier.

SHARIF ABDEL KOUDDOUS: Is this your first time to protest?

PETER GHATTAS: My name is Peter Ghattas, and I am here today because the president is acting by just himself. He—supposed to be three authorities in this country. He is the sole dictator of this country. He wants to force a constitution on us that nobody want. Clearly, if the presidential palace is surrounded by all those people, clearly the people will not abide by this constitution.

SHARIF ABDEL KOUDDOUS: We’re just a few feet away from the palace walls that are covered in graffiti. And over here on the grassy part, hundreds of people have set up tents, where they’ve been engaged in a sit-in protesting the president. We’re going to talk to a couple of them and see why they’re here.

I’m sitting here with one of the people who’s been engaged in a sit-in. I’m going to translate what he says.

He says, “How can there be a referendum when there’s millions of people who don’t agree with it, on the constitution?” And he says, “People in all of the governorates of Egypt do not agree with this constitution.” He’s criticizing the president for holding the referendum on Saturday, while there’s no stability in the country and there’s protests in the streets. And he says, if he holds this referendum, then the president himself is illegitimate.

That’s just one of the protesters here who’s doing a sit-in. Let’s walk over to the palace walls over here, where there’s tons of graffiti and tons of soldiers which are protecting the presidential compound.

We’re right by the palace walls. This is the site where hundreds of thousands of protesters came last week. They were kicked out by the Muslim Brotherhood, who painted over the walls, whitewashed them. Protesters came back to put graffiti all over them again. There’s guards from the—there are soldiers from the presidential guard who are stationed here along the walls. And there’s graffiti of all kinds. There’s stencils of people who have been killed in the revolution. There’s words like ”batil,” which means “illegitimate,” with pictures of Mohamed Morsi. And the walls are just absolutely covered.

There’s tanks, as well, that are here. The military has been called in to secure the referendum, but it seems there’s no antagonism between the protesters and the presidential guard so far.

Tens of thousands of protesters have come here today to make their voices heard. They have many grievances, but one common theme: They’re against the president’s decisions.

SARAH TADROS: I’m Sarah Tadros. I’m here today because we’re objecting to Morsi and his rule. The way he’s running the country is absolutely unacceptable. The way that he’s making us vote over the constitution on the 15th is not lawful. So he shouldn’t be doing that, to start with. So that’s why we’re here. And that’s why we’re here is because, on Wednesday, all the—for all the people that died here, that were hurt and that died in this place because of the way he’s ruling this country.

SHARIF ABDEL KOUDDOUS: Are you going to vote on Saturday?

SARAH TADROS: I’m hoping that it’s going to be delayed. But if no action is taken and we do have the vote on Saturday, I do have to do my part and go vote.

MYRIAM ZAKI: My name is Myriam Zaki. And one of the reasons I’m here is because I simply find it outrageous that the constitution that they are trying to pass to the Egyptian people is not in accordance with any of the international standards. I mean, we’ve been raised in Egypt to believe in democracy, to believe in freedom, to believe in equality, to believe that Egypt is for all—Christian, Muslim, women, men, children. We went down to the streets and made a revolution, and we’re paying with our lives every day and the quality of our lives every day, in order to find more equity in society, to find more justice in society. And nobody is saying anything about the outrageous human rights violations that occurred just last week here. I mean, people were abducted. People were tortured. Women were just—I mean, they—I can’t tell you what they do to women. And it’s all politicized, and it’s all organized, and women are targeted. And they are doing this just to scare us.

SHARIF ABDEL KOUDDOUS: So, you’re going to vote on Saturday?

SHARIF ABDEL KOUDDOUS: Protests like the one we’re at today have been going on for three weeks now, ever since Present Morsi’s November 22nd constitutional declaration. Not just in Cairo, but in governorates across Egypt, people are hitting the streets. They’ve been against the constitutional declaration. They’re against the draft constitution. And now they are against the referendum that is being planned for just three days from now, on Saturday. President Morsi has chosen to double down on his plans and is deciding to hold the referendum over the opposition of many in the country. It remains to be seen what the outcome will be, but the splits that are happening from this division may take years to heal.

AMY GOODMAN: And thanks so much to Sharif and Hany for that report from just outside the presidential palace. We’ll continue to follow this controversy, what is happening, the ongoing revolution that continues to unfold in Egypt. And you can go to our website at democracynow.org for all of Sharif’s reports. 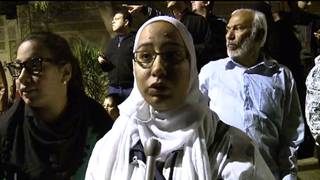