Three days after the United Nations Climate Change Conference began here in Doha, a Qatari court sentenced a local poet to life in prison, a move that shocked many activists in the Gulf region and human rights observers. The sentencing of Mohammad ibn al-Dheeb al-Ajami came nearly two years after he wrote a poem titled “Tunisian Jasmine,” supporting the uprisings in the Arab world. “We are all Tunisia in the face of repressive elites!” al-Ajami wrote. “The Arab governments and who rules them are, without exception, thieves. Thieves!” We speak to his attorney and a member of Qatar’s National Human Rights Committee. [includes rush transcript]

AMY GOODMAN: Local music at the Souq, or the marketplace, last night here in Doha, Qatar. This is Democracy Now!, democracynow.org, The War and Peace Report. I’m Amy Goodman. We are broadcasting here live in Qatar, in the Persian Gulf. Three days after the United Nations Climate Change Conference began here in Doha, a Qatari court sentenced a local poet to life in prison, a move that shocked many activists in the Gulf region and human rights observers. The sentencing of Mohammad ibn al-Dheeb al-Ajami came nearly two years after he wrote a poem called “Tunisian Jasmine,” supporting the uprisings in the Arab world. In the poem, he called on Arabs to get rid of what he described as “imposed regimes.”

AMY GOODMAN: Special thanks to Ali Issa for help with the translation.

NAJEEB AL-NUAIMI: So, in November, they put a call for him: “Mohammad, you have to come to the police, to report to the police. You have, Mohammad, to come to the police and report.” And he kept saying, “Why should I report? For what?” Then he called the son of the emir—he is a friend of his son, by the way—and told him, “Why they are calling me in the police?” He said, “No, no, no. Just go there, and don’t worry. It’s just a routine register—I mean, some against you.”

He went there, but he felt there was something, you know, planned for him. And he was questioned by the police. “You said that poem?” He said, “Yeah, I said that poem.” “Where?” “I said it in my—and I’m replying to the other poem. So what is wrong with it?” He said, “You meant to say that, to encourage in the attempting of the coup?” He said, “No, I didn’t.” He denied it. And he said, “Ah, but you spoke a little bit that you were saying that the emir is not doing his job properly, according to the constitution.” He said, “No, who made this interpretation?” They said, “Well, we think it’s been interpreted that way.” So he said, “No, no, no, no, no. If I have insulted the emir on this, just continue, please, reading the poem. You will see in the end of it, I was really thanking the emir, not only disappointing him.” Then they said, “OK. Unfortunately, we have to arrest you.” That moment, with his cousins, friends, and he said, “I will need—please, call Dr. Najeeb al-Nuaimi. I need him to be my lawyer.”

Then I have received a phone in the evening, same night, telling me that there is somebody, Mohammad. “Do you know Mohammad?” I said, “No.” “Heard his poem?” I said, “Never. I don’t hear this kind—you know, I don’t have time, in fact. And it’s not my hobby much.” And I said, “No, no. What is wrong with him?” And he said he had been arrested because he said a poem. I thought, “How come?” We never had in the history of our judicial system, or even the Arab system, somebody will be arrested because he said a poem. How many poets in our Arab history attacked the ruler, attacked everybody? I mean, even in ancient Islamic time, there are—you know, everything about the kings, about the prince, nobody hanged them. They gave them money to shut their mouth. That’s the way. They give him money, then he shuts his mouth. But why him? They said, “I don’t know.” So I felt something unique in this case, something unbelievable, to have somebody to be arrested for a poem.

AMY GOODMAN: And so, tell us about this decision this past week in court, after Mohammad al-Ajami was in jail in solitary confinement for 11 months.

NAJEEB AL-NUAIMI: 29th of November, I attended. One word: Mohammad as-Ajami, sentence for life. I was shocked. “What? On what basis?” He had no time to defend himself. He had no time for me to defend him. He didn’t accept my written memorandum. So he just made it for himself. So it’s a kind of revenge. It became personal and a revenge against Mohammad. And anyhow, we appealed today, before the court, and the court sees—the first session will have an appeal on 30th of December.

AMY GOODMAN: Does the emir have the power to pardon Mohammad al-Ajami?

NAJEEB AL-NUAIMI: He has. He has.

AMY GOODMAN: Have you appealed to the emir?

AMY GOODMAN: What message does this send to activists in the Gulf? I mean, that is what Mohammad has written about, the Arab Spring.

NAJEEB AL-NUAIMI: Really, it put Mohammad really as a leader of—leader of the poets or the all Arabs, and really supporting the revolution around the Arab world, with starting with Tunisia. And his poem was repeated in Egypt, repeated in Libya, repeated in the others. He puts in the lead.

AMY GOODMAN: The decision came down in the middle of a global conference—

AMY GOODMAN: Human Rights Watch wrote, “A draft media law approved by the State Cabinet in [June 2012] would prohibit publishing or broadcasting information that would [quote] 'throw relations between the state and the Arab and friendly states into confusion' or 'abuse the regime or offend the ruling family or cause serious harm to the national or higher interests of the state.'” The emir has not yet ratified this draft law.

NAJEEB AL-NUAIMI: Article 53, the bad Article 53. I have really attacked it. I think it’s a shame to have an article like that while we really speak loud for the freedom of the other people. This sentence can put anybody—anyone—in the prison, and he has to pay a one-million-riyal penalty, for any reason. It’s very vague. If—I have said, in my Twitter, I said, the first man who will be arrested is Faisal al-Qassem, who make, you know, what called “Crossfire,” something like Crossfire on Al Jazeera, where he have two guys, and he starts telling him, “You know, your government is saying this and saying that, and your government is saying…” So, if these governments are a friend of Qatar, then he will be in prison. If they will apply it, the first people who will go to prison are Al Jazeera team, Al Jazeera editors.

AMY GOODMAN: That was Najeeb al-Nuaimi, attorney for Mohammad al-Ajami, the Qatari poet sentenced last week to life in prison. On Thursday, we traveled to Qatar’s National Human Rights Committee, and I met with a committee member who was, well, chosen by the emir, Mohamed bin Saif al-Kuwari, to talk about the sentencing of Mohammad al-Ajami.

AMY GOODMAN: Do you think that he should be in prison for the rest of his life?

MOHAMED BIN SAIF AL-KUWARI: I mean, in human rights, I can’t—I cannot see should have not, because this is in the court. I mean, this is his case in the court, his case and the judge. I can’t answer this and quickly without to see the file, without to see the cases in details—well, I mean, in deep details. I cannot answer this is OK this is in prison or not. But for human rights in Qatar, always to see this is—this people or this persons will get his rights fully—total rights for him, even in the prisons or in the courts, about the procedure. This is very important with us, is the procedure is according to the international conventions, international laws, also something in human rights.

AMY GOODMAN: What specifically was in the poem that violated the law here in Qatar?

MOHAMED BIN SAIF AL-KUWARI: About the human rights, just will talk the people, you can’t do it everythings. You can’t talk everythings. But according to the law, you cannot attack the symbols or—and the states without anythings. You have to write about some things for you to talk about anythings, but with some studying or report with you.

AMY GOODMAN: So, if someone read Mohammad’s poem today in Qatar out loud, they too would be sentenced to life in prison?

MOHAMED BIN SAIF AL-KUWARI: Yes. Now this is according to the judgments last month.

AMY GOODMAN: Has the media covered the case of the poet? Has Al Jazeera broadcast about the story of the poet being imprisoned for life here in Qatar?

MOHAMED BIN SAIF AL-KUWARI: I didn’t see on the Al Jazeera. But I saw on the BBC only. But Al Jazeera and the newspaper in Qatar, I didn’t see any articles to talk about Mohammad ibn al-Dheeb, the judgments about that, yeah. I don’t know why, but maybe for—for next times, maybe will do it. But I don’t know. I haven’t any explanation for that.

AMY GOODMAN: What does that say about freedom of the press here?

MOHAMED BIN SAIF AL-KUWARI: Yeah, it is a freedom. Yes, it is for media. You are talking about the media. Yes, the media. This is a freedom of opinion, expressions.

AMY GOODMAN: But it’s interesting that you say BBC covered it, but Al Jazeera did not cover it.

MOHAMED BIN SAIF AL-KUWARI: As yet. Maybe future, maybe, because they—they ask Dr. Ali when we are preparing now.

AMY GOODMAN: Yes, that is Qatar’s National Human Rights Committee member, Mohamed bin Saif al-Kuwari, talking about the sentencing of the poet, Mohammad al-Ajami here in Qatar to life in prison for his poem around the Arab Spring. We will bring you Monday the results of the U.N. climate change summit from Oslo, Norway, when the Nobel Peace Prize is announced. We’ll be broadcasting from there. I’ll be speaking at Norway, Oslo’s Literature House. 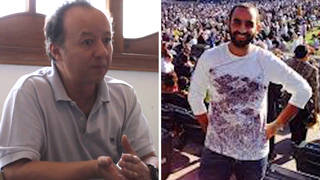