“The Most Obdurate Bully in the Room”: U.S. Widely Criticized for Role at Climate Talks

We speak with two representatives of civil society who have attended the U.N. climate talks for the past decade. “We strongly believe that we need a high level of ambition, we need urgent action, and we need action based on equitable sharing of the atmospheric space,” says Sunita Narain, Indian environmentalist and director general of the Centre for Science and Environment. “So we said to the Indian government, we expect the Indian government to be hard on what the world needs and to walk out now, because I think the time for talking is gone. We need hard action.” We are also joined by Tom Goldtooth, a member of the Indigenous Caucus and executive director of the Indigenous Environmental Network. “There’s no guarantee we’re going to have a strong Doha deal coming out of here,” Goldtooth says. “So we’re committing as Native indigenous peoples from the United States to go back and have highest-level government-to-government meetings with Obama and his administration to hold him accountable to some commitments he made on climate.” [includes rush transcript]

AMY GOODMAN: This is Democracy Now!, democracynow.org, The War and Peace Report, as we turn to two more guests today here in the Qatar National Convention Centre, where, well, according to the figures, 10,000 people have gathered, far less than the conventions of the past of these U.N. summits. We’re joined by Sunita Narain, Indian environmentalist, director general of the Centre for Science and the Environment, and Tom Goldtooth, executive director of the indigenous Environmental Network. He is a member of the Dine’ and Dakota nations and lives in Minnesota.

AMY GOODMAN: Sunita, you’ve called for the Indian delegation to pull out of these talks. Why?

SUNITA NARAIN: Well, I said we strongly believe that we need a high level of ambition, we need urgent action, and we need action based on equitable sharing of the atmospheric space. So we said to the Indian government, we expect the Indian government to be—to be hard on what the world needs and to walk out now, because I think the time for talking is gone. We need hard action.

AMY GOODMAN: Tom Goldtooth, you are a Native American leader in this country who has attended these U.N. climate summits for the past decade, and you met with the top of the COP. That’s the Conference of Parties, this summit. What was your message?

TOM GOLDTOOTH: Well, we invited him as a caucus of indigenous peoples from throughout the world. And our approach with the minister, and as the president of the COP, is from a tribal-to-tribal level. And he acknowledged us for who we are, because he said that they are indigenous peoples of this land. And that helped us to convey a clear message, that there has to be a commitment in this climate platform, as we move on, that recognizes our collective rights as indigenous peoples. Many of the solutions that are coming out framed with the KP, the LCA—

TOM GOLDTOOTH: Yeah, and these mitigation and adaptation planning, involve indigenous peoples on the front line, whether it’s involving market-based solutions around clean development mechanisms, carbon offsets in forests and agriculture, REDD, for an example—Reducing Emissions from Deforestation and Forest Degradation—it all involves resources in our local communities. So, the need for recognition of our self-determination and full rights is very critical, and he acknowledged that. And we ask him in a follow-up letter that we’re sending to him, as we move on to the next Conference of the Parties in Poland, if he can be a champion of these issues that are dear to not only our heart, but to him, as well.

TOM GOLDTOOTH: Well, I’m here as an executive director of a nonprofit indigenous organization, and in our network are Native indigenous communities on the front line of struggle, struggling and resisting unsustainable Western forms of development—for an example, Red Oil in Alaska, who’s constantly trying to stop Shell Oil and our government from pursuing offshore oil drilling, and the tar sands in Alberta. These are communities we network with. We also network with our federally recognized tribes, who have a government-to-government relationship with the United States government. So, we’re committing, as we leave here, because there’s no guarantee we’re going to have a strong Doha deal coming out of here—so we’re committing as Native indigenous peoples from the United States to go back and have highest-level government-to-government meetings with Obama and his administration to hold him accountable to some commitments he made on climate. And one of our tribes, the Crow Nation in Montana, adopted him as a member of their family.

AMY GOODMAN: Sunita Narain, what would an equitable deal look like? Now, I think it’s important to point out it was your organization that exposed last year in a conversation with one of the climate envoys of the United States, Jonathan Pershing, that he said to you privately, if equity is in, the U.S. is out. Talk about the significance of that and what you want to see today.

SUNITA NARAIN: Amy, let’s be very clear. Climate change is such a difficult issue for the world, because it involves sharing the ecological space of the world, the common atmospheric space, but because emissions of carbon dioxide are linked to economic growth, it is also about sharing the economic space of the world. So, in some senses, climate change is a tough issue, because we are telling nations that this is the right to development of all. And that’s been the issue for now many years that has been on the table, where there are countries that have overused their share, there quota, if you would say, of the earth’s atmospheric space, and there are countries who need the right to development. And that’s been the tension that we have seen.

Now, to move ahead—and that is why the U.S. government has to change its points of view—to move ahead, we need a recognition that this is an issue of rights and justice, that this is an issue which involves countries which have to reduce their emissions, countries who must be given the right to development. It is also an issue that countries with the right to development must develop differently. We do not want to first pollute and then clean up. So we need money, we need technology, to be able to do things differently. That’s the only deal that is possible for an effective deal, a meaningful deal, on climate change. But unfortunately, the United States is like the most obdurate bully in this—in this room. It is the elephant in the room that we don’t want to talk about. And it is the elephant that refuses to recognize the fact that it is living in a world that is interdependent.

AMY GOODMAN: Well, I want to thank you both very much for being with us. I also just got news that Todd Stern’s news conference, the chief U.S. envoy, very difficult for the press to reach him—I just went up today; he wouldn’t answer questions—had held a news conference, said he would at 2:30 today, Qatar time, canceled it 'til 5, and now we've—it’s been announced that it’s been canceled altogether. Sunita Narain, I want to thank you very much for being with us, Indian environmentalist, director general of Centre for Science and Environment, and Tom Goldtooth, the executive director of the Indigenous Environmental Network, member of the Dine’ and Dakota nations, lives in northern Minnesota.

This is Democracy Now! When we come back, the jailing of a Qatari poet for life happened just a few days ago. Stay with us. 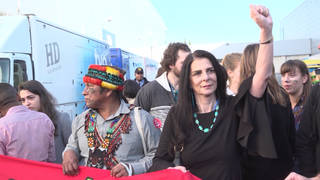