For the past three months, students across the Canadian province of Quebec have waged an unprecedented strike against rising tuition. On Friday, more than 100 students were arrested in Victoriaville. One protester reportedly lost an eye after being shot by a police projectile. The future of the strike is now up in the air. Over the weekend, the government proposed an offer to end the strike, but student leaders say they are refusing to recommend the deal to student protesters who will vote on the offer on 150 campuses over the next three days. “We are at 170,000 people in strike in our province here,” says Gabriel Nadeau-Dubois, spokesperson for CLASSE, the main coalition of student unions involved in the student strikes in Quebec, Canada. “So it’s really an historical mobilization, an unprecedented mobilization by the Quebec students, on the specific issue of tuition fees.” [includes rush transcript]

StoryApr 23, 2018How Black Students Helped Lead the 1968 Columbia U. Strike Against Militarism & Racism 50 Years Ago

AMY GOODMAN: We turn now to Canada, where students in the province of Quebec have reached a tentative deal with the government over proposed tuition hikes. The deal puts an end to nearly three months of a class boycott by hundreds of thousands of students and the longest student strike in the province’s history.

Students in Quebec pay the lowest post-secondary education tuition in Canada, and the provincial government’s plan would raise tuition by 75 percent over five years. The agreement, reached after 22 hours of negotiations between student leaders and the government, includes the government’s tuition increase, but also calls for the creation of a “provisional council” that would review spending by universities and could reduce fees students pay on top of their tuition. Under the tentative deal, universities would decrease administrative fees to offset the increase in tuition fees. Student leaders say they’re refusing to recommend the deal to their membership. Students across Quebec will cast their vote on the agreement this week.

During the May Day protests in New York last week, Democracy Now! spoke to Lily Schwarzbaum, a student at McGill University in Montreal, about the strike.

LILY SCHWARZBAUM: It’s really important for the States to look at Quebec as a model as to what people should be fighting for. Often people say of Quebec, “Oh, it’s only like $1,625. Like, you should really pay your dues.” And it’s like, no, the rest of you are getting screwed. Like, you should think about what we’re fighting for. And I think it’s really important for North America, for Anglophone North America, to, like, take this issue seriously.

AMY GOODMAN: To talk more about the student strikes and the agreement proposed this weekend, we go to Montreal, which has seen more than 200 student protests in the last 80 days. We’re joined by Gabriel Nadeau-Dubois, the spokesperson for CLASSE, the main coalition of student unions involved in the Quebec student strikes, and, by Democracy Now! video stream, Eve-Lyne Couturier is joining us from IRIS, which is an institute of socioeconomic research.

We begin with Gabriel. Tell us about this strike, the significance of it.

GABRIEL NADEAU-DUBOIS: Well, it is a very long strike. In fact, it is the biggest strike in Quebec history, which has a very big history of student strike. We’re talking about a strike of 13 weeks, starting today, a strike who, at the biggest, was held by 300,000 Quebec post-secondary students. At the moment, we are at 170,000 people in strike in our province here. So it’s really an historical mobilization, an unprecedented mobilization by the Quebec students, on the specific issue of tuition fees. The Liberal government here decided to increase tuition fees by 75 percent, starting next year and over five years.

And the mobilization really started about this specific issue, but after a few weeks of strikes, we have saw unions, community groups, women groups entering in the movement. And now what we are seeing here in Quebec is what people call the Maple Spring, the ”Printemps érable” in French. So it’s really a mobilization that is starting to be more and more general and to address more than just the specific issues of tuition fees, but also the general direction that has taken Quebec since the Liberal Party here came to power in 2003.

AMY GOODMAN: So, for three months, students have not gone to school?

GABRIEL NADEAU-DUBOIS: Well, it’s not all the students of Quebec who are on strike, but a critical number of students are on strike. Yes, it’s now three months. It’s—even for—even for Quebec, it’s an unprecedented strike in terms of duration and in terms of popularity. So it’s really a movement that no one really went—saw coming before it was a reality. So, yes, students from university and colleges all over the province who are in strike, so who are not going to their classes for three months now.

AMY GOODMAN: And the significance of the deal that was reached this weekend?

GABRIEL NADEAU-DUBOIS: Well, it’s very—it’s a very complicated deal. First, the government decided to continue to increase tuition fees, but for the first semester they decided to reduce the administrative fees of the universities at the same level of the increasing of tuition fees. So, generally, the student bill won’t go up next semester. But what is particular in this offer is that the government accepted to put—to fund a provisory committee of 19 person, on which four will be students. And this committee will have the role to look at the expenses for universities to find out money that could be cut in order to invest this money in the reduction of the administrative fees of the universities. But so, basically what the government is asking us is to abandon our strike in the ends of a provisory committee, on which we will be [a minority]. So it’s a deal that is already—that is already provoking a lot of hesitation in the students’ assemblies.

AMY GOODMAN: Eve-Lyne Couturier, can you talk about how college costs in Quebec compare with the rest of Canada and the United States, and the significance of this strike?

EVE-LYNE COUTURIER: Well, of course, in Quebec, the student fees are less high than in the rest of Canada. But then again, you have to compare with the whole picture, not only in North America, but in the whole developed countries. And then the students’ fees in Quebec are much higher than the majority of the countries. So, and you also have to remember that when you talk about tuition fees, there’s also a debt that is associated with that. So students who go to school have to pay a lot of things. It costs a lot. And the average debt in Quebec is also lower than in, let’s say, Ontario. And hiking the fees, hiking the tuition, will mean to put the burden of the debt more and more on the shoulders of the students.

AMY GOODMAN: And the significance of this settlement, Eve-Lyne? We just have 20 seconds.

EVE-LYNE COUTURIER: Oh, well, I would say, the burden of the proof is on the students. And that means a lot of things, because even though the students proved that there’s a problem in the financing of the universities, the government will decide to implement or not the cuts to refund the universities.

AMY GOODMAN: Well, Eve-Lyne Couturier, I want to thank you for being with us, and Gabriel Nadeau-Dubois, spokesperson for CLASSE, the main coalition of student unions involved in the student strikes in Quebec. We will report on what the students vote this week.

How Black Students Helped Lead the 1968 Columbia U. Strike Against Militarism & Racism 50 Years Ago 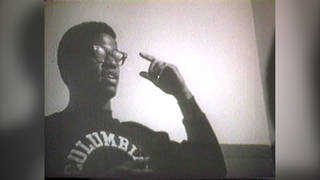 How Black Students Helped Lead the 1968 Columbia U. Strike Against Militarism & Racism 50 Years Ago