Ex-Ohio Secretary of State Ken Blackwell Questioned on Vote Suppression, from ’04 to Wave of ID Laws

A recent study by the Brennan Center estimates that new voter ID laws could disenfranchise more than five million people across the country in November, including voters in swing states such as Pennsylvania, New Hampshire, Virginia and Wisconsin. On Monday, Democracy Now! producer Mike Burke spoke with a prominent supporter of the new voter IDs laws, Ken Blackwell, vice chair of the Republican National Committee’s platform committee and the former Republican secretary of state in Ohio. In 2008, Blackwell oversaw the election process for Ohio while serving as state co-chair of the committee to re-elect George W. Bush. His role in the Ohio election, which saw George W. Bush narrowly beat John Kerry, remains controversial to this day, making him the target of over a dozen lawsuits. [includes rush transcript]

AMY GOODMAN: This is Democracy Now!, democracynow.org, The War and Peace Report. We are “Breaking With Convention.” It’s “War, Peace and the Presidency,” as we cover the Republican National Convention here in Tampa, inside and out.

A coalition of groups are planning to stage a protest outside the Republican National Convention today to decry new voter ID laws and cutbacks in early voting. A recent study by the Brennan Center estimates new voter ID laws could disenfranchise more than five million people across the country come November, including voters in swing states such as Pennsylvania, New Hampshire, Virginia and Wisconsin. Meanwhile, Florida and Ohio have been criticized for cutting back on early voting. In June, Attorney General Eric Holder described the voter ID measures as a new form of a “poll tax.”

But many Republican leaders have defended the new laws, saying they’re needed to prevent voter fraud. On Monday, Democracy Now! spoke with a prominent supporter of the new voter IDs laws, Ken Blackwell, vice chair of the Republican National Committee’s platform committee and the former Republican secretary of state of Ohio. In 2004, he oversaw the election process for the state of Ohio in the state while serving as co-chair of the committee to re-elect George W. Bush in Ohio. His role in the Ohio election, which saw George W. Bush narrowly defeat John Kerry remains controversial to this day. Blackwell was the target of over a dozen lawsuits over his handling of the 2004 election.

Well, on Monday, Democracy Now! senior producer Mike Burke ran into Ken Blackwell in the halls of the Republican National Convention. Mike began by asking Ken Blackwell about the state of voting rights in the country.

KEN BLACKWELL: The past 40 years, we’ve concentrated on making sure that the franchise was not impeded by onerous regulations and unfair processes. In the last six years, we’ve looked at the other voting right, and that is the right to make sure that legal ballots are not negated by fraudulent ballots. And as a consequence, I think there’s a good balance that we’ve been able to strike between those two voting rights.

MIKE BURKE: And how much of a problem are fraudulent voting?

KEN BLACKWELL: Well, let me put it to you this way. We have enough evidence that there are folks who either screw up the process deliberately or accidentally. Judicial Watch has done an exhaustive review of 2008. For instance, they found that 1.3 million registrations were collected by ACORN and Project Vote, and of that, over 400,000 were—were bad. It’s like I tell people all the time, if you protect the integrity and safeguard the integrity of the ballot box by putting a duty on citizenship and voting, by saying that we have an obligation to make sure that commonsense steps are taken against fraud, then you protect against fraud and—because, at the end of the day, what’s most important is that people believe that the electorate is an accurate picture of what was done.

MIKE BURKE: Now, what about the studies that show that some of the new voter ID laws will actually disenfranchise people, predominantly people of color as well as older citizens?

KEN BLACKWELL: That is not backed up by fact. Whether you take Georgia, take Indiana, you take several of the other states that have had voter rights laws, compare voter registrations and voter participation before the voter ID and after, and what you find, particularly in Georgia—I was particularly interested in the study that was done there—Hispanic voting went up 142 percent, and African-American voting went up 43 percent.

MIKE BURKE: Now, but we always hear about these stories of, like, longtime voters who have been voting for decades, who might not have the right type of ID, because they no longer drive, and that they—it seems like they cannot vote.

KEN BLACKWELL: Well, you know, again, the courts have taken a hard look at this, and they’ve basically said that there is no evidence that that is a—that is a problem. The Supreme Court said that in the Indiana case. Now, I think it is incumbent upon all communities to make sure that voter IDs are made available free of charge and that we use a lot of our volunteer efforts to make sure that anybody who doesn’t have a voter ID gets one. IDs are very much a part of our culture, whether you want to take out a library book, you want to buy alcoholic beverages—you have to prove that you’re 21—or to get on an airplane. You know, so voter IDs are not out of the ordinary in terms of expectations in American culture.

MIKE BURKE: One more question, sir. Last week on our program, we interviewed the journalist Craig Unger, who has a new book about Karl Rove. He dedicates a lot of time in the book to the 2004 election in Ohio.

MIKE BURKE: And he raised serious questions about—

KEN BLACKWELL: What kind of questions did he raise?

MIKE BURKE: Well, he had questions about the accuracy of the vote. And he—

KEN BLACKWELL: Look, let me tell you something about—no, no, let me tell you something about 2004. I hear a lot of urban myths about 2004 about voter suppression and long voter lines. And the case study that they use is Franklin County. Franklin County is where Columbus is located, and there were long lines. But there were long lines due to tremendous efforts by both sides to get out the vote and a decision that was made that students at Ohio State University would vote in Columbus as opposed to their home precincts.

But what I think is incumbent upon you to get across to your folks, who view you, is this: that in Ohio, voting machine location is determined by 88 county boards of elections. Each one of those boards of elections have two members—two Democrats and two Republicans. In 2004, the head of the Franklin County Board of Elections was a guy by the named Bill Anthony. He was a labor leader. He was vice chairman of the Franklin County party, Democratic Party. He was a co-chairman of the Kerry campaign, and he was African American. I don’t think that he would have allowed voting machines to deliberately not be placed in African-American communities.

MIKE BURKE: Sir, but is—

KEN BLACKWELL: But it is—no, excuse me, sir—but it is this notion that the secretary of state made a determination, therefore getting long lines that frustrated African-American voters, that was not the case. I haven’t read the book, so I won’t comment on it.

MIKE BURKE: But I’m not asking about the book, in particular, sir.

MIKE BURKE: But, sir, he asked about a company called SMARTech.

KEN BLACKWELL: I don’t know anything about SMARTech.

MIKE BURKE: My understanding is that Ohio actually had a contract with this company.

KEN BLACKWELL: You know what? Let me tell you something.

KEN BLACKWELL: I, in fact, gave you my time.

KEN BLACKWELL: And—excuse me. I gave you my time. In Ohio in 2004, we had a record turnout of African-American voters.

MIKE BURKE: But that’s not my question.

MIKE BURKE: My question, sir, was about SMARTech.

KEN BLACKWELL: My answer—my answer is this—

MIKE BURKE: Right, but you’re not answering my question.

KEN BLACKWELL: No, my answer is this: Ohio, examined by Ohio newspapers and election authorities, had a good election, a clean election—not a perfect election, but a good and fair election—

MIKE BURKE: But the question—

MIKE BURKE: But the question raised in this book, sir—

KEN BLACKWELL: That is my answer. Over and out.

AMY GOODMAN: That was Ken Blackwell being interviewed on Monday by Democracy Now! producer Mike Burke at the Republican National Convention here in Tampa. The former Ohio secretary of state refused to answer questions about SMARTech, the Republican-linked firm hired by the state of Ohio ahead of the 2004 elections to host the backup servers for electronic voting records on election night. SMARTech is featured prominently in Craig Unger’s new book, Boss Rove: Inside Karl Rove’s Secret Kingdom of Power . Unger talked about Blackwell and SMARTech last week on Democracy Now!

CRAIG UNGER: And somehow or other, in 2004, in the state of Ohio, which was the single most crucial state in the Electoral College, when it came to the actual voting, the secretary of state of Ohio, a guy named Ken Blackwell—and the secretary of state’s job is to—part of it is to ensure fair, nonpartisan elections—happened to be co-chair of the Bush campaign. Now, there’s no conflict there. And he gave a contract to host the fail oversight for the Republican—rather, for the votes in 2004, to none other than SMARTech. And this is where things went a little crazy. […]

And as the votes came in, it was clear it was going to be an all-nighter in terms of the results. And around 11:00, Florida was called for Bush, and that meant the entire fate of the election hinged on Ohio. So, suddenly—excuse me—the servers for the secretary of state’s computers were flooded with queries.

CRAIG UNGER: Exactly. And they needed to lock into the fail oversight in Chattanooga with SMARTech. And this is where the results went a little crazy. And suddenly, an enormous number of irregular returns came in, and the votes shifted. The exit polls had shown Kerry winning Ohio, and therefore the election. And it looked like he had won the presidential election. I remember that day vividly because I was getting reports from the exit polls, and I went around telling people it looked like Kerry had won. But there was a 6.7 percent difference between the exit polls and the actual results. And as a result, the election ended up going to Bush. And that was the entire story. 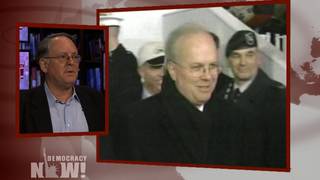