Hurricane Isaac has made landfall in southern Louisiana as it heads toward New Orleans on the seventh anniversary of Hurricane Katrina. The Category 1 storm is producing winds of at least 80 miles per hour and is expected to bring heavy flooding. It marks the most serious test of New Orleans’ rebuilt levees. At least 200,000 people have lost power throughout the Gulf Coast area, and some 50,000 were slated to evacuate New Orleans. We go to New Orleans to speak with Washington Post reporter Manuel Roig-Franzia. [includes rush transcript]

AMY GOODMAN: Hurricane Isaac has made landfall in southern Louisiana, as it heads towards New Orleans on the seventh anniversary of Hurricane Katrina. The Category 1 Isaac is producing winds of 80 miles per hour, expected to bring heavy flooding, marking the most serious test of New Orleans’ rebuilt levees in the seven years since Hurricane Katrina.

We’re joined right now by Manuel Roig-Franzia, who we had on the show, interestingly, talking about his book on Marco Rubio. But he is in New Orleans for the Washington Post covering New Orleans. He was there seven years ago, as well.

Talk about, Manuel, what is happening right now, the people evacuating. Are levees being topped?

MANUEL ROIG-FRANZIA: Yeah, the big development this morning is that a levee in Plaquemines Parish, which is in a very low-lying rural area of southeastern Louisiana, was overtopped. And we’re seeing some pretty impressive images of flooding from down in that region. This is an area that is perpetually pounded by hurricanes. It doesn’t have same level of protection that some of the more urban areas do. And they are used to this, but it’s still unsettling.

NERMEEN SHAIKH: And, Manuel, how many people now are without power?

MANUEL ROIG-FRANZIA: Big power outages being reported, more than 400,000 in Louisiana. That number is expected to go up. The reason is that this is a weird hurricane. It is not the power of a Katrina. It’s a Category 1 storm with winds of about 80 miles per hour. But it’s moving very, very slowly. At times, it has been completely stalled. And the significance of that is that when a hurricane stops, it’s able to drop a huge amount of water on a single spot rather than dropping some rain and moving on. And that creates the worry of really a catastrophic potential for flooding.

AMY GOODMAN: Can you talk about the numbers of people who are evacuating, Manuel?

MANUEL ROIG-FRANZIA: There has not been a mass evacuation from the urban areas in New Orleans. I was here the year before Hurricane Katrina. It was a hurricane called Ivan, another big, big hurricane, a Category 5 hurricane. And 600,000 people evacuated from New Orleans. This year, the mayor of New Orleans, Mitch Landrieu, decided not to issue a mandatory evacuation order. That was based on their assessment of the strength of this storm and the risk it presented to New Orleans. That said, people—some people have still decided to leave. But I can tell you, from going around the city over the last couple of days, that thousands and thousands of people decided to stay here and weather the storm.

AMY GOODMAN: And can you talk about the reports of Hurricane Isaac ripping off the Plaquemines Parish President Billy Nungesser’s house roof?

MANUEL ROIG-FRANZIA: I haven’t heard that. Billy Nungesser is a well-known figure here. He is a prolific and eloquent spokesman for his area and something of a—something of a legend in the making, a very passionate advocate for his region. And if indeed this is correct that his roof was ripped off by this, I’m sure we’ll hear about it in great detail. And in some ways, it would become, if that report is true, a symbolic image of the severity of this storm.

NERMEEN SHAIKH: Manuel, because of the effects of Katrina, even a weaker storm is strong enough to batter the coast and threaten flood barriers, is that right?

MANUEL ROIG-FRANZIA: I broke up just a little bit there. If you could repeat that question?

NERMEEN SHAIKH: I’m saying that because it’s been seven years since Hurricane Katrina and the damage that was done as a result of that hurricane, the city is still very vulnerable, and even a weaker storm could cause a great deal of damage.

MANUEL ROIG-FRANZIA: I think that that contention would be debated by some. The reason is that the federal government has allocated 14.5 million—billion dollars, 14.5 billion, with a “B,” dollars, for levee improvements, flood protection systems. They’ve set up a very intricate, vast and complicated system of pumps and floodgates, most of which is in place now. And these are impressive structures. You walk up to one of these levees, and they soar into the sky. The Army Corps of Engineers says that it has the world’s largest drainage pumping station, the largest in the world here. And this storm, particularly because of the amount of water that it is expected to dump, will be the first real test of this new system that we have in place. And if it doesn’t perform well, you can be certain that you will hear the howls, not just from New Orleans, but from all other parts of this country. It’s a very, very public test of this very expensive system.

AMY GOODMAN: Final comments, Manuel, before you leave, for what people are preparing for, the topping over of the levee in Plaquemines Parish, and what you feel needs—the kind of aid that the people of the region need?

MANUEL ROIG-FRANZIA: Well, there’s no doubt that in Plaquemines, if you want to talk about a place on earth where people aren’t going to wait around for the federal government or anyone else to take care of them, it would be Plaquemines Parish. This is a place where people kept boats in their backyards. And there’s sort of an independent spirit that exists down there. It was a place that was really whacked hard by Hurricane Katrina. And I did some reporting and writing down there. I can tell you there’s a real pioneer spirit down there. And as we speak, right on the local television I’m seeing images of locals being transported to the top of a levee, that wasn’t being overtopped, by one of [inaudible]. And I think you will see a lot of images like that over the next few hours.

AMY GOODMAN: And, Manuel, the Times-Picayune reporting the east bank back levee is overtopped, and the rescue efforts are there for stranded residents. Is that what you’re seeing?

MANUEL ROIG-FRANZIA: It’s very conceivable that that’s what I’m looking at while I’m talking to you, but I can’t—I can’t confirm that. This is not a surprise. During [inaudible] there was what was called the “Cajun flotilla.” This was people from the Cajun parishes of Louisiana who came rushing down to New Orleans, you know, with their pickup trucks, hauling boats on their own, not waiting for anybody to give them permission or to organize them, and simply launching into the lakes that had formed inside the city and conducting their own rescues, at a time when many of the official authorities were still trying to figure out a game plan. It was a pretty extraordinary thing to watch happen. And given the profile of the folks down here, I don’t expect them to wait for anybody’s permission to go get somebody off of their roof or out of their attic.

AMY GOODMAN: Well, Manuel Roig-Franzia, we want to thank you very much for being with us, reporter with the Washington Post, in New Orleans right now covering the storm that is taking place there, Hurricane Isaac. He is also author of The Rise of Marco Rubio and planned to be here in Tampa covering the Republican National Convention but, because of the storm, headed to New Orleans. 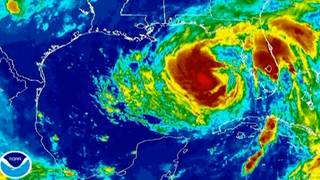