When conservative billionaire David Koch sat down as a member of the New York delegation Thursday night on the floor of the Republican National Convention, Democracy Now! host Amy Goodman attempted to ask him one question: “Mr. Koch, do you think unchecked concentration of wealth will undermine democracy?” While Koch started to answer, the delegates and security around him stood up, one by one, creating a human wall between them. One of those who stood up was Ed Cox, chair of the Republican Party of New York and the son-in-law of President Richard Nixon. Eventually, Goodman was asked to leave due to “security issues” with keeping the walkway clear. [includes rush transcript]

AMY GOODMAN: The issue of money, money in politics. Our job as journalists is to go to where the silence is, and that’s often following the money trail. We try to get into the corporate suites of the Republican and Democratic conventions, go to the streets where the protesters are, and beyond the convention floor. And sometimes all of that converges, like last night. You were protesting on the convention floor. You were protesters from the outside coming inside. In the corporate suites—well, in Sheldon Adelson’s suite, who says he’ll put in $100 million to defeat Obama, we saw Karl Rove sitting with Adelson last night. We saw Newt Gingrich going into a suite. When the Democracy Now! team, Mike Burke and Hany Massoud, went to interview Sheldon Adelson, his daughter seized their camera, tried to take it into their suite. And when they tried to reach for it, she dropped it on the ground. It’s not easy to do this work.

Now, CODEPINK has been protesting money in politics for a long time. Last year there was CODEPINK protest against the Koch, a broad-based protest in Rancho Mirage, where Kochs had gathered conservatives for a conference. And I wanted to discuss the issue of money in politics with David Koch. When Mitt Romney walked down the oil—down the aisle toward the stage on Thursday night, among the people whose hands he shook was the conservative billionaire and major political donor David Koch. Groups in the network of David Koch and his brother Charles intend to spend—and they have been spending, but they say something like $400 million ahead of the 2012 election. David Koch, in fact, was honored yesterday by Americans for Prosperity, a Koch-backed nonprofit that’s been funding anti-Obama ads.

David Koch told the news site Politico, interestingly, yesterday that he disagrees with the Republican Party’s stance on same-sex marriage and believes the United States should consider raising taxes in order to balance the budget.

Well, when David Koch sat down last night as a member of the New York delegation on the convention floor, I went over to talk to him, to ask him a question. He started to answer me, but then the delegates and the security around him stood up one by one, creating a human wall between us. One of those who stood up was Ed Cox. He’s chair of the Republican Party of New York, a son-in-law of President Richard Nixon. Koch and Cox had been seated side by side. So, first you hear my attempt to question David Koch.

DAVID KOCH: I couldn’t quite here you. Sorry, I’m deaf in one ear.

KOCH HANDLER 1: We’re here to listen to the speeches. Thank you so much.

AMY GOODMAN: I know. Let me ask the question again.

KOCH HANDLER 1: No. We’re here to listen to the speeches. Thank you. We’re not here to talk, but to listen. Thank you very much.

EDWARD COX: What we need is a country, led by Mitt Romney, with a vision of an opportunity society of free people and free enterprise. That’s what made this country great, and that’s what he’s going to do, and that’s his vision.

AMY GOODMAN: Are you concerned about, especially young people, looking at what’s happening in the country, where a handful of multi-millionaires and billionaires are so disproportionately determining the democratic process?

EDWARD COX: That’s a statement that isn’t true. This country is governed by the people. That’s what it’s always been based on.

RNC SECURITY 1: Will you keep this moving? One deep.

AMY GOODMAN: Yeah, I will. I will.

AMY GOODMAN: OK, one deep, I got you. Mr. Cox answered a question. Why can’t—why can’t Mr. Koch answer a question? I only have one question.

KOCH HANDLER 2: He’s not going to answer. Get out of here.

KOCH HANDLER 2: Because I [inaudible]. Get out of here. We’re trying to listen to the speech.

AMY GOODMAN: I’m not—do you think media is disrupting the convention? I thought you welcomed press coverage? You know you use the press all the time. I’m asking one question. And you answer the press’s questions.

AMY GOODMAN: I have one question. I asked Mr. Cox—

RNC DELEGATE: And that’s great, and that individual apparently does not want to talk to you, so…

AMY GOODMAN: I don’t know. He can’t even see me, because—

RNC DELEGATE: This is a—this is a security issue, because Mr. Romney is speaking in a couple hours

RNC DELEGATE: So we’d appreciate it if you—

AMY GOODMAN: But this is the press. We’re allowed to ask questions.

AMY GOODMAN: And we’re doing it in a dignified and respectful way.

RNC SECURITY 2: But we do need to clean the—clear this aisle, so you’re going to have to move.

RNC HANDLER 1: The time is not appropriate.

AMY GOODMAN: Basically, this happens all the time at this convention around Mr. Koch, one of the most powerful forces at this convention. When you go up to ask him a question, a group of men stand up all around him and make it impossible—or protect him from the press. These are supposed to be celebrations of democracy, these conventions. There’s a reason why both conventions welcome 15,000 journalists. They want to get their message out. But we are not supposed to be simply stenographers to power. We are there to ask serious questions and to follow the money. This is Democracy Now!, and we’re on the floor of the Republican National Convention. 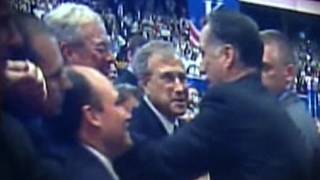