Years ago, University of Nebraska Professor Pete Simi met and interviewed a white power musician who had served in the military specializing in psychological operations. On Sunday, it was that same man — Wade Michael Page — who attacked a Sikh temple in Wisconsin killing six worshipers. Page, who died following the attack from a self-inflicted gunshot wound, was an Army veteran with a long involvement in the neo-Nazi music scene. The military newspaper, Stars and Stripes, reports Page was steeped in white supremacy during his Army days and spouted his racist views on the job as a soldier. We speak to Simi about Page’s politics, the white power music scene and Page’s time in the military. “[Page] started identifying with neo-Nazi beliefs during his time in the military [through] individuals who were active military personnel that were already involved in white supremacist groups,” Simi says. “At the time that I had met him, he felt like his involvement in the [white power] music scene really gave him a lot of purpose in terms of how he could be involved and how he could contribute to the larger white supremacist movement. And, in fact, that’s what the [white power] music scene does.” [includes rush transcript]

AMY GOODMAN: We turn now to the Sikh temple massacre in Oak Creek, Wisconsin, where six worshipers were killed Sunday by Wade Michael Page. He died, following the attack, from a self-inflicted gunshot wound. He was an Army veteran with a long involvement in the neo-Nazi music scene. Page served as a soldier in the Army from 1992 to 1998, when he was discharged for patterns of misconduct. Page worked in psychological operations, or psy-ops. He was stationed at Fort Bliss in Texas and Fort Bragg in North Carolina. The military newspaper Stars and Stripes reports Page was steeped in white supremacy during his Army days and spouted his racist views on the job as a soldier.

Today we begin with a guest who knew Wade Michael Page personally. Pete Simi is a University of Nebraska at Omaha criminology professor who met with Page and talked to him extensively while researching hate music in Southern California. Simi says Page’s military service strongly influenced his neo-Nazi identification, in part because he saw whites in the Army as victims of reverse discrimination. Page reportedly told Simi, “If you don’t go into the military as a racist, you definitely leave as one.” Pete Simi is co-author of the book American Swastika: Inside the White Power Movement’s Hidden Spaces of Hate. He’s joining us now from Omaha, Nebraska.

Professor Simi, welcome to Democracy Now! Tell us how you met Wade Page.

AMY GOODMAN: What was your reaction on Sunday when you first saw the photograph of the man who opened fire on the Sikh temple in Oak Creek, Wisconsin?

PETE SIMI: Actually, I didn’t realize that it was Page until Monday afternoon, fairly late. I wasn’t able to follow media coverage earlier on Monday as details were being released. And I was on the Southern Poverty Law Center’s website reading one of their articles about the tragic incident, and a photo, a side profile of Page, was prominent in that article. And I immediately recognized the photo, and it looked a lot like Page, but at that point I still didn’t, you know, really fully realize who it was. And then, as I read the article, then it really hit me. And, you know, it was a very surreal feeling and, frankly, you know, just kind of sick to my stomach, you know, when I fully realized that this is a person who I had spent fairly extensive time with over the course of close to three years.

AMY GOODMAN: Now, Pete Simi, he grew up—Wade Michael Page grew up in Littleton, Colorado, the, you know, site of the Columbine shootings?

PETE SIMI: Yes, that’s what he had told me.

AMY GOODMAN: Did he talk about being affected by them?

PETE SIMI: Not in particular, no. That was not anything that he—you know, maybe mentioned in passing, but nothing—nothing in particular about Columbine that I remember him really talking about in depth.

PETE SIMI: You know, most of what he talked about in the military wasn’t so much—you know, he did have some favorable things to say as far as he felt like he did get some good training, and there was some—you know, there was some valuable experiences for him based on his time in the military. He talked a little bit about the psych-ops stuff. He didn’t get into too much detail in terms of what he was actually doing. You know, he seemed to value the fact that he received training in terms of weapons and that kind of stuff.

AMY GOODMAN: Who did he hate most?

PETE SIMI: As far as during the time that I knew him, he—I would say it was a pretty even mix between anti-Semitism—he clearly felt that there was a small effort, a small conspiracy of Jews who were out to dominate world affairs, something that’s often referred to as the Zionist occupational government, this idea that this small conspiracy of Jews have literally taken over the United States government and really dominate world affairs. He clearly subscribed to that set of beliefs and, you know, would talk pretty frequently about, you know, Jews do this and Jews control that. And then, you know, a lot of anti-black sentiment. So, between those two, those were the most frequent targets of his kind of hateful beliefs.

AMY GOODMAN: During his time in the military, from ’92 to 1998, there was this famous case at Fort Bragg of a racist soldier who killed this black couple randomly. His name was James Burmeister. Did he ever talk about this?

PETE SIMI: Yeah, when I asked him about Burmeister, he indicated knowing Burmeister. He didn’t seem to suggest that they were close friends, but that they did know each other and that this was somebody he had kind of known more in passing. They weren’t close friends. He did indicate to me that, you know, he did—part of how he kind of started identifying with neo-Nazi beliefs during his time in the military was that he had met individuals who were active military personnel that were already involved in white supremacist groups and, through them, was exposed to white supremacist propaganda or literature, and that, you know, this was a kind of part of his early indoctrination process during his time in the military.

AMY GOODMAN: Did he say he approved of what Burmeister did?

PETE SIMI: He didn’t come out and say, you know, “Oh, this is something, you know, I want to do tomorrow,” or anything like that, but he certainly [inaudible]. He tended to see it as, “Well, what do you expect? You know, this is the kind of stuff” — a lot of times that type of violence will be responded to by individuals involved in these groups kind of—kind of nonchalantly. “Well, this is the kind of stuff that happens when you have a society, you know, that race mixes,” you know, would be something that is often referenced after an incident like that. You know, “This is the fallout. What do you expect?” or, you know, “Whites, you know, are typically the ones that are on—you know, the victims of this kind of violence,” so this kind of turnabout as fair play type of a mentality is also something you hear quite a bit.

AMY GOODMAN: Did he say that racism, white supremacy, was tolerated, was allowed in the military in places like Fort Bragg?

AMY GOODMAN: Pete Simi, we’re going break and come back to this discussion. In addition to Professor Simi, we’ll be joined by Matt Kennard, who particularly is looking at white supremacist movements in the military. Pete Simi is a professor at the University of Nebraska, Omaha, who knew Wade Michael Page from 2000 to 2003. Stay with us. 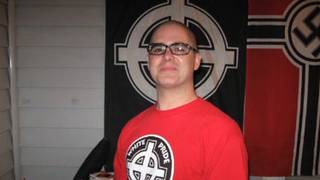