Exposed: U.S. May Have Designated Julian Assange and WikiLeaks an “Enemy of the State”

Documents obtained under the Freedom of Information Act show WikiLeaks founder Julian Assange may have been designated an “enemy of the state” by the United States. U.S. Air Force counterintelligence documents show military personnel who contact WikiLeaks or its supporters may be at risk of being charged with “communicating with the enemy” — a military crime that carries a maximum sentence of death. We speak to attorney Michael Ratner, president emeritus of the Center for Constitutional Rights and a legal adviser to Assange and WikiLeaks. [includes rush transcript]

Michael Ratner, welcome to Democracy Now! Talk about what he said and also this latest information that has come out under Freedom of Information Act that suggests that the U.S. may be looking at Julian Assange as an enemy of the state.

MICHAEL RATNER: Well, Amy, the point that he ended on in the speech you just put up on Democracy Now! was that the Obama administration is taking credit for the Arab Spring. And what he points out is that’s a false view of history, that the Obama administration, both with Tunisia, supported Ben Ali, the, quote, “leader” of Tunisia, or was indifferent to him, to what he was doing to his own people. With regard to Egypt, they supported Mubarak. Hillary Clinton, as he said, called him a great democrat or whatever she said about him. And in fact, of course, it was WikiLeaks that brought out the documents in early December about Tunisia that really showed the corruption of the Ben Ali regime and actually has been given credit by the Tunisian government for helping encourage that Arab Spring. So he tries to correct the record here on the Obama administration somehow putting itself forward as taking credit. But, of course, the people in the Middle East, they know what both the Obama administration did or didn’t do and what has been done for a long time by the United States in the Middle East.

With regard to the—this other issue that was revealed yesterday by WikiLeaks, as well as a number of journalists, the designation—the designation, arguably, that WikiLeaks is an enemy of the United States, and Julian Assange is an enemy, that surfaced in a series of Freedom of Information Act documents, in which an analyst in the U.K., an analyst for the United States, a soldier who had top security clearance, began to be sympathetic with Bradley Manning and WikiLeaks. An investigation is then begun. She visited the trial when Julian Assange was on trial. She met with friends of Julian Assange.

AMY GOODMAN: So this is a woman who has top security clearance, and they start to see she’s going to these meetings and rallies for Julian Assange.

MICHAEL RATNER: Right, and they open an investigation—and we have the documents now—in which they investigate her for communicating with the enemy, which is the same charge, 104-D of the Uniform Code of Military Justice, which carries the death penalty, communicating with the enemy, the same charge that Bradley Manning is actually being tried on. So, from the face of the documents, it appears that WikiLeaks and Julian Assange are looked at as the enemy. If that’s the case, of course, it has serious consequences. We all know what you can do with an enemy. You can drone him. You can capture him. You can put him in a cell forever. So it’s very, very serious. That’s one possibility, or possibly very likely possibility, from reading these documents, that WikiLeaks is an enemy and Julian Assange is an enemy.

The other possibility is that WikiLeaks is the means by which this military analyst is communicating with the enemy. She’s turning over documents. She never did, but she’s allegedly possibly going to turn over documents to WikiLeaks, which then, by doing that, she’s communicating with the enemy, because WikiLeaks is going to publish them, and al-Qaeda or somebody who the U.S. has already designated an enemy is going to read them. Either possibility is terrible for Julian Assange and WikiLeaks and, of course, for journalists. It’s terrible because if WikiLeaks is an enemy—I’ve already said how serious that would be if Julian Assange and WikiLeaks are an enemy—if they’re the means of communicating with the enemy, they could still be charged—WikiLeaks could be charged—with aiding the enemy, could be arrested under the National Defense Authorization Act, could be kept at Guantánamo, etc.

MICHAEL RATNER: Right. Enemy is al-Qaeda and Taliban. And the question in this document—either answer is very bad for Julian Assange and WikiLeaks—is, is he being looked at like al-Qaeda or the Taliban, or is he simply—not simply—or is he being looked at as the means by which someone like this analyst is communicating with the enemy?

AMY GOODMAN: In these last seconds, where does his case stand? He’s now been in the Ecuadorean embassy in London, holed up there for a hundred days. What’s happening?

MICHAEL RATNER: Well, the foreign minister gave a talk with Julian yesterday at the U.N. and said, “We will never, ever surrender Julian Assange.” He has been given asylum, and now the demand is that the U.K. give safe passage to Julian Assange to Ecuador. That’s required by law. And today, the Ecuadorean minister said he is meeting with his U.K. correspondent at the U.N. and will really make the request, demand, that Julian Assange be given safe passage. He also said that they made every effort to get guarantees that Julian Assange would not be forwarded from Sweden to the United States for prosecution.

AMY GOODMAN: You mean that they would give him up to be questioned by Sweden. Their concern is him being sent to the United States.

MICHAEL RATNER: Right, that’s their major concern. And the U.K. and Sweden did not do that, refused to do that. And the United States refused to answer the question of whether or not they would prosecute Julian Assange.

That does it for our broadcast. We’re on the 100-city tour. Tonight I’ll be in Arlington, Virginia, at George Mason University Founder’s Hall, Room 125, at 7:30; Friday night in Charlottesville, Virginia, 7:00 p.m. at Nau Auditorium South Lawn Commons, University of Virginia; on Saturday at 1:00 p.m. at the Green Fest in Washington, D.C.; the Baltimore Book Festival at 7:00 p.m. on Saturday; Sunday noon inRichmond, Virginia; 7:00 p.m. in Norfolk, Virginia; wrapping up our Virginia leg of the tour at Virginia Tech in Blacksburg on Monday night, before heading to Denver, and then we’ll be traveling through Colorado. Check our website at tour.democracynow.org. 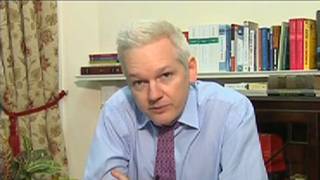