Speaking via videolink from the Ecuadorean embassy in London, WikiLeaks founder Julian Assange addressed a side meeting of the U.N. General Assembly on Wednesday evening. In his remarks, Assange gave thanks to the United Nations for its treaties on political asylum and denounced the U.S. treatment of alleged Army whistleblower Bradley Manning. Assange also accused President Obama of exploiting the Arab Spring and called on the U.S.to end its persecution of WikiLeaks and its supporters. We air Assange’s address. [includes rush transcript]

AMY GOODMAN: Documents obtained under the Freedom of Information Act show WikiLeaks founder Julian Assange may have been designated an “enemy of the state” by the United States. U.S. Air Force counterintelligence documents show military personnel who contact WikiLeaks or its supporters may be at risk of being charged with “communicating with the enemy,” a military crime that carries a maximum sentence of death. The designation is the same legal category as al-Qaeda and the Taliban.

The report came just before Julian Assange spoke via videolink to a side meeting of the U.N. General Assembly on Wednesday. Assange spoke from inside the Ecuadorean embassy in London. Ecuador granted him diplomatic asylum to prevent Assange from being extradited to Sweden over sex crime accusations. Assange is seeking asylum because he fears extradition to Sweden may lead to his transfer to the United States, where, he is concerned, he could potentially face charges relating to WikiLeaks.

JULIAN ASSANGE: Today I want to tell you an American story. I want to tell you the story of a young American soldier in Iraq. The soldier was born in Crescent, Oklahoma, to a Welsh mother and to a U.S. Navy father. His parents fell in love. His father was stationed at the U.S. military base in Wales. The soldier showed early promise as a boy, winning top prizes at science fairs three years in a row. He believed in the truth, and like all of us, he hated hypocrisy. He believed in liberty and the right for all of us to pursue it and happiness. He believed in the values that founded an independent United States. He believed in Madison, he believed in Jefferson, and he believed in Paine. Like many teenagers, he was unsure what to do with his life, but he knew he wanted to defend his country, and he knew he wanted to learn about the world.

He entered the U.S. military and, like his father, trained as an intelligence analyst. In late 2009, age 21, he was deployed to Iraq. There, it is alleged, he saw a U.S. military that did not often follow the rule of law and, in fact, engaged in murder and supported political corruption. It is alleged it was there, in Baghdad, in 2010 that he gave to WikiLeaks, he gave to me, and, it is alleged, he gave to the world, details that exposed the torture of Iraqis, the murder of journalists and the detailed records of over 120,000 civilian killings in Iraq and in Afghanistan. He is also alleged to have given WikiLeaks 251,000 U.S. diplomatic cables, which then went on to help trigger the Arab Spring. This young soldier’s name is Bradley Manning.

Allegedly betrayed by an informer, he was then imprisoned in Baghdad, imprisoned in Kuwait, and imprisoned in Virginia, where he was kept for nine months in isolation and subject to severe abuse. The U.N. special rapporteur for torture, Juan Méndez, investigated and formally found against the United States. Hillary Clinton’s spokesman resigned. Bradley Manning, science fair all-star, soldier and patriot, was degraded, abused and psychologically tortured by his own government. He was charged with a death penalty offense. These things happened to him, as the U.S. government tried to break him, to force him to testify against WikiLeaks and me. As of today, Bradley Manning has been detained without trial for 856 days. The legal maximum in the U.S. military is 120 days.

We should not underestimate the scale of the investigation which has happened into WikiLeaks. I only wish I could say that Bradley Manning was the only victim of the situation. But the assault on WikiLeaks in relation to that matter and others has produced an investigation that Australian diplomats say is without precedence in its scale and nature, that the U.S. government called a “whole of government investigation.” Those government agencies identified so far, as a matter of public record, having been involved in this investigation include the Department of Defense; CENTCOM; SOUTHCOM; the Defence Intelligence Agency; the U.S. Army Criminal Investigation Division; the United States forces in Iraq; the First Armored Division; the U.S. Army Computer Crimes Investigative Unit, the CCIU; the Second Army Cyber Command; and within that three separate intelligence investigations, the Department of Justice, most significantly, and its U.S. grand jury in Alexandria, Virginia; the Federal Bureau of Investigation, which now has, according to court testimony early this year produced a file of 42,135 pages into WikiLeaks, of which less than 8,000 concern Bradley Manning; the Department of State; the Department of State’s Diplomatic Security Services. In addition, we have been investigated by the Office of the Director General of National Intelligence, the ODNI; the Office of the National Counterintelligence Executive; the Central Intelligence Agency; the House Oversight Committee; the National Security Staff Interagency Committee; and the PIAB, the President’s Intelligence—the President’s Intelligence Advisory Board. The Department of Justice spokesperson, Dean Boyd, confirmed in July 2012 that the Department of Justice investigation into WikiLeaks is ongoing. So, for all Barack Obama’s fine words yesterday—and there were many of them, fine words—it is his administration that boasts on his campaign website of criminalizing more speech than all previous presidents combined.

Who can say that it is not audacious that the president, concerned to appear to look leaderly, looks back on this change, the people’s change, and tries to call it his own? But we can take heart here, too, because it means that the White House has seen that this progress is inevitable. In this season of progress, the president has seen which way the wind is blowing. And he must now pretend that it’s his administration who made it blow.

Exposed: U.S. May Have Designated Julian Assange and WikiLeaks an “Enemy of the State”

NEXTExposed: U.S. May Have Designated Julian Assange and WikiLeaks an “Enemy of the State” 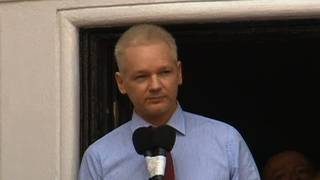