Two years ago, thousands of Egyptians filled Tahrir Square sparking the revolution that brought down dictator Hosni Mubarak. We go to Cairo to speak with Democracy Now! correspondent Sharif Abdel Kouddous, who joins us live from a protest march back to Tahrir. “You hear many of the same chants that we heard two years ago — 'Bread, freedom and social justice' — and for the downfall of the regime, that they see has continued two years after Mubarak’s ouster,” Kouddous says. “The difference between what’s happening now and what’s happened two years ago is that there’s a lot less unity, and we’re seeing a much more polarized country.” [includes rush transcript]

Egyptian youth activists have called for large rallies today to mark the second anniversary of the start of the revolution that ended Hosni Mubarak’s three-decade reign. Inspired by the uprising in Tunisia, tens of thousands of Egyptians took to the streets on January 25th, 2011. Over the following 18 days, the protests grew across Egypt despite a violent crackdown.

While Mubarak resigned on February 11th, the uprising is an unfinished revolution for many Egyptians. The Egyptian military took control, and in the first seven months nearly 12,000 civilians were tried in military courts—more than the total number during the past three decades under Mubarak. Then, last June, the country held an election that brought Mohamed Morsi of the Muslim Brotherhood to power.

On Thursday, protesters held a day-long demonstration that was broken up by Egyptian security forces firing tear gas, leaving at least a dozen injured. Clashes began before dawn in downtown Cairo when protesters tried to tear down a cement wall built to prevent them from reaching the Parliament and the Cabinet building. Opposition forces are calling upon President Morsi to fulfill the goals of the January 25th uprising: bread, freedom and social justice. This is demonstrator Ayman Mahmoud.

AYMAN MAHMOUD: [translated] My expectation is that there will be a clash between an Islamic force and a civil force. It will happen. And this clash will be stronger than the previous ones, because they have their own thoughts, and ours are different. It is normal that two opposing forces clash, and this time will be the strongest.

AMY GOODMAN: At a news conference on Tuesday, the Muslim Brotherhood’s Freedom and Justice Party said Egypt has many things to celebrate as it marks the second anniversary of the uprising.

We go now directly to the streets of Cairo, where we’re joined by Democracy Now! correspondent Sharif Abdel Kouddous on a march to Tahrir.

Sharif, tell us what’s happening in leading up to today, the second anniversary of the uprising.

SHARIF ABDEL KOUDDOUS: Well, Amy, there are thousands that have taken to the streets, not just in Cairo, but across Egypt—in Alexandria and Suez and in cities across the Delta—for a turnout to protest today on the second anniversary of the revolution. The protesters—you hear many of the same chants that we heard two years ago — “Bread, freedom and social justice” — and for the downfall of the regime, that they see has continued two years after Mubarak’s ouster.

But the difference between what’s happening now and what’s happened two years ago is that there’s a lot less unity, and we’re seeing a much more polarized country. Most notably, the Muslim Brotherhood, the largest and most powerful political force with—where Mohamed Morsi, the president, is a member of, are not attending the protests today, and instead are—have created a months-long campaign called “Rebuilding Egypt,” where they’re engaging in charity work, delivering medical care, rebuilding schools, [inaudible] holding big flea markets where they’re selling goods at wholesale prices. So, you know, this is a pattern of what people say of—you know, charity work as social justice, but really masking the deep, deep economic problems that are plaguing Egypt right now under a mismanaged economy where the poor are bearing the brunt of the troubles of the economy. And the Muslim Brotherhood and Mohamed Morsi are set to engage in an austerity program, where people will see rising prices of basic staple goods, there will be tax hikes and cuts in subsidies. So, this is what many criticize and why many are protesting today, what they say is the Brotherhoodization of the state. And they’re saying that the Brotherhood has abandoned the goals of the revolution for its own political gain. And there’s a sense that instead of trying to really reform the state, that the Muslim Brotherhood are instead trying to take it over, so that we’ve just switched from Mubarak to Morsi. And so, that’s what the main calls are for in this protest today.

Many are also calling for accountability and justice and retribution for the many hundreds of protesters that have been killed, the many thousands more that have been wounded. To date, only two policemen, two low-ranking policemen, are in prison for the killing of hundreds of protesters in the revolution. People see that there’s no justice and accountability, that the police continue to act with impunity.

And we’re seeing clashes actually break out right now in Alexandria and on the outskirts of Tahrir. It remains to be seen whether this is going to escalate or not.

But I think the main crux of today’s protest is directed not only at the Brotherhood, but at the remnants of the state, that this regime, the state bureaucracy, has not changed at all. And rather than feel empowered by the revolution, many people are wary two years later, after having seen no change in the basic economic demand, no change in their rights. And so, you know, many are saying the revolution continues and that the Brotherhood, who were the victims of the state abuse during Mubarak, you know, have stepped out of the margins and have sacrificed those left behind, where the marginalized are still those targeted by state abuse.

AMY GOODMAN: Sharif Abdel Kouddous, Democracy Now! correspondent, speaking to us from the streets of Cairo on the second anniversary of the Egyptian revolution. And I have to say, I remember so distinctly two years ago. Sharif was here with us at Sundance when the developments were taking place. He hopped on the next plane, raced to New York to pick up his passport, and headed home to Egypt, where he has done remarkable reporting for the last two years and continues to live and work now in Cairo. 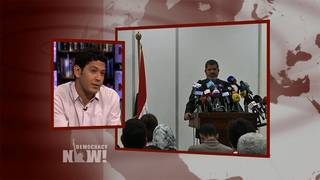