4 Years After Vow to Close Gitmo, Why Has Obama Signed NDAA Bill Barring Transfer of Its Prisoners?

Four years after vowing to close Guantánamo and 11 years after it opened, President Obama has signed the National Defense Authorization Act, barring the use of federal funds to transfer detainees from the notorious prison to U.S. soil. Of the 166 prisoners remaining at Guantánamo, 86 have been cleared for release. Obama says he signed the NDAA’s renewal despite his objections to the Guantánamo provisions and maintained in a signing statement the right to override them, but Baher Azmy, legal director for the Center for Constitutional Rights, says Obama’s avowal amounts to no more than a “press release.” [includes rush transcript]

StorySep 18, 2012From Guantánamo to NDAA: Obama Admin Bids to Preserve Indefinite Detention at Home and Abroad

AMY GOODMAN: Efforts to close the U.S. military prison at Guantánamo Bay were dealt another setback last week when President Obama signed the National Defense Authorization Act, or NDAA. The bill bars the use of federal funds to transfer Guantánamo prisoners to U.S. soil, even for a criminal trial. It also includes restrictions on the executive branch’s authority to transfer detainees to a foreign country.

President Obama says he signed the NDAA’s renewal despite his objections to the Guantánamo provisions. In a signing statement, he said the president has constitutional power to override these restrictions. He made a similar claim when he signed last year’s version of the bill but has still not delivered on promises to close Guantánamo.

It was four years ago this month, just after his first inauguration in 2009, that President Obama vowed to close the prison no more than a year later.

PRESIDENT BARACK OBAMA: In order to effect the appropriate disposition of individuals currently detained by the Department of Defense at Guantánamo and promptly to close the detention facility at Guantánamo consistent with the national security and foreign policy interests of the United States and the interest of justice, I hereby order. And we then provide the process whereby Guantánamo will be closed no later than one year from now.

AMY GOODMAN: Four years later, 166 men remain locked up at the prison; 86 of them have been cleared for release, but they haven’t been. This week marks the 11th anniversary of the arrival of the first prisoners at Guantánamo Bay. All of this comes as President Obama nominates counterterrorism adviser John Brennan to head the CIA. Brennan withdrew from consideration for the same job in 2008 amidst protests over his role at the CIA under George W. Bush. Brennan had publicly supported the CIA’s policies of so-called “enhanced interrogation techniques” and extraordinary rendition.

For more, we go to Baher Azmy, legal director for the Center for Constitutional Rights.

Welcome back to Democracy Now!, Baher. Talk about the significance of this, the four-year anniversary of President Obama saying he’d close Guantánamo, the 11th anniversary of the opening of Guantánamo.

BAHER AZMY: Yeah, they’re two grim markers. For 166 men, this represents 11 years of hopeless, brutal detention without realistic prospect of charge, thousands of miles away from families, and—and is, for a great number of men, producing the sort of expected debilitating psychological and physical effects of indefinite detention.

AMY GOODMAN: Eighty-six of these men have been cleared for release, but they continue to be held?

BAHER AZMY: Precisely. So, the Guantánamo task force that Obama initiated as part of this first-year executive order brought together all of the relevant agencies to evaluate the detainees—Defense, State, CIA, NSA—and determined that a certain number of them, unanimously, should be cleared from Guantánamo. And 86 of those individuals remain—that is, with a conclusion that they are no threat to the United States or the allies. And so, it is a particularly grotesque moral failure to continue to detain people the jailer itself believes should no longer be detained.

AMY GOODMAN: Obama’s signing statement casts the restrictions, like forbidding federal trials for Guantánamo captives, as an encroachment on executive powers. He said the law he signed, quote, “substitutes the Congress’s blanket political determination for careful and fact-based determinations, made by counterterrorism and law enforcement professionals, of when and where to prosecute Guantánamo detainees. Removing that tool from the executive branch undermines our national security. Moreover, this provision would, under certain circumstances, violate constitutional separation of powers principles.” What does a signing statement mean? He still signed the bill.

BAHER AZMY: Precisely. I mean, put in this way, it’s little more than a press release. And these arguments have merit, but they should have been acted on in the form of a veto, which he threatened to do last year and failed to do, and threatened again to do this year and failed to do. And it’s just another example of a failure of his political will to take concrete steps to act on his promise to close Guantánamo.

AMY GOODMAN: Talk about the reauthorization of the NDAA, the National Defense Authorization Act, overall.

BAHER AZMY: So, it’s a Defense Department funding bill, which I think—which includes restrictions on the ability of the president to try people in the United States or transfer them to foreign countries. And the most problematic provisions with respect to closing Guantánamo are restrictions on the ability of the president to transfer, for example, these 86 cleared men either to their home countries or to third countries ready and willing to take them. And they include some provisions that will allow the president to certify that someone should be transferred home anyway, but like his failure to veto the bill, in the past year, his failure—he has failed to act on that limited authorization to clear—to return people who have been cleared.

AMY GOODMAN: The significance of John Brennan being nominated to be head of the CIA? When President Obama was about to do that the first time, there was an outcry. At the time, he withdrew from consideration for the same job amidst protests over his role at the CIA under George W. Bush, publicly supporting the CIA’s policies of so-called “enhanced interrogation techniques,” which others call torture, and extraordinary rendition. What has changed, except that we’ve moved from a Republican president, George Bush, to a Democratic president?

BAHER AZMY: Little or anything has changed. And what’s perhaps most—one of the most depressing things about this nomination is that, ultimately, we shouldn’t be surprised, because in so many areas Obama has fully embraced the Bush policies that he so seriously criticized. And the nomination of Brennan to the head of the CIA is a sort of insult to—adds insult to injury. The original injury was Obama’s statement and—or policy that he would not investigate seriously allegations of criminality of high-level Bush officials for torture—

BAHER AZMY: His colleagues, and even predecessors. So that was—that was, at one pass, a serious problem. But now to nominate to the head of the agency the person partly responsible for these activities not only looks forward, but is a very clear signal that he’s embraced and sort of immunized individuals for their past misconduct.

AMY GOODMAN: For the rest of the broadcast, we’re going to bring our audience an extended interview with Sami al-Hajj, the first time in the United States, only journalist held at Guantánamo, held by the U.S. military for more than six years, picked up by the Pakistanis in December of 2001, then brought to Kandahar, then brought to Bagram, tortured, brought to Guantánamo, where he was held year after year. Can you talk about the significance of his case?

BAHER AZMY: Yeah. Well, it’s important that you’re talking to him, because I think he speaks very eloquently for the—what many hundreds of other detainees suffered, who cannot tell their story. And so, he will speak very well about what he endured, but the listeners should note that this was, in a way, not an exceptional case. Setting aside the likelihood that his detention was vindictive, because he was an Al Jazeera reporter, but the brutality he suffered in Afghanistan, the fact that he was turned over for political reasons or for a bounty, the arbitrariness of his detention in Guantánamo and the brutality of his treatment there, has been—is a story that can be replicated hundreds of times, people who have quieter and less eloquent voices than his own.

AMY GOODMAN: How do you think this story will change? I mean, still, 166 men held at Guantánamo. What will happen? They stay there until they die?

BAHER AZMY: That—well, and, you know, the grim reality is, more people under the Obama administration have died in recent years than have been charged or tried criminally. And Obama has offered no realistic prospects for taking either practical steps to release individual people who should be released or ending this really odious paradigm of indefinite detention.

AMY GOODMAN: Baher Azmy, I want to thank you for being with us, legal director for the Center for Constitutional Rights. When we come back, a Democracy Now! exclusive: the extended broadcast interview with the Al Jazeera journalist Sami al-Hajj, held for more than six years by the U.S. military, the vast majority of that time at Guantánamo. Stay with us. 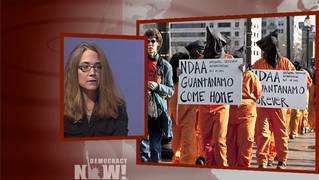 From Guantánamo to NDAA: Obama Admin Bids to Preserve Indefinite Detention at Home and Abroad