One year after Superstorm Sandy, many of those impacted by the storm remain without a permanent home and dependent on diminishing relief funds. New York Magazine reports at least 22,000 households are still displaced. We are joined by two guests: Shawn Little, a healthcare worker who has been living in hotels with her family since Sandy devastated their neighborhood in the Rockaways section of Queens, and Judith Goldiner, attorney in charge of the Civil Law Reform Unit at the Legal Aid Society.

AMY GOODMAN: As we continue our coverage of the first anniversary of Superstorm Sandy, many of those impacted by the storm remain homeless and dependent on diminishing relief funds. New York Magazine reports at least 22,000 households are still displaced.

Joining us here in our New York studio, which a year ago there was no power here or anywhere else — in fact, Democracy Now! — I was on the road on a hundred-city tour. We were in St. Louis—all the media was watching St. Louis yesterday for the Red Sox-Cardinals game. Red Sox won, but that wasn’t what was important a year ago. So, as I was broadcasting from a St. Louis PBS station, my colleagues here in New York were going out to the Rockaways, to Brooklyn, to Queens, to Staten Island, to the Lower East Side, because the whole area was devastated.

We’re joined here by Shawn Little, a healthcare worker who lived in the Rockaways section of Queens when Sandy hit. She and her family have been living in hotels for the past year. We’re also joined by Judith Goldiner, attorney in charge of the Civil Law Reform Unit at the Legal Aid Society.

We welcome you both to Democracy Now! Judith, let’s begin with you. Give us the overall picture of housing today a year after Superstorm Sandy.

JUDITH GOLDINER: Well, unfortunately, what we saw with Superstorm Sandy is it destroyed a whole area of low-income housing for people that has not been replaced. And in fact, the housing that’s been rebuilt in places like the Rockaways is now unaffordable to a lot of people who used to live there. So what we’ve seen is losing this category of housing and not rebuilding so that people who lived there can afford to go back.

We at Legal Aid have been representing people who were homeless and in the hotels for—you know, really since the storm, and trying to make sure that they at least are going to get permanent, affordable housing. But really, the bigger picture is that so many people still don’t have housing, are marginally housed, are doubled up, are in hotels, and we don’t have good options for them.

AMY GOODMAN: What do you mean that the—some—many houses were wiped out, and then they—how was it set up? How was the building done so that people with lower incomes could not go back?

JUDITH GOLDINER: Well, many times people who were able to rebuild rebuilt and started charging more rent than people could afford for those apartments. Some apartments weren’t rebuilt, and there was many less options, especially in places like Far Rockaway. And we’ve been hearing over and over how people are seeing rents that are far, far higher than they ever were. And remember, Far Rockaway was a place where there was affordable housing. It’s pretty far away from Manhattan. It takes a long time to get there. And as a result, many of my clients could actually find places to live there. And that’s not the case anymore.

AMY GOODMAN: Shawn Little, explain what happened to you. Where were you a year ago, before Superstorm Sandy?

SHAWN LITTLE: A year ago today, I was home. I was home in Rockaways, Auburn.

AMY GOODMAN: And what happened when the storm hit? You had had Irene, but nothing really had happened.

SHAWN LITTLE: We had Irene, and nothing happened. So, basically, we was unprepared, because we figured it was the same, it was going to be the same. So, Irene, I, you know, was ready and prepared, but nothing happened. So Sandy just took us back. We wasn’t prepared, and we didn’t prepare for anything. So we was there. And we evacuated eventually, you know, and we ended up in a gym, gymnasium, in Kew Gardens.

AMY GOODMAN: For about 10 days or so?

AMY GOODMAN: And then where did they put you?

AMY GOODMAN: And what hotels were they putting you in? And for people who have kids, their kids are supposed to be in school. I mean, that’s—

SHAWN LITTLE: Sure, sure. Well, people—you know, people was traveling. They was back and forth, you know, to the Rockaways, to different parts of Queens. They offered different schools to place the kids in, you know, if you rathered that. My son was not able to go back to school, because his school was in the Rockaways.

AMY GOODMAN: How old is he?

SHAWN LITTLE: He’s 15 now. He was 14 then. So, he went to Beach Channel, and—there on the bay in the Rockaways, Rockaway Park. So he was out of his school for like four months.

AMY GOODMAN: And you’re still in a hotel today?

SHAWN LITTLE: Yes. I’m in a different hotel, actually. We just relocated to Brooklyn from Manhattan, which is a blessing. It’s OK. I’m here.

AMY GOODMAN: And how are—how do you get out of a hotel and actually live in an apartment or a home?

SHAWN LITTLE: Well, now I’m getting ready to relocate, actually. I’ll be moving in my new place in a few weeks or so, through the grace of—Legal Aid helped us out. DHS helped us out.

AMY GOODMAN: You have an autistic foster child?

SHAWN LITTLE: Right, I do.

AMY GOODMAN: How did he bear this?

SHAWN LITTLE: Well, as long as he was with me, he was fine. You know, anything other probably would have set him back. You know, he came a long way. And, you know, to keep him where he is today, as long as he’s with his family—you know, me, myself—me, my son, my daughter, that’s all he knows. So, he’s doing great.

AMY GOODMAN: So, Judith Goldiner, how typical is this, a year later people still living in hotels?

JUDITH GOLDINER: Well, we are still working with 80 households, about 150 people who are still in the hotels. Unfortunately, the city has not moved quickly to give many of those people the housing assistance that they need in order to move in. You know, we worked very hard with Ms. Little, and we were able to get her a housing coupon, but there are many others for whom the city has not acted yet. And despite our efforts, they’re still slow. And it’s really concerning to us.

JUDITH GOLDINER: Right. There are 80 people still in the hotels. There are 22,000 people—

JUDITH GOLDINER: Right, 22,000 households who are still doubled up, tripled up, living in substandard conditions. Absolutely. There are so many people like that. And there’s been so little effort to make more housing available to them.

AMY GOODMAN: What do you think is the most important issue for people to understand right now?

AMY GOODMAN: Do you foresee being able to move into—back into an apartment or in a house, Shawn?

SHAWN LITTLE: Sure. Yeah, absolutely, as long as I’m comfortable, I basically have what I was used to, I’m fine. You know, there was times where they tried to place us in, you know, places that we wasn’t used to, you know, we didn’t come from. You know, I’ve worked hard to get my family in a middle-class home. I had no program, no public assistance. And to just lose that and go somewhere that we’re not used to would have been really, really hard, you know.

AMY GOODMAN: We’re going to have to leave it there, but we will certainly continue to follow this. Judith Goldiner, attorney at Legal Aid Society; Shawn Little, displaced from her home in Rockaways when Hurricane Sandy hit a year ago today. 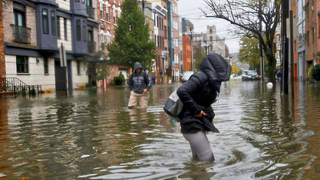