Democracy Now! was on the scene this morning when dozens of protesters held an International Human Rights Day Immigration Vigil outside Elizabeth Detention Center in New Jersey. In a dramatic civil disobedience action, eight protesters were arrested after chaining themselves outside the facility in order to show solidarity with detainees and families separated by deportations. The vigil was part of a national campaign to urge President Obama and Congress to pass immigration reform and end deportation quotas. The U.S. has deported over 1.5 million people under the Obama administration, and roughly 1,000 people continue to be scheduled for deportation each day. This piece was produced by Democracy Now! multimedia fellow Cassandra Lizaire.

Meanwhile in Texas, today an activist with the National Immigrant Youth Alliance who infiltrated the El Paso Detention Center in Texas spoke to Democracy Now!’s Renée Feltz about the nearly 800 people held at the facility — including six pregnant women. Dozens have been paroled based on “credible fear” asylum claims, but continue to be detained. Click here to listen to the interview.

Last week, Democracy Now! spoke by phone with a detainee at the same facility named Kumar, who said some protesting detainees had planned to go on a hunger strike but changed their mind after guards threatened to put them in solitary confinement.

Some demonstrators claim they have been held more than a year pending their deportation, while others say they are still being detained even though their asylum bids have been approved. The group DreamActivist has launched a petition calling for a full review of the facility.

Click here to see all of our immigration coverage.

MONICA AGUILAR CALDERÓN: We’re here today on the International Human Rights Day in front of the private detention center in Elizabeth, New Jersey. We’re here to let our brothers and sisters who are in detention know that they’re not alone.

NADIA MARIN-MOLINA: There are many immigrants from the New York area who are processed through the New Jersey detention center, so this is one of—one of the central processing areas is through New Jersey, and so it was very important to do an action here.

NADIA MARIN-MOLINA: It’s also an action in solidarity with all of the other actions in different parts of the country. There have been Not One More actions in—across the country—in Arizona, in California, in Chicago. And the community here in New Jersey wanted to stand in solidarity with their brothers and sisters across the country and say that it’s time for President Obama to stop the deportations. President Obama can do it with the stroke of a pen, can change the lives of millions of immigrants, but hasn’t done it yet.

NADIA MARIN-MOLINA: There was a group of eight protesters from the community here in New Jersey, from different community organizations, who were arrested blocking the street right in front of this detention center here in Elizabeth, New Jersey.

MONICA AGUILAR CALDERÓN: I saw a group of brave community people who said, “Not one more deportation,” who wanted to make a point to show everybody that we are supporting the people who are being deported, the families that are being taken apart by this unjust laws. 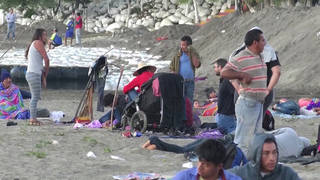