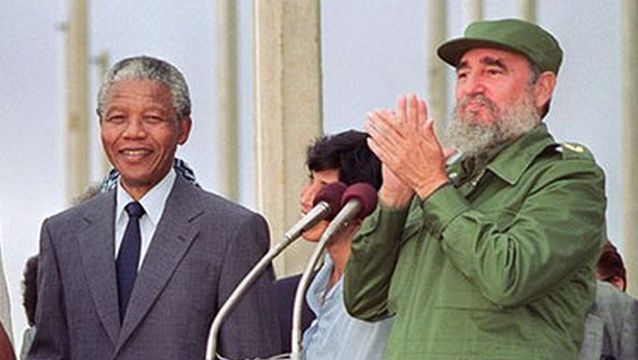 In 1991, Nelson Mandela traveled to Cuba to thank Fidel Castro and the Cuban people for supporting the fight against apartheid and colonialism in southern Africa. “The decisive defeat of the aggressive apartheid forces [in Angola] destroyed the myth of the invincibility of the white oppressor,” Mandela said. “The defeat of the apartheid army served as an inspiration to the struggling people of South Africa.” Below are excerpts from the speech:

NELSON MANDELA: We have come here today recognizing our great debt to the Cuban people. What other country has such a history of selfless behavior as Cuba has shown for the people of Africa? How many countries benefit from Cuban health care professionals and educators? How many of these volunteers are now in Africa? What country has ever needed help from Cuba and has not received it? How many countries threatened by imperialism or fighting for their freedom have been able to count on the support of Cuba?

I was still in prison when I first heard of the massive help which the Cuban international forces were giving to the people of Angola. The help was of such a scale that it was difficult for us to believe it, when the Angolans were under attack by the combined forces of South Africa, the FALA [Armed Forces for the Liberation of Angola] who were financed by the CIA, mercenaries, UNITA [National Union for the Total Independence of Angola], and Zaire in 1975.

In Africa we are used to being victims of countries that want to take from us our territory or overthrow our sovereignty. In African history there is not another instance where another people has stood up for one of ours. We also acknowledge that the action was carried out by the masses in Cuba and that those who fought and died in Angola are only a small portion of those who volunteered to go. To the Cuban people internationalism is not only a word but something which they have put into practice for the benefit of large sectors of mankind. We know that the Cuban forces were ready to retreat after driving back the invasion in 1975 but the continued aggressions of Pretoria did not allow them to do so. Your presence there and the reinforcements sent for the battle of Cuito Cuanavale has a historical meaning. The decisive defeat of the racist army in Cuito Cuanavale was a victory for all Africa. This victory in Cuito Cuanavale is what made it possible for Angola to enjoy peace and establish its
own sovereignty. The defeat of the racist army made it possible for the people of Namibia to achieve their independence.

Apartheid is not something that started yesterday. The origins of the racist white domination go back three and a half centuries from the moment that the first white colonizers began the process of division and eventual defeat of the Khoi-Khoi, the San, and other African peoples, the original inhabitants of our country. This process of conquest, from its beginning, engendered a series of resistance wars which are the origin of our national liberation struggle. Fighting under great disadvantages, the African peoples tried to defend their lands, but the material base and the firepower of the colonial aggressors led the divided kingdoms and tribal chiefs to defeat. This tradition of resistance is still alive and serves as an inspiration to our current struggle…

The formation of the ANC was the first step in the creation of a new South African nation. With time, this concept developed until it found, 36 years ago, clear expression in the Freedom Charter where its says that South Africa belongs to all who live there, blacks as well as whites. This constituted both an unequivocable rejection to the racist state and the affirmation of the only alternative that is acceptable: that racism and its structures be, finally, abolished.

It is well known that the response of the state to our legitimate democratic demands was, among others, to accuse our directors of treason and subject our people during the 1970’s to indiscriminate massacres. These facts, and the banning of our organization, left us no other road than the one followed by any self-respecting people, including Cuba, that is, to rise up in an armed struggle to retake our country from the hands of the racists.

I should mention that when we wanted to take up arms, we approached numerous Western governments in search of help and we could only talk with the lowest level officials. When we visited Cuba we were received by the highest authorities who immediately offered anything we wanted and needed.

That was our first experience with Cuban internationalism. Even though we took up arms, it was not our preferred option. It was the apartheid regime that forced us to take up arms. Our preferred option has always been to find a peaceful solution to the apartheid conflict. The combined struggle of our people in the country, as well as the growing international battle against apartheid during the 1980’s made possible a negotiated solution to that conflict. The decisive defeat in Cuito Cuanavale changed the status of forces in the region and reduced considerably the capacity of the Pretoria regime to destabilize its neighbors … within the country

It is in this context that we value our friendship with Cuba very, very much. When you, Comrade Fidel, yesterday said that our cause is your cause, I know that that sentiment came from the bottom of your heart and that that is the feeling of all of the people of revolutionary Cuba. [applause]

The transcript of the full speech can be read here.