“There is a War on Journalism”: Jeremy Scahill on NSA Leaks & New Investigative Reporting Venture

Six months ago today, Glenn Greenwald published his first article about Edward Snowden’s leaks from the National Security Agency in The Guardian newspaper. British police are now examining whether Guardian staff should be investigated for terrorism offenses over their handling of data leaked by Snowden. Jeremy Scahill talks about the “war on journalism” around the world and his work to launch a new media venture with Greenwald, filmmaker Laura Poitras and eBay founder Pierre Omidyar.

JUAN GONZÁLEZ: Jeremy, I also wanted to ask you about Edward Snowden. Six months ago, Glenn Greenwald published his first piece about Snowden’s NSA leaks in The Guardian newspaper. I want to turn to a clip of Alan Rusbridger, editor of The Guardian newspaper, who appeared before a British parliamentary hearing on Tuesday to face questions on the publication of material leaked by Snowden. Committee Chair Keith Vaz asked Rusbridger about how much of the material The Guardian has chosen to publish so far.

ALAN RUSBRIDGER: It’s approximately correct. So, we have—I mean, we continue to publish stuff, but it’s about 1 percent of what we were given.

KEITH VAZ: As far as I can see, you have had 58,000 files. So you’re telling this committee that only 1 percent of the information in those files has now gone public?

JUAN GONZÁLEZ: Later in the hearing, Alan Rusbridger elaborated on the standards he used when deciding how much of Snowden’s leaked material to publish.

ALAN RUSBRIDGER: It’s harm versus good. It’s authority. It’s proportionality—you know, 1 percent, not all of it—and it’s no fishing expedition. So, one of the things I said to the reporters right at the beginning of this is we’re not going to use this as a bran tub for stories. There is stuff in there about Iraq, Afghanistan; we’re not even going to look at it. That’s not what Edward Snowden was doing when he wanted journalists, responsible journalists, to go through this material.

JUAN GONZÁLEZ: Jeremy, your response to the Rusbridger testimony?

JEREMY SCAHILL: I was—I actually was just in London meeting with Alan and, you know, the other editors at The Guardian. And, you know, there is a war on journalism right now. And in some countries, like Mexico, it comes in the form of journalists being assassinated on an almost weekly basis by narco-cartels or people that have links to the Mexican security forces. In Somalia, journalists are killed—being killed in record numbers. There are a couple of dozen journalists missing right now in Syria. And then, in Western societies, you have, on the one hand, President Obama saying that his administration is going to be the most transparent in history and that they want to be friends with the press; and on the other hand, they are monitoring the metadata of journalists, they are seizing phone records, they’re trying to compel journalists to testify against their sources, they’re trying to figure out who journalists are talking to within government so that they can go and indict those people. That’s what they did to the Associated Press. They went after the aggressive team there—Adam Goldman and Matt Apuzzo and Kim Dozier and others—who were investigating the CIA. And they went to try to figure out who was talking to them. And then it resulted in the indictment of a—I believe he was a senior FBI official. They will go after the whistleblowers who are providing independent information to journalists, and then leak their own information that makes them look noble and like they’re winning the day for peace, freedom and democracy. They were a total sieve in the aftermath of the bin Laden raid, and everything they said was total—was a total lie, basically, that bin Laden had grabbed a wife and put her in front of him and, you know, all of these things.

So, we’re seeing this intensification of a war against journalists and journalism. There is no First Amendment in Britain. And I think that, you know, seeing people like Carl Bernstein and others stand up and defend The Guardian here is great, but we also have—we have a First Amendment here. Our profession, our trade is the only one specifically cited in the Constitution, for a reason. When all three branches of the government are colluding against the interests of the people, it’s the responsibility of journalists and journalism at large to hold them accountable. But this White House, like Bush before, Bushes before, they seem to want only state media. They want everything to look like MSNBC. And that’s not real journalism.

AMY GOODMAN: So, Jeremy, you, together with Glenn Greenwald, who has left The Guardian, and Pierre Omidyar, the founder of eBay, are starting a new—

AMY GOODMAN: And Laura Poitras, of course, who was key, with Glenn, in releasing all the leaks from Edward Snowden and filmed that first interview. You’re starting this new news organization. What are you doing? What’s it going to be called? And Alan Rusbridger said they have perhaps released 1 percent of the information that Snowden got. Will you be releasing more of that?

JEREMY SCAHILL: Yeah. I mean, well, first of all, just to answer your initial question, Pierre, Laura, Glenn and I started having a series of conversations, communications, several months ago. Glenn and Laura and I were already talking about creating some kind of a news site that we were going to use, not necessarily to replace what we do in our normal journalistic lives, but an additional outlet. And we were going to do a Kickstarter campaign, basically beg for money, and maybe try to hire one or two young journalists who would work with us on it. And at that sort of moment, I was in Rio discussing this with Glenn, and then we get this email from a mutual friend of Glenn’s and Pierre’s basically saying that Pierre, you know, is working on starting this new news organization and wants to talk to you about possibly contributing.

And that sort of kicked off this process then where it was clear that Pierre’s goal with this, which was to build a news organization that would have an inherently adversarial posture toward the state and those in power, was in line with what we wanted to do. And, you know, I—in a million years, if you had told me a year ago, “Oh, you’ll be working on a project with the founder of eBay,” I would have—I think I would have laughed, because it wouldn’t—it would be sort of antithetical to everything I think would happen. And yet, he has made clear that he wants us to be a journalist-led organization, and there’s going to be resources to do long-form investigative reporting, as well as rapid-response analysis. There’s going to be a video division that Laura Poitras is largely coordinating right now, so we want to have video journalism on the site. And we also are hiring a team of very savvy information security people, who are going to build tools for whistleblowers and are going to protect the integrity of the site and the communications of journalists. So, basically, this is an attempt to confront, initially now in the United States, the government’s attempt to quash the First Amendment and the Fourth Amendment to the Constitution. And that’s Pierre’s major goal with this organization, and it’s in line with what Glenn and I and Laura believe journalism should be about.

JUAN GONZÁLEZ: And his—the evolution in his thinking that got him to the point where he wanted to create this kind of a news organization, has he given you any sense of how that developed?

JEREMY SCAHILL: Well, you know, he started a site called Civil Beat. He lives in Hawaii and helped to found the Huffington Post site that’s in Hawaii and has dabbled in other media ventures. And before, you know, we started working, I talked to people who worked with him, and it—I mean, it really sounds like he is an effective–he’s a very effective leader in the ventures that he sets out to create. And my understanding is that he was so deeply offended by the extent of the surveillance that the NSA is doing on primarily Americans, as was his concern, that it started him thinking that he wanted to do something much bigger than just a regional site, that he actually wanted to go for it and build a major news organization. You know, he had looked at, I think, buying The Washington Post. He said that publicly in an interview. And my understanding is that he wanted to be able to start something fresh and to work with a team of people who aren’t necessarily tainted by having been a part of a big bureaucracy, and then someone else comes in, like Jeff Bezos, who—you know, the Amazon guy—bought The Washington Post. And I think—I don’t think he wanted to do that. He didn’t want to be sort of a conqueror. He wanted to be building something new.

AMY GOODMAN: Jeremy, before—well, when is it launching?

JEREMY SCAHILL: Early next year. I mean, we’re still working out the details on that.

AMY GOODMAN: Before we go, you’re leaving for Geneva tonight. Explain why.

JEREMY SCAHILL: Yeah, I’m going there to honor the Yemeni journalist Abdulelah Haider Shaye, who was in prison for three years after he exposed a U.S. cruise missile attack in Yemen, and he was interviewing leaders of al-Qaeda in the Arabian Peninsula. He was—his home was raided. He was arrested by Yemen security forces, put on trial for being an al-Qaeda collaborator, which was a complete farce, and then he was sentenced to five years in prison. He was supposed to be released at one point, and then President Obama personally called the dictator of Yemen and told him, “We don’t want him released,” and then he had ripped up this pardon of him. So, Iona Craig, the great journalist of The Times of London, and I will be in Geneva honoring him, because he’s not allowed to have a passport. He is under a default form of house arrest. And he believes firmly that it is President Obama and the White House that are responsible for the conditions of his release from prison. He has now been out of prison for two months, but he is still not free. And so, we are going to represent him—

JEREMY SCAHILL: —at a human rights award ceremony, because he can’t be there because of President Obama and the White House.

AMY GOODMAN: Jeremy Scahill, we want to thank you so much for being with us, and again, congratulations on Dirty Wars being shortlisted for an Oscar. 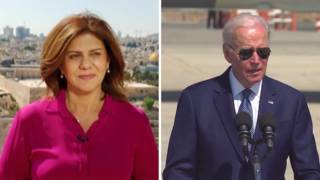