Former White House Press Secretary Robert Gibbs revealed over the weekend he was initially instructed to deny the existence of the Obama administration’s targeted killing program overseas. Even though the administration has since backed down from that stance, it continues to stonewall members of Congress on releasing the Justice Department memos explaining the program’s legal rationale. Unanswered questions around the program have held up the confirmation of CIA nominee John Brennan. “For a program that is so far-reaching and that has so many consequences, not just in the world, but for the rule of law, the Obama administration has an obligation to be far more transparent than they’ve been so far,” says Jameel Jaffer, deputy legal director of the American Civil Liberties Union. [includes rush transcript]

NERMEEN SHAIKH: Jameel Jaffer is still with us. He’s deputy legal director of the ACLU and a fellow at the Open Society Foundations. I want to turn to another issue. Leaders of the Senate Intelligence Committee plan to hold a vote on Thursday on John Brennan’s confirmation to become director of the CIA. Republican Senator Rand Paul has announced he will put a hold on Brennan until he gets an answer on whether the government’s assassination program can target Americans on U.S. soil. Paul discussed his demand on Fox News.

SEN. RAND PAUL: We’re talking about someone eating at a cafe in Boston or in New York, and a Hellfire missile comes raining in on them. There should be an easy answer from the administration on this. They should say, “Absolutely no, we will not kill Americans in America without an accusation, a trial and a jury.”

NERMEEN SHAIKH: That was Republican Senator Rand Paul. Jameel Jaffer, your comment on what he said and the upcoming confirmation hearing for John Brennan?

JAMEEL JAFFER: Well, you know, I think that legislators are absolutely right to press the Obama administration to release more information about the targeted killing program, including the targeted killing of Americans. We have been litigating for the release of the legal memos now for 18 months. And the administration’s position was initially that they couldn’t even acknowledge that there was in fact a targeted killing program. Now their position has shifted slightly, and they’re saying that they can’t acknowledge that the CIA has a role in the targeted killing program. But that kind of argument is really—should be—beneath our—beneath our system. You know, that kind of argument is—doesn’t really warrant the court’s time. It doesn’t warrant the kind of—you know, the kind of debate we’re having. We really should be having an argument about the merits, about the government’s substantive claims of legal authority. And it’s very hard to do that when the government is so secretive about what power it’s actually claiming.

AMY GOODMAN: Are you concerned about the choice of Brennan as head of the CIA?

JAMEEL JAFFER: Well, you know, John Brennan was very aware of the interrogation program developed by the Bush administration. He was aware that they were using—

AMY GOODMAN: Because he was in the Bush administration.

JAMEEL JAFFER: Exactly, right. And he was aware that they were using torture. And I think that there are still unanswered questions about precisely what he did in response to those—to those reports of torture.

And then there are very serious questions about his involvement in the drone program. He’s one of the architects, maybe the principal architect, of the targeted killing program. And the Obama administration has not given the public even the most basic information about that program. The legal memos are still secret. They haven’t disclosed numbers, civilian casualty numbers. We’re entirely reliant on the work of outside groups for those kinds of figures. And for a program that is so far-reaching and that has so many consequences, not just in the world, but for our—for the rule of law, the Obama administration has an obligation to be far more transparent than they’ve been so far.

AMY GOODMAN: Former White House Press Secretary Robert Gibbs revealed over the weekend he was initially instructed—this is when he was press secretary—to deny the existence of the Obama administration’s targeted killing program overseas. He made the disclosure during an appearance on Chris Hayes’ show on MSNBC.

ROBERT GIBBS: When I went through the process of becoming press secretary, one of the things—one of the first things they told me was, “You’re not even to acknowledge the drone program. You’re not even to discuss that it exists.” And so, I would get a question like that, and literally, I couldn’t tell you what Major [Garrett, Fox News reporter] asked, because once I figured out it was about the drone program, I realize I’m not supposed to talk about it. And—but here’s what’s inherently crazy about that proposition: You’re being asked a question based on reporting of a program that exists.

AMY GOODMAN: Jameel Jaffer of the ACLU, your response?

JAMEEL JAFFER: I agree, it’s inherently crazy. And the Obama administration should reconsider the positions that it’s taken in court, and it should release the documents that it’s been refusing to release. There’s a hearing in the House Judiciary Committee this afternoon at which the Obama administration will be pressed again for the release of the information. I think that they should take this opportunity to release information they should have released many weeks ago.

AMY GOODMAN: Jameel Jaffer, I want to thank you very much for being with us, deputy legal director—

AMY GOODMAN: —of the ACLU, fellow at the Open Society Foundations, argued the warrantless wiretapping case on behalf of the plaintiffs before the Supreme Court, which he lost, five-to-four decision. This is Democracy Now!, democracynow.org, The War and Peace Report. I’m Amy Goodman, with Nermeen Shaikh. 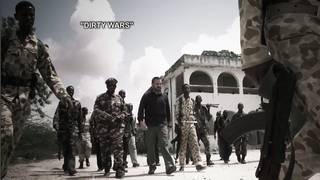