As President Obama unveiled a statue of Rosa Parks at the U.S. Capitol on Wednesday, the Supreme Court considered overturning a key achievement of the civil rights movement: the 1965 Voting Rights Act. Signed in 1965 by President L. Johnson, the law requires several states and counties with a history of racial discrimination to clear election-related changes with the federal government. While the Supreme Court’s four liberal justices appeared willing to back the Voting Rights Act, conservative justices were much more critical. Justice Antonin Scalia described the law as a “perpetuation of racial entitlement.” We’re joined by The Nation’s Ari Berman, who covered the hearing and has reported extensively on the battle for voting rights. Berman says overturning Section 5 of the Voting Rights Act “would open the floodgates to more voter suppression laws, more legal challenges, and it would make it difficult to enforce the voting rights laws that are on the books. … It would be one of the most radical and consequential decisions made by the court in a very long time.” [includes rush transcript]

JUAN GONZÁLEZ: We begin today with a look at key provisions of the landmark Voting Rights Act that came under fire Wednesday in a hearing before the U.S. Supreme Court. The act was signed in 1965 by President Lydon Johnson. It requires several states and counties with a history of racial discrimination to clear election-related changes with the federal government. At the same time the court was hearing the case, President Obama was unveiling a statue in the Capitol that honors the late civil rights leader Rosa Parks, who was present when President Johnson signed the Act.

PRESIDENT BARACK OBAMA: It’s been often remarked that Rosa Parks’ activism didn’t begin on that bus. Long before she made headlines, she had stood up for freedom, stood up for equality, fighting for voting rights, rallying against discrimination in the criminal justice system, serving in the local chapter of the NAACP. Her quiet leadership would continue long after she became an icon of the civil rights movement, working with Congressman Conyers to find homes for the homeless, preparing disadvantaged youth for a path to success, striving each day to right some wrong somewhere in this world.

JUAN GONZÁLEZ: Another lawmaker attending the unveiling of the Rosa Parks statue was 13-term Congressman John Lewis of Georgia. Lewis was almost killed when he marched during the 1965 Bloody Sunday march to Selma, Alabama, to demand the right to vote. When he was recently on Democracy Now!, Lewis described the Voting Rights Act that is now facing scrutiny before the Supreme Court.

REP. JOHN LEWIS: The Voting Rights Act of 1965 said, in effect, that you cannot use the literacy tests, you cannot have a poll tax, you cannot use certain devices, you cannot harass, you cannot intimidate. And before you make any changes in election laws dealing with registration, changing a precinct, local lines for any political position, you have to get pre-clearance from the Department of Justice or the federal district court in Washington, D.C.

AMY GOODMAN: The Voting Rights Act has been challenged by Shelby County, Alabama, which argued the preclearance requirement has outlived its usefulness. The Supreme Court’s four liberal justices appeared willing to agree with Congress that more progress needs to be made before freeing states from the special federal monitoring, but conservative justices were much more critical. Justice Antonin Scalia called the act a, quote, “perpetuation of racial entitlement.” Justice Sonia Sotomayor fought back over that claim.

For more, we’re joined now by The Nation’s Ari Berman, who was at the court covering the hearing. His recent in-depth article about the case asks, “Why Are Conservative Trying to Destroy the Voting Rights Act?”

We welcome you back to Democracy Now!, Ari. Explain what the justices were arguing or what their questions were yesterday in the Supreme Court.

ARI BERMAN: Sure. Well, thanks for having me back, Amy and Juan.

And the conservative justices, four of them—and, in many respects, Anthony Kennedy as a fifth—were concerned about really two things. Number one, does the Voting Rights Act cover the right states? So, is Section 5 still targeted at those places where discrimination is most prevalent? And then, number two, the second thing that they were concerned about is: Is there a replacement for Section 5? Because they view Section 5, in many cases, as an infringement on state sovereignty. So they were wondering: Do other provisions of the Voting Rights Act, such as Section 2—could it be an adequate replacement?

And the people that were defending the Voting Rights Act, both Solicitor General Donald Verrilli and Debo Adegbile of the NAACP Legal Defense Fund, said that, yes, discrimination is still targeted in those states covered by Section 5, and there is no replacement for Section 5. It’s the only section of the Voting Rights Act that puts the burden of proof on the discriminators themselves to have to prove that a voting change is not discriminatory. So it’s the only preemptive weapon in federal law to stop discriminatory voting changes, and that’s what makes it so powerful.

JUAN GONZÁLEZ: And, Ari, on the exchange, not—it was not a direct exchange between Sonia Sotomayor and Justice Scalia. Could you talk about that? Because I think it’s the first time that Justice Sotomayor comes out clearly in a court hearing so strongly opposed to one of her fellow justices.

And Sotomayor basically said, “Discrimination is discrimination. It’s ongoing today. This is not racial entitlement; this is about a basic fundamental right that for so many years America ignored.” And she said to Shelby County, the county that’s bringing the state, “You don’t have the standing to bring this challenge, because as recently as 2008 you were found by the Justice Department to be discriminating on the basis of race, doing a voting change that eliminated one of the only black districts in a city in the county.” So, Sotomayor basically said there was no basis to bring this challenge to the Voting Rights Act itself.

AMY GOODMAN: I want to turn to a clip, going back in history, from a documentary that recently featured King. It’s called A Filmed Record…Montgomery to Memphis. This is President Lyndon Johnson speaking just as he is signing the Voting Rights Act in 1965. Over his shoulder is Dr. Martin Luther King, who speaks next. First, President Johnson.

PRESIDENT LYNDON JOHNSON: Today is a triumph for freedom, as huge as any victory that’s ever been won on any battlefield. This law covers many pages, but the heart of the act is plain. Wherever, by clear and objective standards, states and counties are using regulations or laws or tests to deny the right to vote, then they will be struck down. If it is clear that state officials still intend to discriminate, then federal examiners will be sent in to register all eligible voters. This good Congress, the 89th Congress, acted swiftly in passing this act. And I intend to act with equal dispatch in enforcing this act.

AMY GOODMAN: That was Dr. Martin Luther King and, before him, President Johnson, from King: A Filmed Record…Montgomery to Memphis, the day President Johnson signed the Voting Rights Act. Ari Berman, where does it go from here, as we hear the significance of this moment when this was signed in 1965?

ARI BERMAN: Well, it’s been such a transformative law. It’s often been described as the most consequential law passed in the 20th century and really the high watermark of the civil rights movement. And Section 5 is the heart and soul of the Voting Rights Act. So, if the Supreme Court was to get rid of Section 5 or to significantly narrow it, and we will know this in June when a decision comes down, there really is no substitute for it, and it would be a very devastating setback for voting rights, not just in the places where Section 5 is covered, but there’s a thinking that if Section 5 goes, conservatives are going to start challenging those other provisions of the Voting Rights Act, like Section 2, which applies nationwide. The court has already limited Section 2 in many respects. So, this would kind of be like the Citizens United decision for voting rights. It would open the floodgates to more voter suppression laws, more legal challenges, and it would make it difficult to enforce the voting rights laws that are on the books in addition to Section 5. And so, there really is no substitute, and it would be one of the most radical and consequential decisions made by the court in a very long time.

JUAN GONZÁLEZ: And, Ari, if you could just briefly tell us the difference between Section 2 and Section 5. Section 5 more is a preclearance situation, where the Justice Department has to clear any proposed changes by states. And what would Section 2 be? Because at least Justice Kennedy was considering whether that would conceivably cover civil rights abuses in voting rights.

ARI BERMAN: Yeah, Section 5 pertains to 16—parts or all of 16 states with a history of racial discrimination in voting. It’s temporary, it must be reauthorized, and it’s preemptive. So the states have to clear those election changes.

Section 2 is nationwide. It’s permanent. But it puts the burden of proof on plaintiffs themselves to show that a voting change is discriminatory. Section 2 lawsuits are very long. They’re very expensive. They’re very difficult to win.

So, the best way that I think about it is: Section 5 is like stopping a crime before it’s happened, whereas Section 2 is like trying to solve a crime after it’s occurred, with no guarantees that you’ll actually be able to solve the crime. So they’re two very, very different things. They work in tandem. And in many ways, Section 2 would not be valid in those places where discrimination happens the most without the guarantees of Section 5. So the idea that we can just replace Section 2 for Section 5 is a very disturbing concept for voting rights advocates.

AMY GOODMAN: Ari Berman, we want to thank you for being with us, contributing writer for The Nation magazine. His recent in-depth article asks, “Why Are Conservatives Trying to Destroy the Voting Rights Act?”

When we come back, it’s Pope Benedict’s last day in office. We’ll be speaking with a former Catholic priest who wrote the book The Pope’s War: Why Ratzinger’s Secret Crusade Has Imperiled the Church and How It Can Be Saved. Stay with us.

Fascism in the Church: Ex-Priest on “The Pope’s War,” Clergy Abuse and Quelling Liberation Theology

NEXTFascism in the Church: Ex-Priest on “The Pope’s War,” Clergy Abuse and Quelling Liberation Theology 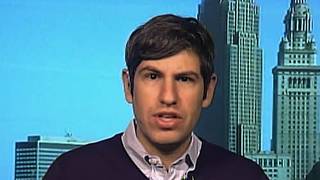