The lead plaintiff in the Defense of Marriage Act case before the U.S. Supreme Court is an 83-year-old lesbian named Edith Windsor. She sued the federal government after she was forced to pay additional estate taxes because it did not recognize her marriage to a woman, Thea Spyer. Windsor and Spyer met in 1962, got engaged soon after, but did not marry until 2007, near the end of Spyer’s life. Their life story was captured in the award-winning documentary, “Edie & Thea: A Very Long Engagement,” directed and produced by Susan Muska and Gréta Olafsdóttir. We air clips from the film. [includes rush transcript]

AMY GOODMAN: We end our show today by looking more at the remarkable woman behind the case challenging the constitutionality of DOMA, the federal Defense of Marriage Act, the case officially called United States v. Windsor. And the woman who launched it, 83-year-old Edie Windsor, she shared a long life and deep love with her late wife Thea Spyer. In '67, Thea proposed marriage to Edie, even though they knew it wasn't a possibility. The couple lived together as though they were married, buying a house together, sharing their earnings, living life. In 1975, Spyer was diagnosed with MS, multiple sclerosis. Edie cared for Thea as her MS progressed, causing paralysis and forcing her into a wheelchair. In 2007, doctors told Thea she only had a year to live. She reiterated her proposal to Edie. The couple flew to Toronto, and on May 22nd, 2007, they were wed in a ceremony officiated by Canada’s first openly gay judge, Justice Harvey Brownstone.

Let’s go to another clip from the award-winning documentary, Edie & Thea: A Very Long Engagement, directed and produced by Susan Muska and Gréta Olafsdóttir.

EDIE WINDSOR: Having gotten the bad prognosis, she woke up the next morning and said to me, “Do you still want to get married?” And I said, “Yes.” She said, “So do I.”

THEA SPYER: Essentially, it was so bad, let me say it, that I had about another year to live and that was it.

THEA SPYER: And that was it. And then, quite immediately, soon as doctor had left the room, I just knew it. Yeah, and now and quick.

EDIE WINDSOR: Usually people do this because they’re making a commitment, as they say, at the beginning of their lives. For us, it’s at the other end.

I’m always very active with gay stuff, and I work as a marriage ambassador for ESPA. And—but I went to Marriage Equality meeting, and I went to see—I knew some of them had been married in Canada. And I went, and I asked if anybody knew how do I go about getting an officiant. Harvey Brownstone, he’s Canada’s first openly gay judge, and he’s just a honey. You know, we’re thrilled to be married by him. I had to get the air tickets for everybody and the hotel rooms for everybody. And then I spoke to somebody in their sales department. I did not tell her it was a same-sex marriage. I just emailed her to say I don’t want any figures on the cake, because I have figures for the cake, which is us.

THEA SPYER: I also had a very strong feeling this would be my last trip on a plane ever. And I was very emotional about that.

EDIE WINDSOR: We want to do the vows, and we want to exchange rings. And I altered the standard vows very little—OK, “from this moment forward,” and I just added as a date “as in days past,” and that we call each other—

THEA SPYER: And I hereby pronounce you married.

THEA SPYER: We would like to do it in the most classical fashion possible.

EDIE WINDSOR: Yeah. For Thea to put a ring on my finger is not easy. I could say that, yeah?

EDIE WINDSOR: So, two of the—two of the best women will hold her arm and—OK, and put the ring in it and move it out toward me, and I will slide in. OK. We’re both dying to say, “With this ring, I thee wed.”

THEA SPYER: As the years go by, that feeling of attraction stays the same. Each one of us, in fact, looks different from how we looked when we met. But if I look at Edie now, she looks exactly the same to me, exactly the same. And she’ll say the same thing the other way.

JUSTICE HARVEY BROWNSTONE: Dear friends and family of Edie and Thea. We are gathered together today to witness a very happy and long-awaited event. Edie and Thea, you are here to obtain legal and societal recognition of your decision to accept each other totally and permanently. Over the past 41 years, you have been dancing. You have come to know and love each other. You have found joy and meaning together. And you have chosen to live your lives together. Now you seek to unite in marriage. And to this moment, you have brought the fullness of your hearts, the dreams that bind you together, and that particular personality and spirit which is uniquely your own.

THEA SPYER: I, Thea Spyer, choose you, Edie Windsor, to be my lawful wedded spouse.

EDIE WINDSOR: For richer and for poorer.

JUSTICE HARVEY BROWNSTONE: In sickness and in health.

EDIE WINDSOR: In sickness and in health.

JUSTICE HARVEY BROWNSTONE: Until death do us part.

EDIE WINDSOR: Until death do us part.

JUSTICE HARVEY BROWNSTONE: For as much as you, Edith Windsor and Thea Spyer, have consented together in wedlock and have pledged your faith and your trust to each other in the presence of these witnesses, and having confirmed the same by what you have said and by the giving and receiving of rings, now therefore I, Harvey Brownstone, judge of the Ontario Court of Justice, by virtue of the power vested in me under the Marriage Act of Ontario, do hereby pronounce you, Edith Windsor and Thea Spyer, to be legally married spouses and partners for life. Congratulations!

AMY GOODMAN: An excerpt from the documentary Edie & Thea: A Very Long Engagement. Visit BlessBlessProductions.com for more information on the film. 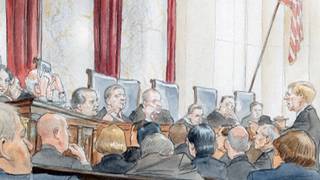