For the second day in a row, the U.S. Supreme Court is confronting the issue of same-sex marriage, hearing arguments today on the constitutionality of the Defense of Marriage Act, or DOMA, that denies federal benefits to legally married same-sex couples. On Tuesday, the justices considered the legality of California’s Proposition 8 ban on same-sex marriage. Representing two couples challenging the ban, attorney Ted Olson condemned Proposition 8. “It walls off gays and lesbians from marriage, the most important relation in life,” he said, “thus stigmatizing a class of Californians based upon their status and labeling their most cherished relationships as second-rate, different, unequal, and not OK.” We air excerpts from the court hearing and hear from the plaintiffs, who spoke outside the Supreme Court. [includes rush transcript]

AMY GOODMAN: For the second day in a row, the Supreme Court is confronting the issue of same-sex marriage, hearing arguments today on the constitutionality of DOMA. That’s the Defense of Marriage Act, that denies federal benefits to legally married same-sex couples. On Tuesday, the justices considered the legality of California’s Proposition 8 ban on same-sex marriage.

The historic cases are being heard as polls show growing support among Americans for gay marriage, but the nation remains divided. Nine states recognize same-sex marriage, while 30 states have constitutional amendments banning it.

On Tuesday, the Supreme Court justices appeared wary of endorsing a broad right for gay and lesbian couples to marry. We’ll play excerpts from the hearing in a moment, but first I want to turn to the plaintiffs who spoke outside the Supreme Court.

KRIS PERRY: Hi, I’m Kris Perry, plaintiff in the case just heard in the Supreme Court. In this country, as children, we learn that there is a founding principle: that all men and women are created equal. And we want this equality, because this is a founding principle. Unfortunately, with the passage of Proposition 8, we learned that there are a group of people in California who are not being treated equally, and that was recognized by a federal court and the 9th Circuit Court. We look forward to a day when Proposition 8 is finally and officially eliminated and equality is restored to the state of California.

SANDY STIER: Hi, I’m Sandy Stier. And I, like all Americans, I believe in equality. I also believe in our judicial system, and I have great faith in it. But more than anything, I believe in love. And Proposition 8 is a discriminatory law that hurts people. It hurts gays and lesbians in California, and it hurts the children we’re raising, and it does so for no good reason. It is our hope that we can move forward and remove this harm from society, so that gays and lesbians in California can go back to their lives, living equally alongside their neighbors with the same rights and protections as everyone else. Thank you all very much.

KRIS PERRY: Now Sandy and I would like to introduce you to our sons, two of our sons, Spencer and Elliott Perry.

SPENCER PERRY: Hello, my name is Spencer Perry, and this is my twin brother Elliott Perry. And we’re two of Kris and Sandy’s very, very proud sons. On behalf of myself and my twin brother, I just want to say how incredibly proud we are of our parents. We love them. We love our family. And we look forward to the day when we will be treated equally, just like our neighbors’ families. Thank you so much.

AMY GOODMAN: Inside the Supreme Court, attorney Theodore Olson, the nation’s former solicitor general under George W. Bush, opened his argument explaining why Proposition 8 should be struck down.

THEODORE OLSON: It walls off gay and lesbians from marriage, the most important relation in life, according to this court, thus stigmatizing a class of Californians based upon their status and labeling their most cherished relationships as second-rate, different, unequal, and not OK.

AMY GOODMAN: The Supreme Court’s potential swing vote, Justice Anthony Kennedy, warned the same-sex marriage case was bringing the court into, quote, “uncharted waters.” He questioned whether the court should have even taken the case.

JUSTICE ANTHONY KENNEDY: The problem with the case is that you’re really asking, particularly because of the sociological evidence you cite, for us to go into uncharted waters. And you can play with that metaphor: There’s a wonderful destination, or there’s a cliff—whatever the metaphor is. But you’re doing so in a case where the opinion is very narrow, basically that once the state goes halfway, it has to go all the way or 70 percent of the way. And you’re doing so in a case where there is a substantial question on standing. I just wonder if the case was properly granted.

AMY GOODMAN: Justice Sonia Sotomayor questioned attorney Charles Cooper, the lawyer defending California’s voter-passed ban on same-sex marriage. She asked him to name other contexts beyond marriage in which it was OK to discriminate against gay men and lesbians.

JUSTICE SONIA SOTOMAYOR: Outside of the marriage context, can you think of any other rational basis, reason, for a state using sexual orientation as a factor in denying homosexuals benefits or imposing burdens on them? Is there any other rational decision making that the government could make, denying them a job, not granting them benefits of some sort? Any other decision?

CHARLES COOPER: Your Honor, I cannot. I do not have any—anything to offer you—

CHARLES COOPER: —in that regard. It’s marriage—

JUSTICE SONIA SOTOMAYOR: If that is true, then why aren’t they a class? If they’re a class that makes any other discrimination improper, irrational, then why aren’t we treating them as a class for this one benefit? Are you saying that the interest of marriage is so much more compelling than any other interests the state could have?

CHARLES COOPER: No, Your Honor, we’re certainly not. We are saying the interest in marriage in the—in the state’s interest, society’s interest, in what we have framed as responsible procreation, is vital. But at bottom, with respect to those interests, our submission is that same-sex couples and opposite-sex couples are simply not similarly situated. 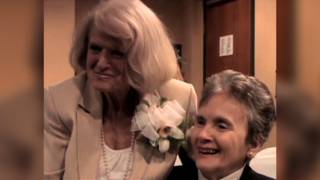