Lawyers for accused Army whistleblower Bradley Manning have opened their defense at his military court-martial with a bid to dismiss a number of charges, including aiding the enemy. We’re joined by the former chief prosecutor at Guantánamo Bay, Col. Morris Davis, who has just wrapped two days of testimony for the defense. Davis told the court that many of the files Manning leaked on Guantánamo were already out in the public and that they had no value to enemy groups and could not have harmed U.S. national security. We’re also joined from Fort Meade, Maryland, by Kevin Gosztola, a civil liberties blogger covering the trial for Firedoglake.com and co-author of “Truth And Consequences: The U.S. vs. Bradley Manning.”

Watch Part 2 of Interview: Kevin Gosztola: Behind the Scenes of the Bradley Manning Trial

NERMEEN SHAIKH: Defense attorneys for Army Private Bradley Manning are trying this week to show that much of the information he is charged with leaking was already publicly available. At his ongoing court-martial, Manning’s lawyers filed four motions on Tuesday asking for a “not guilty” verdict, arguing the government has not been able to prove he committed espionage or other offenses. The leaked files include assessment briefs for more than 700 prisoners at the Guantánamo Bay prison. On Monday, Manning’s attorneys began by playing the video he leaked of U.S. forces shooting and killing Iraqi civilians from a helicopter in 2007. The prosecution had sought to block the video from airing in court, calling it, quote, “not relevant.” Lawyers also submitted a transcript published in the book The Good Soldiers to show that the video had already been circulated before Manning made it public. Manning’s defense also asked the court to drop a number of charges, including aiding the enemy. During his pretrial hearing at Fort Meade in February, Manning acknowledged he gave the classified documents to WikiLeaks and said he wanted people to learn from his revelation.

AMY GOODMAN: Well, to talk more about the trial, we’re joined by two guests. Kevin Gosztola is civil liberties blogger at Firedoglake. He’s attended Manning’s trial in Fort Meade, Maryland. He’s co-author of Truth and Consequences: The U.S. vs. Bradley Manning and plaintiff in a lawsuit brought by the Center for Constitutional Rights that challenges government secrecy in Manning’s court-martial, as Democracy Now! is, as well.

Colonel Morris Davis is a retired Air Force colonel. He resigned as the former chief military prosecutor at Guantánamo in 2007, and he testified at the Manning trial Monday and Tuesday.

We welcome you both to Democracy Now! Colonel Davis, let’s begin with you. What did you say in court yesterday?

COL. MORRIS DAVIS: Well, part of the charges in the Manning case relate to documents from Guantánamo called detainee assessment briefs, that I was familiar with from my two-year tenure as chief prosecutor. There were five particular detainees that the government had selected as kind of a representative sampling, and what I did is take those classified documents and went out to open-source material, much of it available on government websites, and was able to find the vast majority of the information in the public domain, which—you know, to try to establish that there was no harm from the release of the documents on WikiLeaks.

AMY GOODMAN: Can you describe courtroom scene? What surprised you as you went in there?

COL. MORRIS DAVIS: Well, there was a large crowd, a lot of Manning supporters in the courtroom, as there have been throughout. It was the first chance I had to actually see Private Manning in person. And he’s fairly diminutive in size. And I got to speak with him briefly afterwards. And I’d say, you know, he’s in good spirits and positive, but you can see this has taken a toll on him and is wearing on him, as I’m sure it would with anyone in his circumstance.

NERMEEN SHAIKH: Colonel Davis, you also suggested that the WikiLeaks documents on Guantánamo detainees were in fact, quote, “wildly inaccurate.” Could you explain why you said that?

COL. MORRIS DAVIS: Sure. And just to add to that, President Obama appointed the Guantánamo Review Task Force that issued a report on January 22nd, 2010. And if you look at the report, his task force came to the same conclusion, that the detainee assessments, which were just a general biographical accounting of who the individual was and an assessment of how big of a risk they were—even the task force came to the same conclusion that many of the reports were inaccurate, some were overinflated, some were underinflated. So you never—you can’t tell. By picking up an assessment and looking at it, you don’t know if it’s right, wrong or, you know, how it really fits in. And so, certainly my experience from being the chief prosecutor is that just looking at the detainee assessment really had no value. They’re based on underlying documents, and those documents are important, but just the assessment itself—which we referred to as baseball cards, because it gives you the person’s name, height, weight, place of birth, date of birth, that kind of thing—really had no significant value. And I certainly can’t see how it would help al-Qaeda in any way to have access to these.

AMY GOODMAN: Who are the five Guantánamo detainees in the Manning case? I mean, this is extremely significant that you testified on the defense’s behalf, on Bradley Manning’s behalf, as the former chief military prosecutor at Guantánamo.

COL. MORRIS DAVIS: Right. In a—I guess as an example kind of the level of absurdity in this case, I can’t tell you the five names, because the detainee assessment briefs are classified. However, the open-source documents I compared to were admitted into evidence; they’re not classified. As I stated, three of the five, they’re featured in a film called The Road to Guantánamo that you can go on the Internet and see who those three are. You’ll have a pretty good idea of who three of the five in the assessment briefs are. But at least for now, that information is classified.

NERMEEN SHAIKH: Colonel Davis, you also spoke on Monday to some of Private Bradley Manning’s colleagues and superiors in the military. Could you explain what they said, what most struck you, and also your conversation with Private Manning?

COL. MORRIS DAVIS: Yes. On Monday, there were four of Private Manning’s former military colleagues—two captains and a chief warrant officer and a sergeant, so all people that were superior to Private Manning in rank, who were with him in Iraq. And it was really interesting to talk with them both, you know, in the witness waiting area, but also in their testimony, because, you know, the government has painted this picture of Private Manning as being inept and a malcontent. Their testimony was that he was their go-to guy, you know, the guy that really knew what was going on. If you needed information, he was the person to go to and, you know, was really a star performer. So it was interesting. It was a totally opposite perspective from the way he’s been portrayed by the government as a malcontent. And again, after I testified, I had just a brief opportunity to talk with Private Manning. He shook my hand and thanked me for testifying on his behalf. And I just told him that—you know, to hang in there, there are a lot of people pulling for him. So, again, I think it’s really wearing on him, but he appeared to be in good spirits and upbeat.

COL. MORRIS DAVIS: And certainly his attorney—his attorney, David Coombs, is really doing a stellar job of representing him.

AMY GOODMAN: We’re also joined by Kevin Gosztola. He’s in his car in the Fort Meade parking lot. Remember, that’s where Bradley Manning is being court-martialed, the trial is taking place, also the headquarters of the National Security Agency. Kevin, the prosecution wrapped up their case last week, and now it’s the defense’s turn. What is most significant for us to know in the trial at this point?

KEVIN GOSZTOLA: What I think people should pay attention to is this push to get charges dismissed, which you mentioned at the beginning of the segment here. The aiding the enemy charge is the most severe charge that he faces, and I think that people should really pay attention to how they’re charging it, because they’re dangerously conflating the act that WikiLeaks engaged in of publishing, which is a First Amendment act, with treason, with espionage against the United States. And they have, the prosecutors, through their arguments, suggested that Manning was working on behalf of WikiLeaks, going into the secret government networks and harvesting information. And so, they don’t believe that Manning was doing what he did as part of himself wanting to change the world and spark reform.

I think that people should really consider that—you know, we know that if you shout “Fire!” in a crowded theater, that that is generally frowned upon. Well, the prosecutors in this case should not be able to shout “Terrorism!” in a military courtroom when there is no evidence at all that Manning’s act had any connection whatsoever to terrorism. There has been no evidence presented that Manning did any searches for al-Qaeda, al-Qaeda in the Arabian Peninsula, this figure who was a spokesperson for al-Qaeda, Adam Gadahn, who was in a propaganda video that has been entered into evidence. There’s no evidence that he ever looked at Inspire magazine, which is an al-Qaeda in the Arabian Peninsula magazine. And even though, you know, al-Qaeda used this as propaganda, the releases of WikiLeaks, there is no strategic or tactical advantage that it can be seen that al-Qaeda used to launch any attacks against the United States. And yet, after the fact, the prosecutors are going after Manning and trying to paint him as somebody who aided terrorism.

AMY GOODMAN: We’re going to have to leave it there, but we’re going to continue this in a post-show conversation, and we’re going to post it online at democracynow.org. Kevin Gosztola is speaking to us from the Fort Meade parking lot where Bradley Manning is on trial. He is a civil liberties blogger at Firedoglake and has been attending Manning’s trial from the beginning. We also want to thank Colonel Morris Davis for joining us, retired Air Force colonel, resigned as the former chief military prosecutor at Guantánamo Bay in 2007. He testified at the Manning trial Monday and Tuesday. 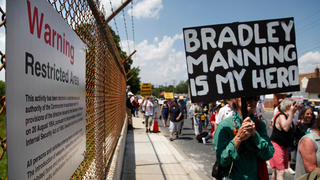