For weeks, thousands of people have been gathering at the North Carolina State Legislative Building for the weekly “Moral Monday” protest called by the NAACP to oppose the agenda of the Republican-led state Legislature. Over the past 10 Mondays, 700 people have been arrested, including the Rev. Dr. William Barber, president of the North Carolina NAACP. “If you want to change the nation, you have to change the South,” Barber says. “If you want to change the South, you have to change the state capitols, and we believe that this extreme ideological group understands that their narrow-minded agenda doesn’t have much longer in the public arena.”

JUAN GONZÁLEZ: We continue now to look at North Carolina. For weeks, thousands of people have been gathering at the North Carolina Legislative Building for the weekly Moral Monday protest to protest the agenda of the Republican-led state Legislature. Seven hundred people have been arrested over the past 10 weeks. In a moment, we’ll be joined by one of the leaders of the Moral Monday protests, president of the North Carolina NAACP, Reverend William Barber. But first, these are some of the voices of those who spoke out before they were arrested.

TERRY VAN DUYN: Too many of our legislators think that they have bought and paid their positions and they don’t have to listen to us anymore. And I’m here to tell them, this is not their house, this is our house.

UNIDENTIFIED WOMAN 1: And just take a look around you. They have not divided us, they have united us.

WAYNE BOSTICK: And I stand here with you to let our terminator legislators know that their day of recall will come. And I hope that you show them the same apathy at the voting polls that they have shown us here in North Carolina.

UNIDENTIFIED WOMAN 2: We must stand today for what is right because it’s right. Actions speak louder than words. And it’s time for all good women to stand up, to speak up, to cut up, if necessary.

UNIDENTIFIED WOMAN 1: Some of us are here because of women’s rights, others because of unemployment or fracking. But no matter what the issue, we are standing together.

Welcome to Democracy Now! We just talked about the anti-choice legislation that Moral Mondays has taken on. Reverend Dr. William Barber, talk about the other issues that are causing, well, at this point, over 700 people to get arrested.

REV. DR. WILLIAM BARBER: Well, thank you so much, Amy, and thank you to your audience that’s always so informed.

You know, the Moral Mondays is not a spontaneous piece. It grows out of eight years of organizing with the Historic Thousands on Jones Street People’s Assembly Coalition. Groups like Planned Parenthood and others have been involved all along, because we know that in the South what changes the dynamics is fusion politics, and we understand the interconnectedness of our issues.

And what we’ve been seeing since January in this Legislature is that to cut 500,000 people from Medicaid and from—Medicaid—disabled children—is immoral, it’s extreme, and it’s bad policy. To deny 170,000 people unemployment, who lost their jobs with no fault of their own, is extreme, it’s immoral, and it’s bad policy. To attack the poor by undoing the earned income tax credit, that even Ronald Reagan said was good—900,000 people, so that you can give 23 families, wealthy families, a tax cut—is immoral, extreme and bad policy. To attack women’s rights, to attack voting rights, to try to engage in voter suppression, to undermine public education—all of these are part of what this extreme Legislature—I don’t even call them Republican, Democrat—but extreme Legislature is doing. We believe it’s immoral.

And we’re forcing a new conversation in the public arena that’s not Republican and Democrat, that’s not liberal versus conservative, but really is talking about what’s moral and immoral, what’s extreme and what’s bad policy. We say it like this: It’s constitutionally inconsistent, it’s morally indefensible, and it’s economically insane, what they’re doing.

JUAN GONZÁLEZ: And your decision to focus in on the state Legislature, why was that made? And what’s been the impact or the result among the citizens of North Carolina?

REV. DR. WILLIAM BARBER: Well, you know, now they are down to less than one person out of five feels that the Legislature and this leadership is good for North Carolina. Their numbers have plummeted. The numbers of the governor have plummeted. But we’ve known for quite some time that the real fight in this country is at the state capitols, particularly in the South, because in the state capitols, that’s where election laws are passed, educational laws, labor rights. All of those issues grow out of legislation that come through state capitols. And this particular Legislature is really a reaction to our success. You know, last few years, we were able to win things like same-day registration, early voting and Sunday voting, earned income tax credit, the Racial Justice Act, more focus on public education. And we did it with a different electorate, a fusion electorate, a coming together that takes advantage of the new demographic, where whites and blacks and Latinos and gay and straight and people of faith and labor and women and men and rural and urban come together. That’s the dynamic that can change the South.

So that’s why we’re focused on these state capitols, because of the power at state capitols. And if you want to change the nation, you have to change the South. If you want to change the South, you have to change these state capitols. And we believe that this extreme ideological group understands that their narrow-minded agenda doesn’t have much longer in the public arena. In other words, the demographics are changing. People are coming together. They know they have a limited amount of time. And so what they’re trying to do is reshuffle public policy, but also, not only reshuffle public policy, they’re trying to restructure even how people have access to voting, as a desperation to hold onto power.

AMY GOODMAN: Reverend Dr. William Barber, we want to thank you for being with us, president of the North Carolina NAACP. 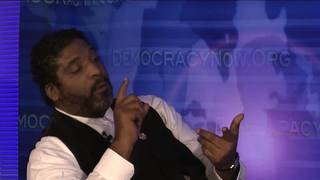