For a second night, thousands of protesters swarmed the streets of New York City to protest a grand jury’s decision not to indict the white police officer who killed Eric Garner, an African-American father of six, after placing him in a banned chokehold. Protesters chanted, “I can’t breathe,” as they blocked traffic, shutting down the Manhattan and Brooklyn bridges, the West Side Highway and the Holland Tunnel. The police reported making more than 200 arrests, including many near Times Square. In Washington, D.C., hundreds staged a die-in near the Washington Monument. In Boston, protesters shut down the Massachusetts Turnpike and Interstate 93 as well as part of the city’s subway system. In Chicago, demonstrators shouted, “Hands up, don’t shoot!” while blocking Lake Shore Drive along Lake Michigan. In San Francisco, marchers shut down Market Street. Hundreds also marched in Oakland.

StoryJan 09, 2018“Her Heart Was Attacked”: Hundreds Gather in Harlem for Funeral of Erica Garner

AMY GOODMAN: This is Democracy Now!, as we turn now to the top story of the day.

JUAN GONZÁLEZ: Well, we turn now to the ongoing protests over the police killing of Eric Garner in New York.

JUAN GONZÁLEZ: For a second night, thousands of protesters swarmed the streets of New York to protest a grand jury’s decision not to indict the white police officer who killed Eric Garner, an African-American father of six, after placing him in a banned chokehold. Garner’s last words were “I can’t breathe.” Protesters chanted those words as they blocked traffic, shutting down the Manhattan and Brooklyn bridges, the West Side Highway and the Holland Tunnel. The police reported making more than 200 arrests, including many near Times Square.

PROTESTER: Look at the cops. This is supposed to be a peaceful protest. Bill de Blasio said it himself: We could be out here and do what we want, as long as we’re not doing any trouble. And look what’s going on. They’re pushing people. They’re hitting people, pushing them out the way, throwing them on the floor, arresting them for no apparent reason at all.

AMY GOODMAN: Protesters held symbolic die-ins across Manhattan and Brooklyn. Family members of loved ones killed by NYPD led one of the marches across the Brooklyn Bridge, then held a seven-minute die-in that marked the time the medics left Garner untreated as he lay on the ground unresponsive. Another die-in lasted 11 minutes, one for each time Garner was heard telling officers, quote, “I can’t breathe,” in a video recording of the fatal incident. Outside the Barclays Center in Brooklyn, protesters carried mock coffins while singing protest songs.

PROTESTERS: [singing] I still hear my brother crying, “I can’t breathe.” Now I’m in the struggle saying, “I can’t leave,” calling out the violence of these racist police. We ain’t gonna stop until our people are free.

AMY GOODMAN: Similar protests were held across the country. In Washington, D.C., hundreds staged a die-in near the Washington Monument.

PROTESTER: We’re peacefully protesting, and that our lives matter, and everyone should care, because police brutality is not OK against black people, against anybody.

MAYOR BILL DE BLASIO: People need to know black lives and brown lives matter as much as white lives. It’s what we still have to aspire to. I said it yesterday. I believe it. This is not just a problem in New York City; it is an American problem, an American challenge. It’s an issue that goes back to the founding of this republic that we still haven’t solved. Our generation has to resolve it. The leaders you see around me, we are all responsible now. The weight of history can’t be our excuse. And I’ve said that I feel these issues very, very personally.

AMY GOODMAN: The case against New York police officer Daniel Pantaleo, who placed Eric Garner in a chokehold, is far from over. Garner’s family is expected to file a civil wrongful death lawsuit. The NYPD has launched an investigation, and other officers at the scene are reportedly scheduled to be interviewed today.

New reports show Pantaleo was the subject of two civil rights lawsuits in 2013 over false arrests and abuse. In one incident, he ordered two black men to strip naked on the street for a search. The charges against the men were dismissed. 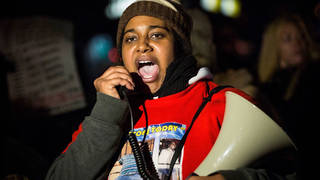 “Her Heart Was Attacked”: Hundreds Gather in Harlem for Funeral of Erica Garner