As we broadcast from the United Nations Climate Summit in Lima, Peru, we speak with Pascoe Sabido of the Corporate Europe Observatory, which has just released a new report, “Corporate Conquistadors: The Many Ways Multinationals Both Drive and Profit from Climate Destruction.” “This is COP 20. For 20 years we’ve been going without progressing to a fair and progressive climate deal that we need,” Sabido says. “One of the big reasons is the aggressive lobbying of the fossil fuel industry both at the national level and here at the talks.”

StoryDec 11, 2014From the Streets to the Suites, Protesters Call for Climate Justice at Corporate Gathering in Lima

AMY GOODMAN: Before that, you heard Pascoe Sabido of the Corporate Europe Observatory. Pascoe joins us here live right now. We’re broadcasting from Lima, Peru. We are inside the COP 20, as it’s called, right now. Interesting, it’s sort of “cop watch” in New York to ”COP watch” right now in Lima. COP is, here, short for Conference of Parties, and it’s the 20th anniversary.

The Corporate Europe Observatory and two other groups, the Democracy Center and the Transnational Institute, just published a new report titled “Corporate Conquistadors: The Many Ways Multinationals Both Drive and Profit from Climate Destruction.”

Pascoe, welcome back to Democracy Now!

AMY GOODMAN: Talk about this report.

PASCOE SABIDO: So, this report is a look—I guess, our attempt to try and shine a bit more light on the role that big extractive companies are playing in the climate crisis. We’ve taken three particular examples of European corporations, who all operate in Latin America, to try and tell a bit more of a story. So these corporations—Spain’s Repsol, we have the Swiss Glencore Xstrata, as well as Italian-Spanish Enel-Endesa—and they’re all here in Latin America, not just causing havoc on the ground, human rights abuses, environmental abuses, with large amounts of local resistance to what they’re doing, extracting gas, oil, minerals, as well as building large hydro, but then trying to show the other side of it. So they’re not just trashing local communities, they’re also trashing these climate talks.

These are some of the biggest companies, and that means they’re multibillion-dollar, multibillion-euro companies, and they have a lot to protect. And they know, because their activities are driving climate change—I mean, they’re really the ones behind fossil fuel extraction—then any action that moves against this, which is what we’re trying to do here in the talks, ultimately—we’re trying to move away from fossil fuel extraction—that’s going to cost them a lot of money, so they’re really trying to get in the way and stop that happening.

AMY GOODMAN: Talk about the party you crashed yesterday, or the—

AMY GOODMAN: —sub-meeting that you crashed.

PASCOE SABIDO: So, yeah, there was lots and lots of very angry and active people there trying to protest against the presence of the fossil fuel industry here in these talks. I mean, as you said, this is COP 20. Twenty years we’ve been going without progressing towards a sort of climate deal, a fair, ambitious climate deal that we need. And one of the big reasons is because of the aggressive lobbying of the fossil fuel industry, both at the national level and here in the talks. So, I mean, I don’t know if you saw the T-shirts. There was a hashtag: “#GetTheFFOut.” This is trying to get fossil fuel industries out of this process. They’re the same ones who are driving the climate crisis and the same ones who are stopping us being able to solve it. So we need to get them out of this process. That doesn’t mean just the U.N.; this means climate policy in general. So much of this influencing happens at a national level. So many governments come here with their positions already made up, because the likes of Shell and Chevron have already done their lobbying at home. Why is Canada pushing CCS, carbon capture and storage, so much? It’s because of Shell. Why is Australia doing so little here? It’s because of the likes of Glencore Xstrata and the lobby groups back home. So we need to be clear about this.

AMY GOODMAN: Yesterday, it was Lord Stern that spoke at the talks. I’m not talking about Todd Stern, who is the U.S. climate negotiator, the chief negotiator here. Talk about the significance of who he is and why he had invited Shell to these talks.

PASCOE SABIDO: Yeah, so, this was an industry side event. I mean, it was organized by Shell, Chevron, the International Emissions Trading Association, who are the base of the carbon market lobby. And they invited Lord Stern, who in 2006 wrote the really influential Stern Review, doing the economic case behind climate change, which led to a lot of action. And this guy is respected, and yet here he is lending his name to an event which was originally called “Why divest from fossil fuels when we have an abundance of low-carbon fossil fuel energy readily available?” So, you know, this is the fossil fuel industry trying not to change away from their dirty, destructive extractive model, and Lord Stern has lent his name to them. I mean, he’s given them legitimacy.

AMY GOODMAN: What is the point of the Peru summit here? I mean, you have the binding summit next year, and apparently Lord Stern is now saying—what was one of the articles? “Stern Warning”—you know, don’t think about a binding treaty, maybe that’s not the answer. What do you feel is the answer, Pascoe, right now?

PASCOE SABIDO: I think the problem with these talks is the fossil fuel industries. It’s the power of the vested interests who are managing to have a say over positions. In Lima, all we’ve seen is backsliding, backsliding on commitments on finance, commitments on adaptation—

PASCOE SABIDO: Climate finance to pay for both how countries who are already affected by climate change can deal with those impacts, like the Philippines, like we saw yesterday. Finance to make sure they don’t have to follow the same dirty development pathways that Northern countries have followed, and as well as things like loss and damage, technology transfer. There’s so many parts.

PASCOE SABIDO: “Loss and damage” means, like the Philippines again, giving compensation, reparations even, for countries that haven’t caused this climate crisis, but are already suffering. So, there’s all these parts of a climate package. Next year in Paris, I don’t predict that we’re going to have something that many of us are going to be happy with. It’s not going to be ambitious. It’s not going to be just. But the reason that is, is because we, as social movements, as concerned citizens, we don’t have power, we don’t have control over our governments, they are not listening to us. So, in order to get a good outcome here in the U.N., we need to have power at home, and we need to really build that accountability. And one of the clear ways is to get rid of the fossil fuel industry’s influence, you know, out of these talks, out of our national governments, and really build our power.

AMY GOODMAN: Pascoe, we want to thank you for being with us. Pascoe Sabido, researcher, campaigner at Corporate Europe Observatory, which has co-published a report that we’ll link to at democracynow.org called “Corporate Conquistadors: The Many Ways Multinationals Both Drive and Profit from Climate Destruction.”

This is Democracy Now! Coming up, we’ll speak with Atossa Soltani, the founder—the head of Amazon Watch. Also, we’ll speak to Pablo Solón. He is the former Bolivian ambassador to the United States and former Bolivian chief climate negotiator. That’s coming up. Stay with us. 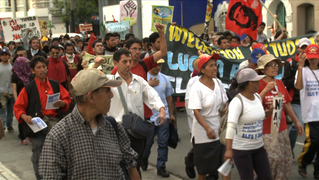