In Peru, thousands marched in Lima on Wednesday calling on world leaders at the United Nations climate summit to do more to tackle climate change. After the main march, hundreds headed across town in a spontaneous action against a corporate meeting called the World Climate Summit. Democracy Now! producer Renée Feltz files a report from the streets.

AMY GOODMAN: We’re broadcasting from Lima, Peru, at the United Nations Climate Change Conference, known as COP 20. After the main march of thousands on Wednesday, hundreds headed across town to protest a corporate meeting called the World Climate Summit. Democracy Now!’s Renée Feltz was there and filed this report.

RENÉE FELTZ: This is Renée Feltz with Democracy Now! We’re in a small park in downtown Lima. Many of the protesters that we’ve come across here have just come from the major march, some say the largest climate march in Latin America’s history. Now, they’ve had a general assembly of sorts. It looks like Occupy here in Lima. And we’re going to move again. It looks like we’re heading towards a hotel. Let’s find out where they’re going.

I’m here with Pascoe Sabido, one of the people we’ve had on the program this week. Now he’s outside the COP and in the streets. Can you tell us what’s going on here? Where are we going?

PASCOE SABIDO: So we’re going to the World Climate Summit. Some would have thought that actually the COP, COP 20, was the World Climate Summit. But no, 500 of the biggest business leaders have decided to have their own summit, where they claim on their website this is where the influence takes place, it’s the most influential event of the year with governments and business leaders. So we’re going to go pay them a visit, see what they have to say, and actually make it known that the power lies with us, the people, not them, the corporations, that they are the ones causing this crisis, and they’re not the ones to get us out of it. So, it’s—we’re talking here about system change, not climate change, and that it’s us, the people, who are going to provide the solutions from below.

RENÉE FELTZ: We’ve left the park. We’ve taken a street in downtown Lima. We’re going to talk to some people who are participating in this march. Hi, can you introduce yourself?

RENÉE FELTZ: And what brings you out here today with your friend with his cactus?

RAQUEL ROSENBERG: We want to show everyone here at this COP that in Brazil, especially São Paulo, we have no water for all the population. And nobody knows about it. So, the idea is to show it with this amazing invention by Mundano, my friend here.

RENÉE FELTZ: And why don’t you have any water?

RAQUEL ROSENBERG: Because of climate change, of course.

RENÉE FELTZ: The protest continues as the corporate meetings continue. The people are chanting, “The people, awakened, will never be servants.” And what separates the protest and the people in the streets from the corporations in the suites here is a line of police. They’re wearing shields. They’re wearing face shields. They’re holding large shields. And many of them are holding what looks like tear gas launchers. And we’ll see if that’s deployed.

PASCOE SABIDO: So, we’ve arrived just outside the Hilton. This is where all these business leaders are meeting for the World Climate Summit. And the police have formed two lines, with another line behind them. And we’re wondering—we’re working on what to do collectively. They tried to ask us to identify leaders here, so that those leaders can then go inside and talk to people. All they want to do is identify people probably to arrest them. And this is a spontaneous movement. This is people who have the interests of their entire communities at stake, and we’re not going to go inside. We’ve got nothing to say to them. Our messages are heard. If they want to speak to us, they can come to us.

MILLER ARMIN DUSSÁN CALDERÓN: [translated] Multinationals, out of our countries! In Colombia, like any country in Latin America, we live the invasion of the transnationals, where they are imposing a model that is an extraction model, financed by dispossession, where the transnational companies want to have control of our territories to extract intensively our natural riches, exploit intensively our workforce, with the only goal of accumulating capital for all of their monopolies, generating the greatest ecocide in the history of humanity.

RUTH NYAMBURA: My name is Ruth Nyambura. I come from Kenya, and I work for the African Biodiversity Network.

RENÉE FELTZ: And, Ruth, have you been inside the COP this year?

RUTH NYAMBURA: Yes, I’ve been inside the COP this year, up until yesterday, but also been going to the Cumbre, since it began on Monday. I’ve had a few sessions here, mostly led by the people you are seeing in the protests here. So, Cumbre has been a space—it’s been like the—it’s the alternative space where real issues, systemic and structural issues, are being tackled, with proper analysis, where we’re trying to build a new and just world, where we’re trying to dismantle the systems of oppression that we currently have.

RENÉE FELTZ: I just heard that the police were looking for the leaders here to perhaps go inside or perhaps arrest. If you were to go inside this meeting, where all these corporations are gathered, what would you tell them?

AMY GOODMAN: In the end, the nonviolent protest against the corporate-sponsored World Climate Summit ended with just one arrest. That report by Democracy Now!'s Renée Feltz and John Hamilton at the World Climate Summit here in Lima, Peru, where we're broadcasting live all week from the U.N. climate conference.

Peruvian Protester: My Brother Was Disappeared in 1993 at El Pentagonito, the Site of Climate Summit

NEXTPeruvian Protester: My Brother Was Disappeared in 1993 at El Pentagonito, the Site of Climate Summit 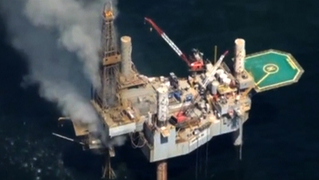