We end today’s show with news that Japan has announced a major push to revive its nuclear energy program, just weeks before the third anniversary of the Fukushima Daiichi nuclear disaster. This comes just a week after it was revealed about 100 tons of highly radioactive water have leaked from one of the hundreds of storage tanks at the Fukushima nuclear power plant. Here in the United States, the Obama administration announced last week it approved $6.5 billion in loan guarantees to back construction of the country’s first new nuclear power plant in more than 30 years. This comes as a nuclear waste disposal site is set to reopen in New Mexico following an unexplained leak of radioactive material. We speak to Edwin Lyman and Susan Stranahan, co-authors of the new book, “Fukushima: The Story of a Nuclear Disaster.”

StoryJan 17, 2014Mayor of Town That Hosted Fukushima Nuclear Plant Says He Was Told: “No Accident Could Ever Happen”

AMY GOODMAN: We end today’s show with nuclear news from both Japan and the United States. Japan has just announced a major push to revive its nuclear energy program, just weeks before the third anniversary of the Fukushima Daiichi nuclear meltdown. This comes just a week after it was revealed about a hundred tons of highly radioactive water had leaked from one of the hundreds of storage tanks at the Fukushima nuclear power plant.

Here in the United States, the Obama administration announced last week it approved $6.5 billion in loan guarantees to back construction of the country’s first new nuclear power plant in more than 30 years. This comes as a nuclear waste disposal site is set to reopen near Carlsbad, New Mexico, following an unexplained leak of radioactive material that occurred on February 14th. The underground waste dump was shut down after an air monitor detected radioactive contamination. On Monday, federal regulators reported “slightly elevated levels” of airborne radioactivity, but said they didn’t pose a threat to the public.

For more, we’re joined by the co-authors of the new book, Fukushima: The Story of a Nuclear Disaster. Edwin Lyman is one of the country’s leading experts on nuclear power safety and security and is senior global security scientist with the Union of Concerned Scientists. Susan Stranahan is with this. She has covered nuclear energy issues since she was the lead reporter for The Philadelphia Inquirer’s coverage of the Three Mile Island accident, which was awarded a Pulitzer Prize.

We’re going to begin with Edwin Lyman. Talk about these parallel nuclear developments, Japan with its conservative prime minister, Shinzo Abe, despite the polls showing overwhelming opposition to anti-nuclear—to growth of nuclear power reliance, is announcing upping this, and the United States is also moving in this direction.

EDWIN LYMAN: Well, I think these are both symptoms of the same phenomenon, which is the complacency about the nuclear industry and its dangers that was prevalent before Fukushima and is still—and still exists today. So, we have Japan, the new government, which is hoping that the people will eventually forget about the crisis that they went through, so that they can restart the 50 nuclear power plants that were shut down after the accident. In the United States, we have the government’s all-of-the-above energy policy, which includes more government subsidies for nuclear power. And we’re very concerned that if these efforts go forward without taking all the lessons of Fukushima into account, that we’re setting up a potential disaster.

AMY GOODMAN: What are those lessons?

EDWIN LYMAN: Well, the main lesson is you have to accept the fact that any nuclear power plant is going to be vulnerable to a large natural disaster and that there’s no way to completely eliminate the dangers of nuclear power. There are steps you can take to reduce the risk, but we’re afraid that here in the United States the Nuclear Regulatory Commission and the industry are not going as far as they need to go to really reduce the risk to the American people.

AMY GOODMAN: What are the stories, Susan Stranahan, that this country is missing? You were the lead reporter on the coverage of Three Mile Island. Young people weren’t even born, who are watching or listening to this show right now. They might not even know what Three Mile Island is.

SUSAN STRANAHAN: Well, I think the parallels from Three Mile Island in '79 and Fukushima are that the industry regulators and the American public were not prepared for what happened. And what we point out in the book is that it's been 35 years since Three Mile Island, and fundamental lessons remain unlearned. And fundamental mindsets exist, that were prevalent in 1979, are prevalent today. And as Ed said, we haven’t learned the lessons from Fukushima. We need to learn those and then move forward.

AMY GOODMAN: And explain what the lessons from Three Mile Island and Fukushima are.

SUSAN STRANAHAN: Well, I think it’s what—it’s what we point out in the book, is that there is just a general assumption that nuclear power is safe and we don’t need to add on an extra layer for the unexpected. As we say in the book, they’ve set the safety bar at X, but have refused to ask what if X-plus-1 happens?

AMY GOODMAN: Edwin Lyman, what most shocked you when you were doing research for this book?

EDWIN LYMAN: Well, being in Washington for a long time, very little shocks me. But I could say that while the government—while the U.S. government was telling the American people there was nothing to fear from Fukushima and that U.S. plants aren’t vulnerable to the same problems, internally, they were—there was a much different story. So we’ve learned from a lot of Freedom of Information Act documents that the Nuclear Regulatory Commission and the White House were actually very concerned about the potential impact of radiation from Fukushima affecting not only Americans in Tokyo, which was more than a hundred miles away from the plant, but also Americans on the West Coast. And they were furiously running calculations to try to figure out how bad it could get. But there was no sense of this in what they were telling the public.

AMY GOODMAN: But, so Americans were telling Americans—the U.S. government was telling Americans in Japan to leave, much quicker than the Japanese government was. I just—we just came from Tokyo. We broadcast for three days from Japan. And we’re going to play the interview I did with the former prime minister, the one in charge at the time, Naoto Kan. He said it was extremely difficult to get a straight answer from TEPCO, the Tokyo Electric Power Company, that ran the plants, and he had to fly in. He figured the only place he could get a straight, nonpolitical answer—he flew in the middle of the night to the plant to talk to the workers to figure out whether he had to evacuate 50 million people in Tokyo.

EDWIN LYMAN: Yes, well, there was the general panic because the utility, nuclear power, was a huge part of its profile, and they wanted to do everything they could to stabilize the accident so they didn’t have to tell the rest of the world that they were failing. And so, there was a lack of transparency, which is persistent to this day and hampering the cleanup efforts.

AMY GOODMAN: The human stories that you followed, Susan?

SUSAN STRANAHAN: I think that what we have always missed in the nuclear debate is the human side, the face of a disaster. And that’s what I hope to portray by my contribution. Ed and our co-author, Dave Lochbaum, are nuclear safety experts. I’m a journalist. And I tended to see the opportunity to put a human face on a nuclear disaster. So we portray what happened to the people in Japan, the disruptions in their lives, the economic consequences, and a lot of the political backstory into how we got where we are today.

AMY GOODMAN: This leak that took place in New Mexico on Valentine’s Day, on February 14th, this is right near Carlsbad, New Mexico, at the WIPP facility. Explain what that is and why you’re concerned about it. Government officials say, “Don’t be concerned.”

EDWIN LYMAN: Well, WIPP is a—is the only operating geologic repository for nuclear waste in the U.S., and it’s where the Department of Energy sends waste that’s contaminated with isotopes of plutonium that have very long half-lives and are very toxic. So there’s a lot of garbage from the legacy of making nuclear weapons that’s contaminated with plutonium, and that is essentially put into 55-gallon waste drums and loaded into this salt mine. And the leak, no one really knows the origin, but they’ve detected plutonium and americium actually outside of the facility. And so, they have to figure out exactly where it came from, and no one knows yet.

AMY GOODMAN: And now, this has been touted as such a safe facility that New Mexico, this area, could become a depository for much more nuclear waste. That might alarm many in New Mexico.

EDWIN LYMAN: Right. The local boosters want to keep it going, and so they’re searching the country for more waste to put in it. But this issue, depending on how it plays out, could put a monkey wrench in those plans.

AMY GOODMAN: I want to thank you both for being with us. Congratulations on your new book, Fukushima: The Story of a Nuclear Disaster. The co-authors, Edwin Lyman and Susan Stranahan.

Mayor of Town That Hosted Fukushima Nuclear Plant Says He Was Told: “No Accident Could Ever Happen” 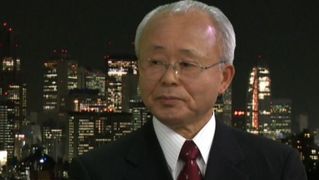 Mayor of Town That Hosted Fukushima Nuclear Plant Says He Was Told: “No Accident Could Ever Happen”