The Boko Haram has released a video showing the first images of the kidnapped Nigerian schoolgirls since their abduction nearly one month ago. Close to half of the nearly 300 girls are seen on the tape, chanting what appears to be a verse from the Qur’an. The Boko Haram leader Abubakar Shekau appears to offer the girls’ freedom in exchange for the Nigerian government’s release of all the group’s prisoners. We speak with Nigerian journalist Omoyele Sowore, publisher of the online news site Sahara Reporters.

AMY GOODMAN: We end today’s show with the latest on Nigeria. The Boko Haram has released a video showing the first images of the kidnapped Nigerian schoolgirls since their abduction nearly a month ago. Close to half of the nearly 300 girls are seen on the tape.

For more, we go to Nigerian journalist Omoyele Sowore, publisher of the online news site SaharaReporters.com, joining us by Democracy Now! video stream from New Jersey.

Sowore, what’s the latest? Can you explain this video that you’ve posted on your website, as well?

AMY GOODMAN: And what about what they are saying, that they have the girls, that they’ve converted to Islam, and the progress being made in finding them? The president, President Jonathan, says that he is quite sure the girls are still being held in Nigeria, not moved to Cameroon and Chad.

OMOYELE SOWORE: Yeah, I believe that. I agree they have not been moved. And I said it. I’ve been saying it in interviews since last week. And I also mentioned that I do not believe that they’re going to sell them. It was just propaganda. And now he’s come out. Last week, Shekau came out and said he’s selling the girls. And now he’s saying, “Well, you know, the girls are here. They’ve converted to Islam.” I don’t also believe that. I don’t think that—there’s so much pressure on Shekau and—on Shekau and his team at this point that I don’t think they have any time to actually combat anybody. They’re on the run, not from the Nigerian government, sadly, but from international and world pressure.

AMY GOODMAN: That’s a critical point. We’ll continue to follow this. Omoyele Sowore, thanks so much for being with us, publisher of SaharaReporters.com, himself from Nigeria. We’ll link to the coverage of the schoolgirls at your website at democracynow.org. 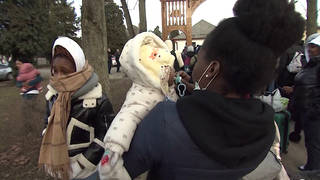