The world lost two remarkable men in May, two African Americans who helped shape modern history, yet whose names and achievements remain too little known. William Worthy, a journalist, died at the age of 92. Civil-rights activist Vincent Harding was 82. Each was a witness to some of the most pivotal events of the latter half of the 20th century. They led their lives speaking truth to power, working for a better world.

William Worthy became a journalist, working for both CBS News and the Baltimore Afro-American. He reported from the Soviet Union and would go to North Vietnam. As a Nieman Fellow at Harvard University, he ignored a U.S. ban on traveling to communist China. As a result, the State Department refused to renew Worthy’s passport. He would later travel to Cuba after the revolution there, where he interviewed Fidel Castro. Upon his return, he was charged with entering the U.S. without a passport. He challenged the charges and was eventually cleared. The federal appeals court opinion stated, “It is inherent in the concept of citizenship that the citizen … has a right to return, again to set foot on its soil.” U.S. Attorney General Robert F. Kennedy chose not to appeal to the Supreme Court, Worthy said, because “he and his brother [President John F. Kennedy] were sick and tired of the case. They had had enough embarrassment over it.” He was represented by a young ACLU lawyer named William Kunstler, who later noted that the victory in this case inspired him to continue in his path as a pioneering constitutional attorney.

In 1981, Worthy and colleagues went to Iran, after the revolution that deposed the U.S.-backed Shah, and after the U.S. Embassy hostages had been released. He obtained copies of paperback books that contained reproductions of CIA documents that had been shredded as the U.S. Embassy was overrun, but later painstakingly reconstructed. The 11 volumes were widely available in Iran, and as far away as Europe—but they were strictly banned in the U.S. Worthy’s copies were confiscated from luggage he shipped, but officials missed a volume in his carry-on luggage. After The New York Times refused to run a story on the CIA documents, investigative journalist Scott Armstrong at The Washington Post ran them on the front page. Armstrong told me: “There were documents in there that were unlike any other documents I’ve ever seen … it was an extraordinary insight into the history of overthrowing [Mohammad] Mosaddegh, the popularly elected leader of Iran; reinstalling the Shah, the CIA’s role in that; and then the cooperation that the CIA gave with SAVAK, the dreaded secret police of Iran. [They] essentially put a lie to every defense that had been given for the U.S. role in Iran over a 30- or 40-year period.” Worthy sued, and the U.S. government was forced to return the documents and pay him $16,000.

Vincent Harding was a close friend and advisor to Martin Luther King Jr. Harding told us on Democracy Now!, “King saw the natural connection between what was happening to the poor in the USA, why young men and women were rising up in anger, frustration, desperation, saw that action as deeply related to the attention that the country was paying to the devastation it was doing in Vietnam.” It was on April 4, 1967, one year to the day before King was assassinated, that he delivered a speech drafted by Harding, a powerful statement against the war in Vietnam. Harding said of the speech, “That draft essentially became the speech, sermon, call, cry of the heart that he put forward.” King said that day at New York’s Riverside Church, “I could never again raise my voice against the violence of the oppressed in the ghettos without having first spoken clearly to the greatest purveyor of violence in the world today, my own government.”

Vincent Harding sought to reflect in his speechwriting King’s enduring concerns: “He was calling us to a way that was very difficult, a way beyond racism, a way beyond materialism and a way beyond militarism.” Harding continued for decades after King’s death to fight against those very problems, as the first director of the Martin Luther King Jr. Memorial Center (now known as the King Center) in Atlanta, then as professor of religion and social transformation at the Iliff School of Theology in Denver.

These two men, William Worthy and Vincent Harding, saw immense social upheaval, revolution, struggle and loss. They dedicated their lives to challenging those in power, and to the pursuit of justice and equality for all. 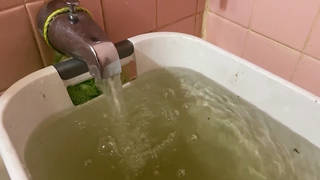