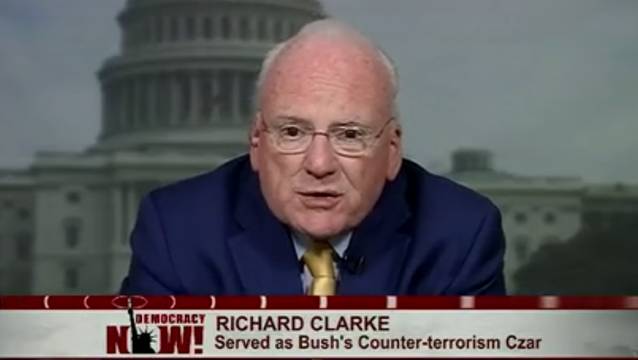 In a Democracy Now! exclusive, the nation’s former top counterterrorism official has said he believes President George W. Bush is guilty of war crimes for launching the 2003 invasion of Iraq. Richard Clarke served as national coordinator for security and counterterrorism during President Bush’s first year in office. He resigned in 2003 following the Iraq invasion and later made headlines by accusing Bush officials of ignoring pre-9/11 warnings about an imminent attack by al-Qaeda.

Clarke spoke to Democracy Now! in an interview that will air this week.

Amy Goodman: “Do you think President Bush should be brought up on war crimes [charges], and Vice President Cheney and [Defense Secretary] Donald Rumsfeld, for the attack on Iraq?”

Richard Clarke: “I think things that they authorized probably fall within the area of war crimes. Whether that would be productive or not, I think, is a discussion we could all have. But we have established procedures now with the International Criminal Court in The Hague, where people who take actions as serving presidents or prime ministers of countries have been indicted and have been tried. So the precedent is there to do that sort of thing. And I think we need to ask ourselves whether or not it would be useful to do that in the case of members of the Bush administration. It’s clear that things that the Bush administration did — in my mind, at least, it’s clear that some of the things they did were war crimes.”