According to a 2012 profile in Rolling Stone magazine by the late reporter Michael Hastings, the newly freed U.S. soldier Bowe Bergdahl joined the Army in 2008 after he first tried to enlist with the French Foreign Legion but was rejected. He was deployed to Afghanistan just after President Obama ordered the first troop surge in the spring of 2009. Bergdahl reportedly told a soldier in his unit, “If this deployment is lame … I’m just going to walk off into the mountains of Pakistan.” And on June 30, 2009, he may have done just that, leaving the base with just a knife and water, along with a digital camera and his diary. Within 24 hours, he was captured. We are joined by Sean Smith, an award-winning photographer and filmmaker for The Guardian who met Bowe Bergdahl while embedded with his unit in Afghanistan. Smith also profiled Bowe’s father, Bob Bergdahl, in the video we aired in the previous segment.

AARON MATÉ: We’re looking at the case of Bowe Bergdahl, the American prisoner of war released over the weekend in a prisoner swap. According to a 2012 profile in Rolling Stone magazine by the late reporter Michael Hastings, Bergdahl joined the Army in 2008 after he first tried to enlist with the French Foreign Legion but was turned down. He was deployed to Afghanistan just after President Obama ordered the first troop surge in the spring of 2009.

AMY GOODMAN: In June 2009, Bowe Bergdahl reportedly walked off his base in Afghanistan. He’s said to have left a note saying he had become disillusioned with the Army, did not support the U.S. mission in Afghanistan, and was leaving to start a new life. Within 24 hours, he was captured.

For more, we go now to London, where we’re joined by Sean Smith, the award-winning photographer and filmmaker for The Guardian. He met Bowe Bergdahl in Afghanistan in 2009 when he was embedded with his unit, and later went to Idaho to meet his father Bob, who he profiled in The Guardian video we just broadcast. In Washington, D.C., we’re joined by Colonel Morris Davis, retired Air Force colonel, resigned as the former chief military prosecutor at Guantánamo in 2007.

Sean Smith, let’s begin with you. Tell us about meeting Bowe Bergdahl in Afghanistan. Where did you see him?

SEAN SMITH: I met him briefly. He was with a group who were on an observation post, which was basically a hole in the ground at the top of a hill, for a few days. It was a short time. They were in pretty good spirits, all of them. They were kind of on their own. I think there was a couple of the other soldiers there early one morning on camera, questioned the mission—the whole mission, I guess, in Afghanistan, and what they were doing. I think the phrase was: “These people have been dicked around by the Russians for 17 years, and now we’re doing it. And I think these people just want to be left alone.” I think that’s roughly what was said. I didn’t hear that from Bowe at all.

I don’t know exactly what happened. I don’t think anyone knows that for sure now. I know when I heard about his capture, even the place was unclear. So I don’t know if it was the same—it happened about 10 days after I was with him. So, you know, there seems to have been quite a bit of speculation about what happened and him. I just don’t think much is—you know, it’s not all that clear, and I wouldn’t want to speculate and join that speculation.

AMY GOODMAN: That’s very interesting that you talk about the other members of his unit apparently having the same feelings that he would express, even though he didn’t express them to you.

SEAN SMITH: We put out a video in 2009, you know, with the guys saying that. I was in—I was about three months in Afghanistan. I went from being with the 501st—I mean, I was hoping I was going to spend a couple of weeks with Bowe and these guys. I then got pulled back and went to another area with the 501st and then went on to join the Brits with Operation Panther’s Claw. But, yeah, I mean, we didn’t know the circumstances. I found out sometime later.

AARON MATÉ: Well, Sean Smith, Bowe Bergdahl reportedly sent emails to his parents that suggested he had grown disillusioned with the Afghanistan War. According to Rolling Stone magazine, Bergdahl sent a final email to his parents on June 27th, three days before he was captured. In it, he wrote, quote, “The future is too good to waste on lies. … And life is way too short to care for the damnation of others, as well as to spend it helping fools with their ideas that are wrong. I have seen their ideas and I am ashamed to even be American. The horror of the self-righteous arrogance that they thrive in. It is all revolting. I am sorry for everything here … These people need help, yet what they get is the most conceited country in the world telling them that they are nothing and that they are stupid, that they have no idea how to live. The horror that that is america is disgusting,” unquote. In that email, he also referred to seeing an Afghan child run over by a U.S. military vehicle. Was it your impression, as some reports have suggested, that he was more interested in spending time with the Afghans that he was around than with the soldiers that he was deployed with?

SEAN SMITH: Well, as I said, in the time I was with him, they were a tight little group. I mean, I think the captain at the other end of the hill had said, “Hey, there’s these guys up on the hill. You know, they’re happy being up there and don’t want to be rotated down, even though the conditions are pretty basic.” You know, they seemed to be getting on very well.

All American military was being told to engage with the Afghans and try and, you know, learn a little Pashto to try and, yeah, have some understanding of the culture. So, you know, that wasn’t unusual. You know, those people came up to speak to them. You know, they were polite and spoke to them. We went to have something to eat with the Afghan soldiers, who were not that far away, one evening, which we weren’t really supposed to do.

But, you know, none of this seems—in terms of the email, I have not seen the emails. I don’t know about it. But in terms of questioning things, you know, there was a lot military who completely, 100 percent, this is—”We’re doing completely the right thing.” There was also a lot who were saying, you know, “I’m not sure. I think this is—the military is being put in a difficult, impossible position. And, you know, it’s not doable. It’s muddled and unclear.”

AMY GOODMAN: Now let’s talk about Bob Bergdahl. I want to go back to a particular clip in the video that we just played that’s on The Guardian's website, when he compares his son's detention, Bowe’s detention, to that of Guantánamo Bay prisoners.

BOB BERGDAHL: I don’t think anybody can relate to the prisoners in Guantánamo more, I don’t think, than our family, because it’s the same thing. My son is a prisoner of war. And wars end with reconciliation and negotiations with the enemy, and prisoners of war should be part of that dialogue. And I insist—I insist that it will be.

AMY GOODMAN: That’s Bob Bergdahl when you were filming him in Idaho. Last week, on May 28th, Bob Bergdahl posted a message on Twitter saying, “I am still working to free all Guantanamo prisoners. God will repay for the death of every Afghan child, ameen!” The tweet was subsequently deleted. But tell us about Bob Bergdahl back in Idaho.

SEAN SMITH: I think he’s—as a family, a very thoughtful family, I think they’re well respected in the community. I think they’re a family with a sense of sort of duty and patriotism and doing the right thing. I don’t think he chose to—he found himself in a situation, after his son joined up, where, you know, he, first of all, thought he needed to find out more about the war. After his son became a prisoner, I think part of his way of—the family’s way of dealing with it was to try and find out even more and follow things to try and find out about the people who were holding his son captive. I think his attitude was that, I guess, the country or the West had gone quite a long way from some of the things that were being talked about at the end of the Second World War, with the Nuremberg trials. I mean, you know, here we are marking the 70th anniversary of D-Day, which was—you know, the trials were after that, which was for a rule of law, for, you know, not just if you take people and you try them, and then if they’re found guilty, they’re put in jail, but, you know, certain procedures should be upheld. And I think his position would be that, if anything, things were being done in an un-American way. I hope I’m not—you know, I don’t speak for Bob or anyone, but that seemed to me to be what he was saying. 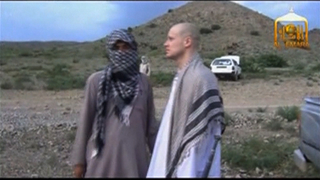